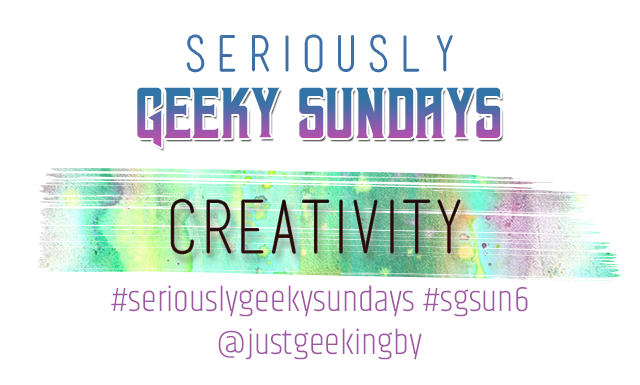 Welcome to week 4 of Seriously Geeky Sundays! It’s the last week of April and May brings a new bunch of questions. If you’ve not checked out May’s questions yet then take a nosey at them here.

My answers for week #4

What does creativity in fandoms/geeky interests mean to you?

While there is a whole bunch of creative processes taking place to produce a fandom in the first place, however, when it comes to creativity in fandoms and geeky interests for me is what fans bring to the table afterwards that mean the most to me. I’ve seen people spin complicated side stories in the form of roleplaying games and fanfiction, or build entire fansites and shrines filled with essays that speak to their passion and love for the subject. Then there’s artwork, crafts and graphic design which comes in so many amazing forms. In recent years as a blogger, I’ve become aware of fans using food as a media to express their love for a fandom.

There really is no limit to the creativity of fans and I’m here for it.

What is the most creative storyline you’ve come across?

This was a surprisingly hard question to answer! There have been so many storylines I’ve enjoyed, however, putting my finger on which were creative – or original as I chose to view it – was really quite difficult. I ended up writing the rest of this post and leaving this question blank because I was arguing with myself! I kept coming back to one answer and then feeling guilty as it wasn’t one of my favourite authors or fandoms. I realised that not choosing them didn’t make them any less my favourite it just made this one unique.

Without any more rambling… the most unique storyline I’ve come across are Living World Season 1 and 2 from the MMORPG Guild Wars 2. The Living World seasons are ArenaNet’s “official term for updates to the game intended to bring the world of Guild Wars 2 to life” and each update takes the form of an episode that the player plays through. I’m way behind with Guild Wars 2 so I’ve only played through a few of them (I’m not even sure which one I was on) and there are currently 5 seasons. The two I know I had completed blew me away with their creative and in-depth storytelling, and I’m looking forward to returning to the game to play the rest.

Who is your favourite arty/creative character?

Angela Montenegro from Bones is my favourite arty/creative character and personally I think she fits under both categories. Unlike the other squints Angela comes from an art background rather than science which offers her a completely different view of each case, beginning with her her being thoroughly disgusted by the state of the remains. Despite her aversion to blood and guts Angela never shied away from putting her artistic talents to any use that can help catch a killer.

Over the course of the 12 seasons Angela uses a vast collection of skills that show she not just a sketch artist. She is a fully fledged forensic artist and uses her skills as an artist to give an identify back to the unidentifiable remains the team often find themselves handling. She is also the creator of the Angelatron a real-time graphics simulator that analyses data to recreate situations. These range from scenarios, such a fight scenes or traffic accidents, to matching obscure weapons/tools to wounds and marks on a body. It’s an invaluable programme that the team often uses to break a case.

Other cases have required Angela to reconstruct audio or video files, and as the show progressed she continued to push herself to learn new techniques to help give a voice to the dead.

Who is your favourite quirky character?

There’s always a quirky character in every fandom and I tend to fall in love with most of them (there’s the occasional one that annoys the hell out of me), so this was a hard choice. In the end, though I went with Charlie Bradbury from Supernatural. Not only is she played by the delightful Felicia Day but she was just absolutely awesome. She was the queen of quirky, weird, geeky and generally adorkableness. I always felt that Charlie was on the audience’s side and was the character that said exactly what you were thinking. When Dean or Sam were being idiots she’d be right there to say it and she’d do with a whole load of sass poured on top.

She was one of a kind and she will always be missed (I’m halfway through season 14, so I know some spoilers but not all so don’t spoiler anything else for me please!).

Which fictional innovative invention do you wish existed in real life?

Teleportation of some degree. Whether it’s “beam me up, Scotty” Star Trek style, gates like in Stargate or any other technological waypoint system I’ve seen in video games; just some form of quickly getting from one place to another painlessly and without relying on someone else to do it.

What upcoming fandom are you most looking forward to?

There are two fandoms that I’m looking forward to, although they technically already exist. Both the Tortall Series by Tamora Pierce and the Kushiel Legacy series by Jacqueline Carey has been picked up as TV Shows. They’re two of my favourite book fandoms and I can’t wait to see them in live-action!

It has been an absolute pleasure to have you with me for the first month of Seriously Geeky Sundays and if you’ve not yet joined in I hope that you’ll consider doing so this month. Don’t forget to grab the new questions for May! First up is Freedom of the Press – Who is your favourite fictional reporter and which character would you like to see given a grilling on live TV? Check back next week to find out my answers.