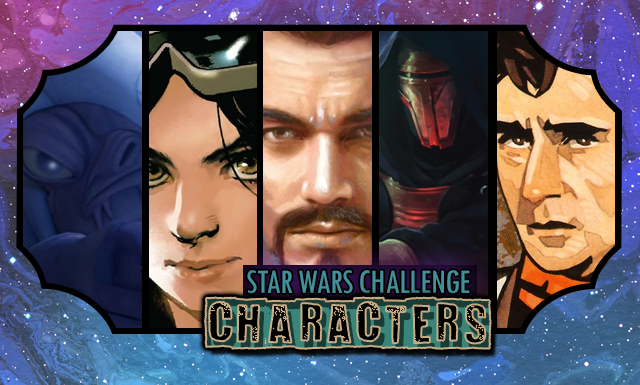 Hello and welcome to the first day of my Star Wars challenge! For the next 31 days, I’ll be posting once a day with a Star Wars themed post. Some days I’ll be talking about just one thing, other days it’ll be about 5 things based on the prompt of the day. I’ll be following the list of prompts below:

The first prompt is character and today I’m sharing with you some of my favourite characters from the Star Wars universe. As I’ll be talking about various characters throughout this prompt (Jedi and Sith have their own days, for example) I’ve chosen to exclude a lot of those characters from this list.

So here are five of my favourite Star Wars characters!

Whenever someone asks the question who’s your favourite Star Wars character everyone says Leia, Luke, Han, and so on. Me? I’m over there with Wedge. He doesn’t appear much in the Original Trilogy, however, in the Expanded Universe (now called Legends) Wedge is everywhere. He grows from an everyday starfighter pilot to someone who helps take down the second Death Star in the movies, and then in the Expanded Universe, his career goes even further. As one of the rebel heroes he’s called upon time and time again to help save the galaxy and it’s not just because of his fame; he’s got the skills to put his money where his mouth is too.

Eventually he ends up training a new Rogue Squadron, and the X-Wing book series is one of my favourite Star Wars series. It is absolutely hilarious, and if you enjoyed the space battles of the movie Solo you’ll really enjoy the action-packed starfighter scenes too. I always thought books about starfighters would be really dull and I took way too long to read them due to that. They’re anything but, and are rich in stories and character development.

In the new canon Wedge has sadly been ditched to the sidelines. He’s seen briefly in Rebels and he appears at the final battle of Rise of Skywalker (I cheered wildly), but that is it. I think that’s such a massive shame as a character like Wedge would never have been too far from the fight and clearly he still cared enough to do something because he turned up when Lando put the call out for help. Hopefully the gaps will get filled in with the novels and comics and Wedge won’t be entirely forgotten.

Originally introduced in Timothy Zahn’s Heir to the Empire, Talon Karrde is the best type of scoundrel. He has his fingers in everything and he is loyal to those who do right by him. He’s a smuggler and information broker and he’s damn good at both. As Han says; “You can’t even call your wife on a comlink without Talon Karrde hearing about it.“ Despite being a powerful player in the underworld Karrde liked to keep a low profile, but was always known for being a decent and honest man.

He helped those in need even if there was a risk to himself and that was how he ended up getting involved with The New Republic after saving Luke Skywalker’s life. He created the Smugglers Alliance to represent the interests of smugglers and act as a go between for the underworld and The New Republic. The Smugglers Alliance would become a valuable tool in the war against Grand Admiral Thrawn and was then revived to help in the fight against the invading Yuuzhan Vong many years later.

What I really appreciate about Karrde is how he’s utilised the underworld to the max. While he’s not afraid to get his hands dirty he’s made a profitable business out of trading in other people’s secrets and has done so by treating people decently. He works in the shadows but without compromising his honour code and doesn’t suffer anyone hurting his people. It’s not often that you find someone like him working in his line of business and it’s really refreshing to see.

The only character on this list who is from the new canon, Chelli Aphra first appeared in the Darth Vader comics series before spawning her own series. She is not the type of character that I typically like; she’s completely bonkers, most likely a sociopath, and has absolutely no morals whatsoever. She’s in it for herself and for the money 110% and always has an ulterior motive, and despite being one of the most selfish characters I’ve ever met she is absolutely fascinating. Her own comic series is a thrill ride of hilarity and twist and turns where she always gets in some sort of trouble and you’re watching to see how the hell she’s going to get out of the even bigger hole she’s dug herself into this time.

Gial Ackbar, also known as Admiral Ackbar, is a character that I’ve always had a great fondness and respect for but it wasn’t until watching The Clone Wars that I felt that I actually knew him. We finally got to learn about him as a younger Mon Cal fighting the Empire and in doing so we saw his heart and his spirit. In the Expanded Universe, he becomes a military hero and great strategist whose very appearance on the battlefield could make Imperial turn tale and run. Long after he passed away peacefully of old age fighter pilots and military leaders were still using the lessons and strategies he created. He’s known on the Internet for the “It’s a trap!” memes, but in the Star Wars universe Ackbar was a core member of the Rebel Alliance and the Galactic Republic that followed.

In the new canon, he was coaxed out of peaceful retirement by Leia to fight the First Order. He perished at the Battle of D’Qar in The Last Jedi along with the other Resistance leaders. Ackbar died as he lived; fighting for what he believed in.

I said no Jedi or Sith yet here’s a guy clearly holding a lightsaber, right? I decided to list Revan here because and he’s been called a Jedi and a Sith. Personally, I don’t consider him to be either and see him as the epitome of a grey Jedi. He has always forged his own path and it’s ended up tied up with the fate of the Galaxy for hundreds of years. His journey started in the video game Knights of the Old Republic I and is then continued throughout the MMORPG Star Wars: The Old Republic.

His legacy has lasted generations and in turn, has inspired others to follow his own path. Revan is a character that I feel I know a lot about purely through his legacy and what others have done in his name rather than knowing the man himself. There is a book that sheds even more light on the character and what happened to him which I haven’t read yet. I’ll need to get my hands on it at some point to unlock another piece of the mystery that is Revan.

I hope you enjoyed the first day of my Star Wars challenge! If you’re surprised by my choices today and are wondering where some of the other great Star Wars characters are, don’t worry! They’ll be plenty more familiar faces coming up as the rest of the month progresses.

Who are your favourite Star Wars characters? Do any of mine make your list too? Let me know in the comments 🙂

Image Credits: All character images are courtesy of Wookipedia.