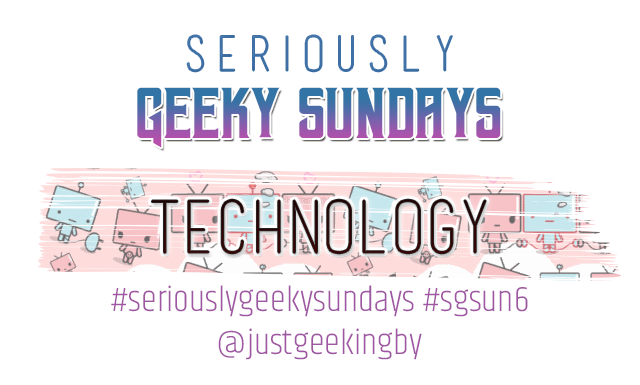 I think I say the same thing every month; I can’t believe it’s the end of another month! How many is that now? Three months of heartwarming, interesting and some time off the wall bonkers answers. If this is your first time joining me for Seriously Geeky Sundays you’ll not find anything quite like our participants’ answers anywhere else. We have a motley crew of bloggers from all sorts of blog genres and fandoms, and even with so many differences we quite often find similarities too. Such as the week three of us answered the exact same character for the first question, ahem.

Moving on! June has seen a variety of topics and we’re ending on a futuristic note with today’s theme inspired by Alan Turing’s birthday (which was actually last week, not today as the theme page originally said, whoops). If you’re not familiar with Alan Turing I really recommend reading up about him especially as it’s PRIDE month.

He was a British computer scientist who developed the Enigma machine during World War II. His work in computer science was groundbreaking and he theorised about artificial intelligence. Without Turing’s work, we wouldn’t be writing in our blogs right now, or have the internet. His research is what helped future computer scientists make the breakthroughs which led to so much technology we take for granted today.

And he was homosexual. That shouldn’t matter, shouldn’t have mattered, but he was born during a time when it was illegal in the UK and it still is illegal in some parts of the world today. He was eventually given a posthumous pardon in 2013.

Please remember to drop your link in the link-up at the end of the post. This is so other participants and readers can read your answers 🙂 Take a moment to check out the other links listed there too and read some of the fantastic answers by other SGS participants 🙂

Seriously Geeky Sundays is a brand new weekly geeky prompt that started in April 2020. If you’re new then head over to the SGS information page to learn everything you need to know.

What is the weirdest fictional technology item you’ve seen?

I’ve honestly lost count of the number of weird technology items that have been spawned from World of Warcraft thanks to goblins and gnomes. The one that came to mind straight away was the Gnomebliteration item from a quest in Cataclysm. In Uldum an expedition of gnomes have been infected by a curse and it’s causing them to seek dangerous ‘re-origination’ technology beneath Uldum – in other words, they’ll destroy the world if let to it. There’s nothing that can be done to save them, and they need to be stopped as quickly as possible.

To do this we’re basically given a modified fusion reactor core with an air bubble inside which will protect the user (us) from being vaporised and told to use it to destroy the cursed gnomes. The result is the big ball of fire in the image above ploughing through gnomes and rolling over them.

It is one of the most enjoyable quests in the game and absolutely hilarious, however, when you actually think about it. It’s pretty damn weird.

What is the most disastrous technological innovation?

Again, World of Warcraft springs to mind for this one. Anyone who has engineering will have memories of items suddenly exploding mid-use and most notably midair. Anything made by a gnome or goblin is going to explode at some point. The teleporter in Outland Nagrand was particularly worrying and was early on in the game’s history, so it was before I had begun to associated gnomes and experiments with disaster.

On Mechagon Island the mechagnomes and goblins are actually working together, and a collaboration of the two races is even more worrying!

Who is your favourite robot/droid?

I’ve already talked about my favourite Star Wars droids on several occasions now so I had to really think about this one. Then it came to me instantly; Bumblebee! I fell in love with Bumblebee when the first Transformers movie came out and then even more when Bumblebee came out in 2018, which I didn’t think was possible. He’s a complete sweetheart, loyal, hard-working and never backing down.

What fictional futuristic item do you think will become real one day?

Considering the way virtual reality and graphic designs are going I think holograms, such as the ones see in Star Wars, are a real possibility in the future.

What futuristic vehicle would you love to take for a ride?

I tried to think of something else, but honestly, X-Wings will always be top of my list. In reality, I’d be a terrible starfighter pilot and would probably puke after riding in one, yet the allure is just too strong to resist. Read more about my love for X-Wings here.

If you could have any character/celebrity be the personality for a supercomputer, who would it be?

I’m a sucker for Scots, and not just because I’m dating one. I love their humour, their personality and their no-nonsense attitude. I recently watched the Vanity Fair video below which is a bunch of British actors teaching their American (and sometimes their British) costars how to speak their native slang. I seriously recommend it because it’s hilarious to watch. But listening to Gerard Butler and James McAvoy explaining Scots words and Scottish slang (they’re two separate things as Scots is its own language) really made my day.

So as soon as I went to answer this question those two actors were the first to pop into my head. As much as I also love David Tennant he doesn’t quite have a Glaswegian accent as he’s from Bathgate which is over the other side of Scotland and is closer to Edinburgh on the east coast. I’m just far too use to Glaswegians now.

Anyway, here’s the video for you guys to check out! Feel free to ask me anything by the way 🙂