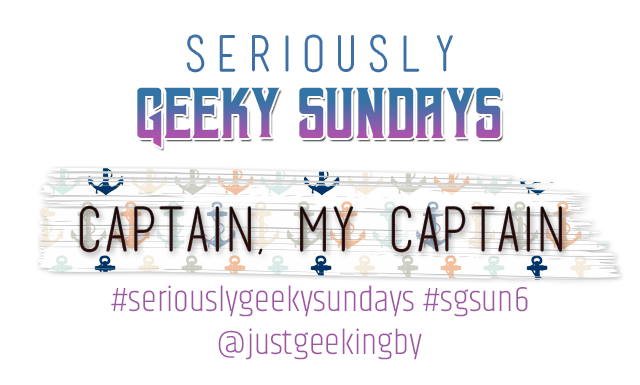 With Captain Picard’s birthday in two days, I thought it was a perfectly good reason to talk about the Captains of fiction for this week’s Seriously Geeky Sundays prompt. There are all sorts of Captains floating about the fandom universe from starship Captains, to military and Naval Captains, and those in between. I’m really looking forward to seeing what everyone comes up with for this week’s questions 🙂

Who was the captain of your childhood?

I already spoke about a certain green-haired Hare in week 2, however, the first Captain for me will always be Captain Planet – and yes, I’ve had the theme song in my head since I wrote this too. For those who have never heard of Captain Planet or experienced his super awesome theme song, I’ll explain a little.

Captain Planet is a 90’s cartoon about stopping pollution, and while that sounds really dull and political the cartoon was actually really awesome. I always thought that it had many more roots in Paganism and spiritualism than it ever did in science and environmentalism. The entire concept is that Gaia, the spirit of Earth, is growing weaker due to the constant damage being done to her by humanity. She sends out five magical rings, one for each element; earth, fire, wind, water and heart. The concept of Gaia and five elements (the 5th being spirit) are Pagan beliefs.

The rings are sent to five special people young people from around the world, and this was something that made this show truly unique; it was actually diverse. The main characters were not all white and American. I doubt the portrayals of each character were accurate as this was the 90s, however, even just having only one white American in the main cast was a big thing. The main cast included; Kwame from Africa, Wheeler from North America, Linka from the Soviet Union/Eastern Europe, Gi from Asia, and  Ma-Ti from South America.

And I’m going to leave you with the theme song so you can now get it stuck in your heads! 😀

When you think about captains who is the first one to come to mind?

Yup, it’s none other than the Captain of the fastest ship in the Galaxy. Han Solo. I’m not going to write any more because I literally just did that in my 30 day Star Wars challenge. Read all about why I love Han so much here!

Who is your favourite fictional captain?

Han Solo would probably be the answer for this one if I took the easy way out and cheated 😉 So thinking about it I realised that one of my favourites is a little more obscure. I absolutely loved this film, however, it got slated so badly which I really don’t understand. Morgan Adams is the main character of the 90s film Cutthroat Island, a female pirate who has to fight her way to a legendary treasure belonging to her father. She’s a kickass heroine who takes no prisoners, gives as good as she gets, and can match and beat any male pirate she comes across. She’s also clever, sassy and keeps fighting no matter the odds.

Honestly, I think this was just another film that came out too early and at the wrong time. If this film came out now after the whole Pirates of the Caribbean craze I think it’d do a lot better, especially as it has a female lead and the 90s weren’t ready for that.

Who is your favourite crew?

My favourite crew has to be the crew of the Waverider aka the Legends! One of my favourite Arrowverse shows, DC Legends of Tomorrow has an amazing crew that is constantly evolving and while I’m sad to see old crew members leave I’m also excited to see new ones join.

What is your favourite ship?

The Proudmoore Flagship that Jaina Proudmoore raises from the bottom of the Great Sea prior to the Battle for Lordaeron. It once belonged to her father Daelin and sunk off the coast of Theramore Isle. She raised it from its watery grave and went to war, appearing at the Battle of Lordaeron just in time to save the Alliance Forces and join them in Battle. Throughout Battle for Azeroth, she uses the ship as her flagship most notably at the Battle of Dazar’alor.

You can read about some of my favourite Star Wars ships here.

The last fandom you experienced has suddenly been cast at sea/into outer space. Who is the captain and who are their crewmates?

I had to dive back a bit to the last movie I watched because both my other fandoms (book and TV) have space ships in them /facepalm and I would be majorly cheating with this one. I mean, DC Legends AND Star Wars?! Talk about bad timing.

Last week I watched Spider-Man: Far From Home (loved it!) so that is what I’m going to use for this question.

First of all our crew are Peter Parker, Happy, Aunt May, MJ, Ned, Nick Fury and Maria Hill (I’m purposely avoiding spoilery stuff for people who haven’t seen the movie yet). As for who our Captain is, well we all know who thinks he’s Captain. Yep, Mr Fury himself. However, let’s be real here. No one on this crew is going to trust Mr cranky pants super-spy except Maria which means Peter is the natural choice for Captain. He’s going to insist on it being someone else, probably deferring to Fury, yet he’s the one person that most of the crew will trust. He’s the person that connects them all and that is ultimately the most important thing about being the Captain.

Those answers went in some completely different directions than I expected them to! I had a lot of fun answering this week’s prompt and I hope you enjoyed reading them too 🙂 Check back next week for some more as Seriously Geeky Sundays celebrates Father’s Day!

As always we’d love to have you join us next week for Seriously Geeky Sundays! You can find the full list of questions here.