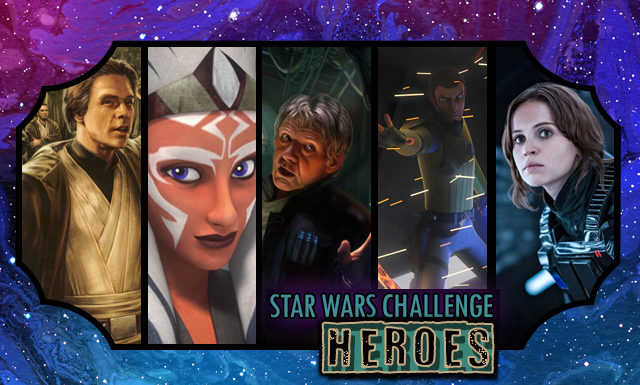 Hello and welcome to day twelve of my Star Wars challenge! For the next 31 days, I’ll be posting once a day with a Star Wars themed post. Some days I’ll be talking about just one thing, other days it’ll be about 5 things based on the prompt of the day.

Many of yesterdays Rebels are heroes in their own right, but I included Rebels and Heroes on the prompt so that Rebel characters got some love. Plus not everyone’s personal heroes will be Rebels. Incidentally, while mine are all Rebels other people might have completely different personal heroes.

Anyway, let’s get to the 5 Star Wars Heroes I admire most:

Let’s be clear that I’m talking mostly about Luke from the Expanded Universe and not the train wreck that Rian Johnson turned him into in The Last Jedi. I don’t hate the movie, and while I enjoyed Luke’s wise-cracking personality I agree with the sentiments of Star Wars alumni Sam Witwer. Like Witwer, I always felt that Johnson had no grasp of Luke Skywalker’s character, and his opinion that Johnson failed to do his homework is accurate. The decisions that Luke made regarding his nephew, even under the influence of Darth Sidious, were not in character. He was much more powerful in the Force and much too clever to not think ‘hang on a moment, there’s another way here’ especially when he redeemed his own father, Darth Vader. Vader was a murderer many times over whereas Ben was an innocent child. It just doesn’t add up.

Anyway, I digress. The Luke Skywalker I admire searches the Galaxy for force-sensitives and builds a Jedi Academy from scratch. He uses the meagre training he had as well as finding every scrap of information he can find pertaining to the Jedi that has been scattered across the Galaxy. He eventually becomes the Grandmaster of his order. He doesn’t get there without problems, mind you, even falling to the dark side himself at one point.

He always gets back up, dusts himself off and keeps fighting. Luke is someone who draws on the strength of those around him as well as the Force and he is someone who inspires love and loyalty. He grows into a wise and skilled Jedi, and when politicians force him to step down from the order he created he does so with grace. Not one to sit idly and mope, he uses his newfound free time to learn more about the Force to further benefit the Galaxy he’s sworn to protect.

In the Original Trilogy Han Solo appeared to be the unlikely hero, forced into a role by fate. As we learned more about the character we found out that he had always been a hero. After all, he had gained a Wookie life debt from his companion Chewbacca after saving him from slavery. The events of Solo: A Star Wars Story and Han Solo: Imperial Cadet only further prove that the handsome smuggler was born with the hero gene long before he met Obi-Wan and Luke in Mos Eisley.

Whether it’s in the new canon or the Expanded Universe Han Solo is a hero. On the outside, it may seem as though he’s just out to get paid, or loves the adrenaline he gets from taking risks. The truth is that he hates a bully and will always fight for the little guy. He has a strong moral code that he tries to ignore and often fails to. He’s just one of those guys that will always be a hero.

It took Star Wars Rebels for me to appreciate Ahsoka fully. I am not a fan of young characters unless, like Sabine, they act older than their years. It’s one of the reasons why you’ll not see Ezra Bridger feature in this challenge. I don’t dislike him, but I’m not a fan either. Until I’d seen her all grown up in Rebels I wasn’t able to appreciate and understand her as a Padawan in The Clone Wars.

I know that sounds backwards. The Ahsoka I remember from The Clone Wars movie always seemed so flighty and immature. Having seen her become a confident and mature woman allowed me to watch the TV Show and recognise the same qualities in her as a youth. I was able to recognise the hero I knew from Rebels in her actions as a Padawan.

Ahsoka is passionate like her Master, and there’s a comparison made between her and Bariss Offee while they’re both Padawans in episode 2.6. She’s not like other Padawans and that’s her strength. Ahsoka sees the world in an entirely different way and it leads her down other paths. I’ve yet to finish The Clone Wars and Rebels so I don’t know her full story. From Rebels, I know she leaves the Jedi Order, although I know none of the specific details. I’m looking forward to learning more and reading the Ahsoka novel too.

Kanan’s status as a hero was clear to me from the first moment he appeared on the screen in Star Wars Rebels. As reluctant as he was to use his lightsaber and announce his Jedi heritage it was clear that he would, it was part of who he was.  Kanan: The Last Padawan was a difficult read and a satisfying background to the Rebels character. It explains the tragic circumstances that led to the death of Kanan’s Master when Order 66 was issued and how he survived. Even though he was just a Padawan Kanan’s heroic nature was obvious. The clone troopers that served alongside him and his Master commented on his recklessness with one noting that perhaps that was just what they needed.

Kanan always puts people before himself, and if that means rushing headlong into danger so be it. With age he has learned a bit more caution, drawing on the Force before heading into danger. Being responsible for the crew of the Ghost alongside Hera has probably helped to temper some of his recklessness too; he’s no longer just responsible for his own life. As life changes for Kanan new duties and difficulties mean that he has to learn alternative ways of doing things, and while he struggles at times he continues to rise to the challenge.

I’m not even sure where to start with Jyn Erso. The other heroes on this list have done so much, saved so many people, and then there’s Jyn and her ultimate sacrifice. If it wasn’t for her and the rest of the team in Rogue One the Death Star would have reigned terror throughout the Galaxy. She really didn’t have to step up. She wanted to find her dad, and once she did she could have just walked away. She certainly didn’t have to lead a suicide mission for a bunch of people who wouldn’t officially sanction it.

How do you put that level of bravery into words? I’m reminded of Buffy the Vampire Slayer’s tombstone; “She saved the world. A lot.”

I give you Jyn Erso. She saved the Galaxy.

I realised when I got to the end of this list that it’s really morbid list. In the new canon, most of them die (I’ve not finished Rebels or Clone Wars yet, so no spoilers please!). That’s quite a worrying precedent for how Disney treats its heroes.

If you’re wondering why Rey or Leia isn’t on this list it’s because I’ve talked about them before! You can read about them here along with my other favourite Disney Heroines 🙂

Which Star Wars heroes do you admire and why? I’d like to hear your thoughts in the comments <3