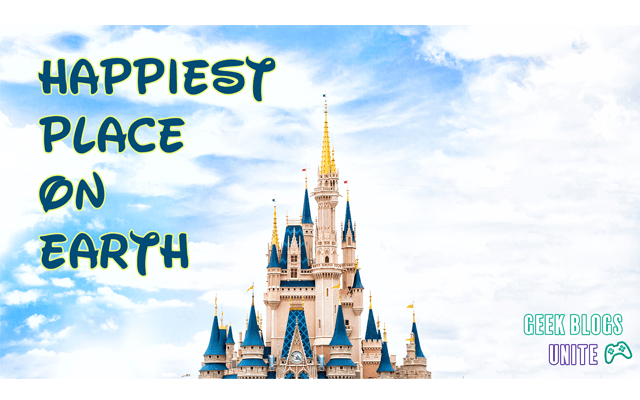 I’m taking part in Geek Blogs Unite themed topic about the Happiest Place on Earth, Disney! I decided to write about my favourite Disney Heroines, and you’re probably thinking, well yeah, of course, she’s a girl. Duh… right? That’s a little bit of it. I’m a girl, and a feminist, so celebrating women is something I like to do. However, the reasoning behind this post goes a bit deeper. Last year when Carrie Fisher sadly passed away there were a lot of quotes, memories and comments going around social media. One that stuck in my head was about how she taught a whole generation of young girls that they could fight, could lead a rebellion. I realised that was completely spot on for my generation, the 80s kids, and also that Disney heroines played a bit part in it too. This seemed a fitting way to start off this post considering Leia is now officially a Disney heroine too.

Growing up I wasn’t really a girlie girl, I was a tom boy and most definitely a rebel in the making in some ways. I’m sure many people who grew up with me will be laughing at that statement; her? That goody-two-shoes a rebel? That fact is that rebellion comes in many forms, and one is the lesson Leia and other Disney heroines taught me – it’s about fighting for what you believe in, forging your own path and doing things your way. Hopefully this post will give you a glimpse into what I mean by those sentiments. ((All images courtesy of Disney Screencaps and Star Wars Screencaps, edited by me. Font used is Mademoiselle Camille.))

Belle is probably the Disney heroine I feel most connected to; she has a warm heart, she sees things in others that they don’t see, she accepts outsiders, she is an outsider and of course, her love for books. For me, Belle is to be admired in the way she handles the situation with Beast. People have many issues with their relationship, suggesting Stockholm Syndrome for example, but I’ve never really considered there to be a toxic element to their relationship. The song ‘Tale as Old as Time’ sums it up for me;

Not every relationship starts with star crossed lovers meeting and knowing they’ve found their soulmate. Sometimes it takes a little work, someone has to bend, something changes. That is what I love about Belle; she’s stubborn, determined and sticks by her beliefs but isn’t afraid to make those changes, those compromises and give people a chance.

Megara is the other Disney heroine I feel a close connection to, and her song ‘I won’t say I’m in love’ was the theme song for my angsty teenage romances, and is still a firm favourite of mine. I completely understand how she feels when she sings “If there’s a prize for rotten judgement, I guess, I’ve already won that, No man is worth the aggravation” and “I thought my heart had learned its lesson, it feels so good when you start out”. Unlike most Disney heroine’s Meg is sassy and sarcastic, she’s not your typical princess waiting for a man to sweep her off her feet or to complete her life. However, underneath that attitude is someone who’s been hurt before and is longing for someone to love her for who she is.

I have always loved The Rescuers, and Miss Bianca is one of those Disney heroine’s I admired from afar and always felt that I couldn’t ever quite reach. So, why did she make this list? Because she’s a bad ass and she does it as a lady. She’s tough, she’s determined and she has the kindest soul. All she wants to do is help kids who need help, and she does it with sophistication and a heart filled with love. She sees the darkest parts of life and still keeps on fighting to bring light to the lives of children. That to me is someone to admire.

Mulan has so many life lessons that I’m not sure where to begin. There’s the whole lesson about following your destiny, being able to do a man’s job in a man’s world, honouring your family and so forth. However, for me it was Mulan as an outcast that struck a chord with me. The song Reflection is a musical soul search that still feels me with emotions. I’ve never fit in anywhere, and it was only in my late 20s/early 30s that I’ve begun to feel confident and content with where I am and who I am. I think also that the lyrics appeal to me as someone who suffers from depression;

With these lyrics in mind, when you think about everything Mulan accomplishes, her whole story can be seen as a metaphor for depression. There is light at the end of the tunnel. You can be who you see yourself as, who you really are. Is it going to be easy? No and as we see in Mulan’s case, there’s miles and many obstacles to overcome. That’s life, and Mulan is one young girl who doesn’t run from it; she faces it head on and kicks it’s ass.

It could be argued that Pocahontas falling in love with John Smith and leaving for the new world is a sign of weakness, of a woman letting a man lead her life. I have always seen it differently; to me Pocahontas is a strong independent woman who explores everything she can. She is attuned to the world around her, she’s curious, she’s open minded and has an open heart, and wants to learn. For her the next step is to leave her home and travel, to learn more and see what she can learn and teach others.

I love Nala, she is one of my favourite parts of The Lion King and my only complaint about the film is that she doesn’t get enough screen time. Nala is not fearless, she fears, she hurts, she worries but she doesn’t hide from it. When she leaves her pride to find help, she has absolutely no idea that her childhood friend is still alive. When she finds him she’s determined to convince him to do the right thing – for himself and for their pride. She’s the strength behind the leader, the one who isn’t afraid to smack him or push him into a river if he’s being an idiot.

Oh Leia, where do I begin? Growing up I never realised how young Leia was in the movies. It was only as I grew older and read the Expanded Universe books that I realised she was only 18 in A New Hope. I chose this iconic image of her from that movie because to me it represents everything about the character. Leia doesn’t necessarily need a weapon to fight, she uses her wits, her curiosity and more importantly her voice. She sticks by what she believes in and she uses that voice to call others to arms, to inspire them to be a better person and to follow their heart and their destiny. And she is the one who taught millions of young women that they could do all this no matter what age they were, no matter where they came from.

I don’t hate the prequels. I agree there are some issues, however, for me as a Star Wars fan they told a story that needed to be told, and introduced us to one of my favourite Disney Heroines; Padme. Padme is incredible, and I will always wonder just how much good Padme and Leia would have accomplished if life had ever worked out differently for them. Even younger than her daughter when she was elected ruler of Naboo, Padme was placed into a position of great responsibility by a cultural tradition that believed children “possessed a form of pure, childlike wisdom that the adults lacked” ((Star Wars Wiki – Monarch of Naboo)). Unlike her daughter, she had no influential family to provide her with opportunities and it was on her own merit that she gained attention. With the weight of her planet of her shoulders, she then had the added burden of the Trade Federation’s invasion and occupation of her planet. I’ve always wondered how many of her predecessors would have cracked under that pressure, or developed mental health issues after their time in office ended.

Through her relationship with Anakin we get to see Padme’s concerns, her worries and anxieties about fulfilling her role and helping her people. In The Phantom Menace a young Anakin asks her questions, not knowing that he is speaking directly to the Queen of Naboo rather than one of her handmaidens. Her answers show a strength of character that continues through the prequel films and The Clone Wars series. I also admire the many weapons that she has in her arsenal and she doesn’t wait for people to help her, or do things for her. In the arena on Geonosis in Attack of the Clones she is already moving, already rescuing herself while Anakin and Obi-Wan discuss their situation. She can fight, as we often see, but she is also one of the characters in the Star Wars movies that gives the most powerful speeches and remarks. Her remark on the death of liberty still gives me chills; “So this is how liberty dies. With thunderous applause”.

We know hardly nothing about Rey yet. We don’t know who she is, who her parents were, where she is from. None of that matters, because what we do know is that she is a survivor, a fighter. For me Rey represents the older me, the victim of bullying, the young woman who has struggled with physical and mental illnesses and survived. There’s nothing happy about Rey’s life prior to the events of The Force Awakens. She gets up, she scavenges, makes just enough to survive and then repeats it all again the next day. It’s a dark, hopeless situation that is even more depressing than Luke’s life before he met the droids. At least Luke had family, friends and hobbies even if he was stuck on a planet on the outer rim. Rey represents that part of us that is waiting for a moment, whether it be meeting a goal we’ve been working towards, that big break or a change in our situation. Her life has completely changed, she is on a new path and we are taking those steps with her – quite literally as we wait for the new film and subsequent information to be revealed about her. Rey isn’t perfect; she is terrified, she runs from the visions, she makes excuses to avoid change. When Han talks to her about leaving Jakku, she claims she can’t leave  because she’s waiting for her family (even though deep down she knows they’re not coming back). Rey is a heroine who is real, and for me, someone who is approachable and human. I can’t wait to see where her story goes.

I hope you enjoyed reading this and got an insight into my love for Disney, and how it has been an important part of my journey from childhood, to adolescence and now into adulthood.