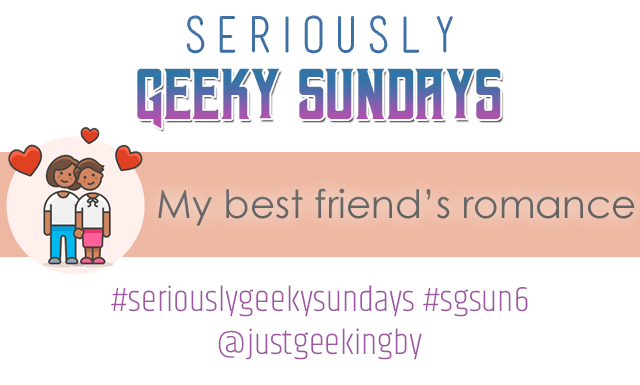 We’ve got all the tropes this month, and thanks to another national month event we bring Date Your Mate Month (I really wish I could make these things up…). In every fandom, there is at least one couple where a friend has dated their mate and sometimes it works, sometimes the results are disastrous. Join me for the very last Seriously Geeky Sundays (find out why it’s ending here) as I talk about fictional best friends who took the plunge and tried the dating game!

Name the last two fictional friends who ended up as a couple and tell us if it worked out or not.

I actually had to think about this because a lot of my recent fandoms have friends who are in that ‘will they/won’t they?’ stage, or almost there but not quite. So the last two fictional friends who ended up as a couple was a little while ago for me! They were from Shadow and Bone and since this has been recently turned into a TV show I’m going to pop this into a spoiler tag for those who’ve not seen the show yet.

I read the book before I watched the show and as you can see from my review I was not a fan of Alina and Mal’s relationship in the book, it’s toxic AF. In the TV show, it’s much more equal and the problems that I have with the book version have been removed. Mal realises he cares for her early on, he’s not running off with other girls right in front of her and they both fight for each other. As far as I know, they worked out. I’ve not read book two yet and as the show is brand new season two will not be out for a while yet.

Which two best friends make up your favourite fictional couple?

So many to choose from! Today I’m going to pick Annabeth and Percy from Rick Riordan’s Percy Jackson and the Heroes of Olympus novels because I feel that these two really do seem like best friends first, a couple second. I don’t mean that in a negative way, I just mean that they banter, bicker and mess around like best friends. She calls him “Seaweed Brain”, he calls her “Wise Girl” and they’re absolutely adorable, and 100% in love with one another.

What was the worst fictional friend hookup you’ve seen in a fandom?

This was the easiest question to answer; Xander and Willow from Buffy the Vampire Slayer. In my teens, it may have seemed sweet, but now I look back and I’m just like… what in hell’s name was that about?! Of course, it was going to end in disaster (quite literally as it happened in the show).

Who tried the dating game and ended up staying friends?

What I didn’t know until recently was that the author purposely destroyed this relationship when she realised it wasn’t working. I’m really glad she did because the couple that triumphed ended up being one of my favourites of all time. But before Alanna from Tamora Pierce’s Song of the Lioness quartet picked George Cooper she dated none other than Prince Jonathon of Conté. For a while, it seemed great and then Alanna realised that the Prince needed a Lady, not a Lady Knight, by his side. As with all first loves, it was heartbreaking and the way Pierce writes about it is just one of the reasons why this series is praised by so many people including some of the current bestselling young adult authors.

What dating experiment ended up a disaster and how bad did it get?

Chaol and Celaena from the Throne of Glass series by Sarah J. Maas is a good example of this one for me. It was a relationship that started out of a need for support and safety for both of them in a situation where neither really existed. So they grabbed hold of each other and clung on, and one thing led to another. Unfortunately, in these situations, it means things get messy when really quickly and end even messier.

The date your mate trope; in your opinion is it a yay or a nay?

For me, it really depends on how it’s handled. A lot of my favourite couples started out as friends who ended up falling for each other so I’d be a hypocrite if I said it was a bad thing. However, I would also be extremely naive if I didn’t recognise that it is a trope and with that comes a lot of stereotypes and when there are stereotypes there are problems. Women are portrayed as being the ones that break men’s hearts, as being cold, indifferent and unfeeling, and the men are often stereotyped into geeky, lonely and socially unsuccessful roles. And 90% of these relationships are heterosexual and lack diversity in other ways too – I spoke a lot about diversity in the representation topic so I’m going to stop there.

A lot of people become friends with someone before they start to date so the trope makes perfect sense to me, and I understand why I and others find it appealing. I just think that like everything in fandoms, especially in Hollywood, it needs work to actually represent real people.

Thank you to everyone for joining me for this week’s Seriously Geeky Sundays prompt and for any and all of the other weeks. It has been a pleasure to write these prompts and answers for you but all good things must come to an end, and new things will be coming from the void left by SGS so keep an eye out 😉

If you missed out on taking part in these prompts don’t worry because they’re not going anywhere! I’ve just archived them so that anyone can use them whenever they need/want to 🙂