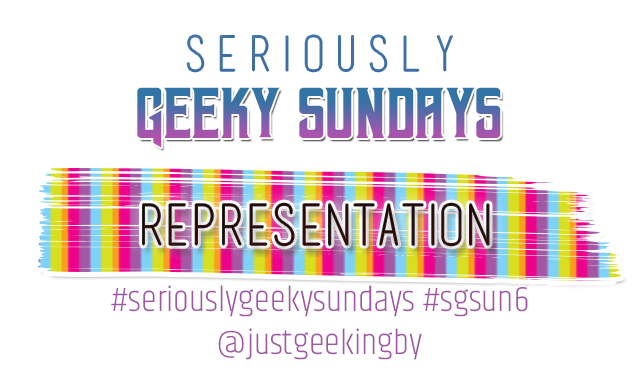 I thought long and hard about including this topic, so please know that these questions have been designed with the utmost respect by someone who understands the need for a respectful approach. As a bisexual disabled woman representation isn’t just important to me personally, it’s something I recognise as being important to other members of the disabled and LGBTQ+ communities, as well as other communities. It’s a topic that I firmly believe needs to be openly discussed not avoided.

Let’s start with a broad question; what do you consider representation in pop culture to mean?

To me representation means everyone being able to see themselves portrayed accurately in the characters and communities in pop culture. The important word there is accurate; it’s one thing to have a disabled character in a TV show, for example, but if that character doesn’t accurately represent the real disabled community it does more harm than good.

What representation existed in fandoms when you were young?

I grew up in the 90s and representation was very hit and miss. Looking back at it now I recognise that there were attempts to add some diversity into pop culture, and perhaps there were even some good intentions. However, this was the period when tropes such as ‘the token black friend‘ and ‘black dude dies first‘ were particularly noticeable. There wasn’t really any representation for the disability community or LGBTQ+ community. The later appeared in the late 90s in shows such as Buffy the Vampire Slayer, but prior to that, there was no representation of the LGBTQ+ community.

Do you feel that representation has improved since then?

Yes and no. There is certainly more representation, although whether those representations are accurate is often highly debatable. Representation is also not a one and done deal where including diversity in fandoms is just checking a box. Worldwide there are thousands of people who identify as different races, cultures, disabilities, religions, sexualities gender identities, and more – and many, such as myself, have several that overlap. There’s no one size fits all, no template that can be reused for diverse characters because as the name suggestions, they are diverse.

The best example I can give is one that is personal to me; disabled characters. I’ve yet to come across a disabled character that isn’t in a wheelchair or using walking aids of some description. That’s the template, the stereotypical disabled person who is unable to walk unaided. The problem is that not all disabilities affect a person’s abilities to walk, nor do they require walking aids. Unless you’re watching a medical drama (and even then they seem to get stuck on certain conditions – anyone else recall House MD‘s obsession with Lupus?) chronic health conditions don’t get any representation. Terminal conditions do because they make for such great drama.

The lack of representation of chronic illnesses, also known as invisible illnesses or non-visible disabilities, has a snowball effect. It means that there is a lack of awareness of such conditions leading to people being accused of not being disabled enough to use disabled facilities or blue badges for parking spaces.

Tell us about some of your favourite diverse characters.

Here are some of my favourite diverse characters:

What fandoms do you recommend for diversity?

When did you first feel represented in a character?

When I was about 10 or 11 my nan got a new set of porcelain dolls for her collection. These ones were inspired by the characters from Little Women and my nan suggested I should read it. I can’t remember if she bought it for me or if I picked it up myself, either way, I ended up with the whole series (there are four books).  I was a bit of a tomboy as a kid and struggled against my mum who loved having a little girl to dress up in dresses. I think my nan knew I’d fall in love with Jo when she recommended it.

It wasn’t just Jo’s tomboy nature that caught my attention. Here was a girl, then later a woman who wanted to learn everything. To read, to know stories, to find out how things worked. She was intelligent and there was a whole world out there to explore. It was the first time I felt like someone actually understood me; Jo was me.

Thanks for reading today’s Seriously Geeky Sundays post and I hope you enjoyed reading my answers for week #45 Representation 🙂 Next week we’re heading to Asia for another week of Around the World in 8 Sundays. Hope to see you there!

What are your thoughts on representation in pop culture?