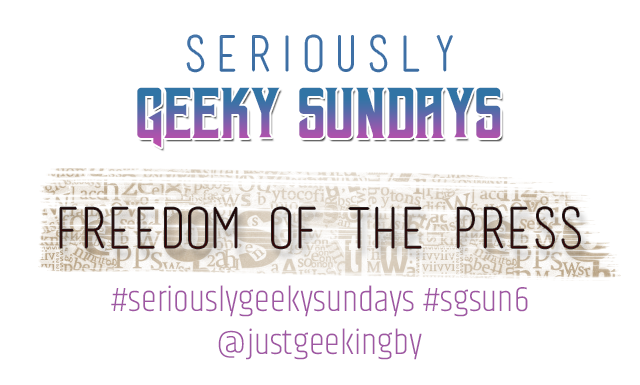 Welcome to Seriously Geeky Sundays Week 5 and welcome to a new month. May is finally here and as always I can’t wait to read everyone’s answers! As is fitting with a theme called Freedom of the Press you may find this week’s questions a little harder to answer, almost as though you were being interviewed yourself 😉 While I want SGS to be fun every so often there will be a little bit of a challenge thrown in. If you ever find a question too difficult to answer or you’re really stuck then just skip it. There are no right or wrong answers here.

Freedom of the Press

My answers for week #5

What is your favourite fictional media outlet?

I was going to go with The Daily Planet, and then I remembered this gem; The Midnight Hour from the Kitty Norville series by Carrie Vaugh. Kitty is a werewolf and a DJ for a late-night call show. She begins a talk about the things that go bump in the night rather than keeping them quiet, and people open up to her because of it. The show quickly garners a supernatural following from the supernatural crowd itself because it’s a place where they can call in and be themselves, talking under a theoretical guise about the pressures and problems of their lives. As with any talk show, the variety of calls are random and lead off on many tangents over the course of the series.

Who is your favourite fictional journalist?

Lois Lane. As much as I love Clark, there is no one who gets the job done like Lois. I’ve loved her since Smallville and the new Lois Lane comic series shows just how deadly a good investigative reporter can be when they get going. In a world of superheroes, Lois holds her own and always follows a story no matter where it leads – even if that’s straight into danger. One might argue that having Superman there to save you makes it easier to run headlong into danger all the time, however, Lois was doing these things long before she met Clark and she’d be doing them even if she wasn’t married to him.

She’s also completely unapologetically her. Lois is messy, her work is filled with typos, she’s impulsive and she’ll never be anyone’s perfect little wife. If you hurt someone she cares about she’ll punch first and ask questions later. One thing I’ve always respected her for is how she always rolls with the punches that life gives her. Before she knew Superman’s identity she would get over her initial shock and drag Jimmy to get the scoop on a story, and now that she’s neck-deep in the superhero world Lois takes whatever is thrown at her and keeps going. She may scream at it, she may hit it but she’ll always face the problem and look for a solution.

Who is your favourite fictional photographer?

It’s probably a stereotypical answer, however, Peter Parker aka Spider-Man is my favourite photographer. While I’ve yet to dive into the Spider-Man comics I grew up watching the animated series and he’s the first person I think of when I think of a photographer. I’ve kept up with the various cinematic incarnations and enjoyed each version, although I do have to admit that Tom Holland is my favourite. His absolute love for Spider-Man and enthusiasm for the character just shines through in his performance and everything he does. I’m looking forward to catching up with Spider-man: Far from home soon!

The image above is from the White Tiger comic written by Tamora Pierce, and I just found this scene absolutely hilarious. At this point, the White Tiger has no idea that Spider-Man is Peter Parker and hands him a camera innocently with a  ‘do you think you can manage that?’ attitude after he insists that he and his friends help her battle her enemies. I just love the look on Spidey’s face as if he’s looking at the camera as if to say ‘you call this thing a camera?!’ while his friends are laughing at poor White Tiger’s innocent ignorance.

What is your favourite fictional interview?

There have been many characters that have come and gone from Supergirl, but the one I miss the most is Cat Grant played by Calista Flockhart. She had so many memorable moments including the interview she has with Supergirl. It’s not a long interview and it happens right at the start of Season 1 when Kara is still trying to find her feet and as an expert journalist Cat is quickly able to force information out of Kara by badgering her with questions. Before she realises she’s admitted that she’s Superman’s cousin in a moment of weakness as Cat causes her to lose her temper.

The interview is one of my favourites because it shows the vulnerability of Kara and the amount of pressure she is under to walk in her cousin’s shadow. I often feel that as she was created after Superman she’s always considered lesser than him, a minor character in comparison to the great Man of Steel and this interview really highlights that along with the massive gap between men and women. Even as a superhero Kara isn’t free from being asked questions about having a family, and as time goes on we know begin to realise that Cat understands that all too well. It’s almost as if this was her preparing Supergirl for what was to come now that she had revealed herself, an older woman who had been there, done that, saying ‘this is the reality of what you’ve done, this is what they’re going to do to you and I’m here doing it first because I know and understand‘. It’s the start of their relationship which is so integral to the growth of Kara and Supergirl’s story as a journalist, a woman and as a hero.

If you could interview any fictional character who would it be?

To be able to sit down with someone and talk to them about their life experiences is something I’ve always considered a great honour, and for that reason, I always consider people who have a huge amount of experience to offer that differs from my own. Someone who has lived a completely different life, on another planet, or has lived aeons. The Life-Binder and leader of the Red Dragonflight, Alexstrasza meets that criteria. A dragon in World of Warcraft she has lived for thousands of years and through so much joy and hardship. She has lost so much and yet she continues to fight for Azeroth. To be able to sit down with her and interview her would be amazing and heartbreaking.

Which character would you like to see given an absolute grilling live on TV and why?

I think Sylvanas Windrunner from World of Warcraft is more than due for one. She has a lot to answer for and a good old political Frost vs. Nixon style grilling would be perfect – with some form of magical binding to stop violence in place, naturally.

The link-up opens on Sunday 3rd May 2020 and will remain open until Wednesday 6th May (GMT time zone).

Next week we’re heading into some easier territory as we’re talking about our favourite fictional families in honour of Mother’s Day in the US. There’s everything from families to legacies to those non-played/off-screen family members who you’d love to know more about. Join me next week to spill the beans about your favourites and find out who mine are!

Image Credits: Supergirl Screencap is from Melissa Benoist Updates, World of Warcraft Screenshoots are from my Screenshoot Gallery.