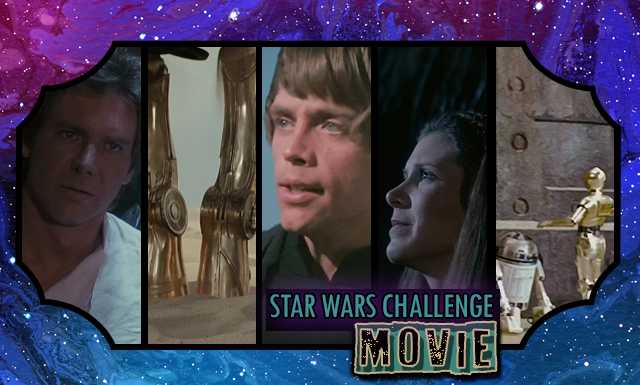 Hello and welcome to day three of my Star Wars challenge! For the next 31 days, I’ll be posting once a day with a Star Wars themed post. Some days I’ll be talking about just one thing, other days it’ll be about 5 things based on the prompt of the day.

The prompt for Day 3 is ‘movie’ and at first, I considered putting the movies in order of which one was my favourite. However, having only seen the new trilogy once each (twice for The Force Awakens) I honestly don’t know where I stand with them yet. While I don’t hate them they’ll never compare to the Expanded Universe to me and until I am able to appreciate them on their own merit without the EU overshadowing them it’s not fair to compare them to the other movies.

Instead, I’ve decided to talk about the undisputed favourite and the first Star Wars movie I ever got a glimpse of; Return of the Jedi.

Return of the Jedi remains one of my favourite movies of all times, and that’s because it has everything a good sci-fi and fantasy movie needs. It has a rescue mission, covert missions galore, a hero coming into his power and using that newfound power to take the fight to the bad guys. There is romance, friendship and good vs evil, and all of it comes packaged in some of the most amazing scenes that can be found throughout the saga

The film starts out with Vader arriving on the second Death Star, however, it’s the next scene that leads us into one of my favourite scenes in the Star Wars. It’s Jabba’s Palace on Tatooine and that’s what I’m going to be talking about today. In a scene reminiscent of A New Hope, two familiar droids are walking through the desert. This time, however, they’re not lost and know exactly where they’re going. While Threepio doesn’t quite know all the plan, Artoo quietly lets himself be shuffled off when Jabba ignores Luke’s holo message.

Jabba’s Palace offers an entirely different view of the galaxy to the audience, and there are so many layers within layers. No matter how many times I watch the film I still catch sight of new characters, new things happening. One moment the music is playing and the beautiful Twi’lek Oola is dancing, and the next she’s falling to her death. Then life moves on, the music resumes and everyone continues their business. In the background, Boba Fett watches as the Wookie Chewbacca is brought in, and we can only ponder as to what thoughts go on behind that mask. Has he spotted Lando amongst the guards? Does he suspect it’s all a ruse?

There’s a fantastic short story anthology in the expanded universe (Legends) timeline called Tales from Jabba’s Palace which features the untold stories of the denizens of Jabba’s Palace before and after the Rebels rescue mission. One story, for example, features Oola and Luke and makes her random death in Return of the Jedi more poignant. It’s a fantastic read and one of my favourite ‘Tales from..’ anthologies.

After Leia’s rescue attempt fails Luke uses the force to gain entry to Jabba’s Palace, and it’s immediately clear that the young farm boy has done some growing up. Between the films, Mark Hamill had suffered a facial injury during an accident which also changed his appearance. I think that made him look a bit older, a bit more mature as well and we were no longer looking at a kid from Tatooine. We were looking at a boy who had left a child and returned home a stronger, world-weary and powerful man.

I remember the first time I saw what Jabba had done to Leia; the shock followed by the anger and then recognising the fiery determination in her eyes as she remained graceful and dignified despite the circumstances.

Luke’s show of force in the rancor pit is impressive when you recall that he didn’t have his lightsaber and still hadn’t finished his training at this point. However, for me, his victory is just a stepping stone to get to the best parts. Dragged before a rather angry Jabba, Luke is reunited with a blurry-eyed Han and Chewie:

There are so many great quotes between Han and Luke in this film, showing their friendship and camaraderie while bringing a lighter note to the darker moments of the film. As the two of them are being sentenced to death they’re quipping away.

The same attitude continues as they ride towards the Sarlacc pit, a monstrous creature that swallows its victims and digests them for a thousand years:

Delivered with Harrison Ford’s infamous sarcasm, Han’s tone goes unnoticed by Luke as the Jedi begins to set the final steps of his plan in motion – and this is where it really gets brilliant. Even as an adult I still hold my breath as I watch Luke give that salute to Artoo, step off the end of the plank and watch the lightsaber pop out his domed dead, sailing through the air. I don’t let it go until Luke does his somersault mid-air and lands catching his lightsaber, lighting it up to reveal a brand new green blade.

Multiple fights break out as our heroes fight for their freedom and their friends; Leia throttles Jabba with a chain, Artoo fries the annoying little monkey, Luke takes out the henchman on the sail barge and Han, still half-blind, even manages to help out by knocking Boba Fett into the Sarlacc Pit. In the Expanded Universe he managed to escape, however, I’m not sure what his fate is in the new canon as of yet. He is mentioned briefly in the novel Aftermath as a diversionary tactic by another bounty hunter, but otherwise he is believed to have died in Return of the Jedi.

As amusing as it was to see him get knocked out of the battle so easily and completely by accident by the man he had been hunting, Boba is still a master of many arts and if anyone could find a way out of the Sarlacc Pit it is him.

After the extraordinary fight scenes our heroes ride off as the barge violently explodes in the background, a reminder of the warning that Luke gave Jabba in his message; profit or be destroyed. In stark contrast to the violence is a final moment of comedy as a little droid eye peeks out of the sand, and the camera view expands to show two shiny chrome legs dangling in the air. As the droids are lifted to safety the scene ends and our heroes depart from Tatooine once again reunited.

And we’re left wondering if there’s nothing they cannot handle after such a tremendous victory.

There are plenty of other moments throughout Return of the Jedi that I love and I could probably talk about it in great length for quite some time! Of particular note are the following;

I could do a whole post on each of those points and more, so I will leave it there for now otherwise no other days of this prompt will ever be done! I hope you enjoyed reading today’s post about my favourite part of Return of the Jedi.

Which Star Wars movie is your favourite?

Is there a scene in it that makes the movie for you?

What’s your favourite moment from the whole saga?

I’d love to hear your thoughts 🙂