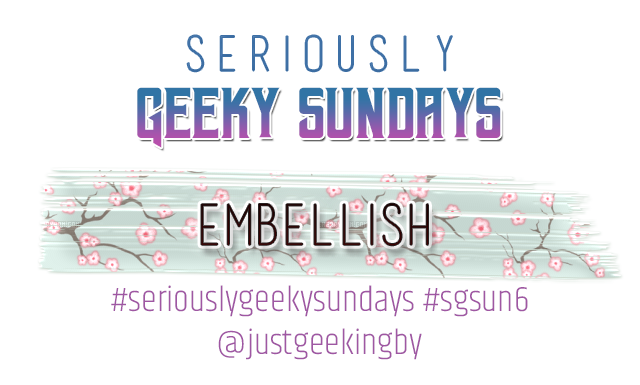 As I briefly explained in the questions for October this week’s Seriously Geeky Sundays prompt is stolen from a theme I was given for GCSE art way back when I was 16. Adorn, Decorate and Embellish was the topic and we’ll be getting to those other two parts of the theme in the next few months 😉 As for today it’s all about embellish which means making something more attractive by adding decorative details. What this means in regards to fandoms is talking about our favourite visual representations and locations!

I’ll be honest all it takes is a pretty city with some stellar architecture and I’m drooling. So I put a bit more thought into this answer rather than just picking the first pretty one that came to mind (and also I had to spread my answers out so I could use them elsewhere in this post 😉 ). With that in mind, I remembered the underground city that was revealed at the end of Sanctuary. Unfortunately, we didn’t get to see more of this innovative and beautiful city up close because the show was cancelled. The next season was planned to take place with the characters living and working in it.

The show revolves around the idea of creatures, Abnormals, existing among humans and the new Underground Sanctuary is the new branch of the Sanctuary network, a place where Abnormals can live peacefully beneath the Earth.

What natural location in a fictional world amazes you every time you see it?

There are plenty of gorgeous natural locations in World of Warcraft, however, it’s the druid order hall, the Dreamgrove, which amazes me. It’s stunningly beautiful and captures that ethereal quality of nature as wild magic and mixes it with the dreamlike qualities of the Emerald Dream.

Sometimes embellishment goes overboard; what is the most blinged-up fictional place you can think of?

This was a difficult one to come up with until I remembered this scene from The Great Gatsby. It’s an impressive display and Gatsby’s entire home is very impressive throughout the movie, however, it feels more like a blinged-up version of what we think the glamourous roaring 20s were rather than what it was really like. In this sense, the director has embellished the original description by F. Scott Fitzgerald to add even more glitz and glamour using modern technology.

And other times writers are just a little too good at their job; which spooky fictional location chills you to the bone?

I tried to avoid answering World of Warcraft again, but I’ll be honest, I couldn’t actually think of one! I’m going to be talking a lot more about spooky WoW locations at the end of the month, but for now, I’m going to share with you a zone called Nazmir from the last expansion. It is all sorts of spooky and inhabited with bloodthirsty trolls who drain their victims of blood in dark rituals. As a horde player, the storyline takes you through all their dark and corrupt antics as you work to stop them, including finding out the terrible fate of one of the Loa, a type of wild god in the WoW universe.

Pictured in the image above is the temple of Bwonsamdi the Loa of the dead and graves. His temple is under attack, and horde players work alongside him to gain a boon in exchange for cleansing his temple. It’s been designed so well to give the right feeling of reverence for the dead as well as remaining spooky and dark. Every aspect of Nazmir boarders on that chilling edge while also being quietly fascinating, that part of the dark that beckons to you to come and see what secrets it’s hiding. It didn’t scare me half as much until I did the quests as a horde player and found out what was in the dark…

Which adaptation got a location design spot on and which one failed?

The Vampire Academy film had a lot of problems, but one thing it got spot-on was it’s location and costume design. The design team did a truly marvellous job bringing the boarding school St. Vladimir’s Academy to life and it looked just like I expected it to based on the books.

The one that I felt failed was the City of Bones movie. The Institute design felt off and didn’t really fit with the vibe I got from the books. The version in The Shadowhunters TV show is much more in line with how I always envisioned it.

Which fictional location made you think room #goals?

It probably seems a bit strange to have a room from a video game raid as my room #goals, however, I rarely find a character’s preferences match up with my own. Whereas the entire aesthetic of The Nighthold in World of Warcraft is so on par with my own that I have an entire gallery of screenshots devoted to my love of it. This little nook, in particular, is perfection to me. It’s purple, mystical, has plenty of bookshelves and cushions for you to just curve up with a book and read away the hours!

Show us your Entry!

That’s it for week #29! I can’t believe that next week is number 30! Wowzers guys! Thank you to everyone for continuing to read, comment and take part in these posts each week 🙂

What is your favourite fictional location to look at?