Seriously Geeky Sundays #28 Where the wild things are 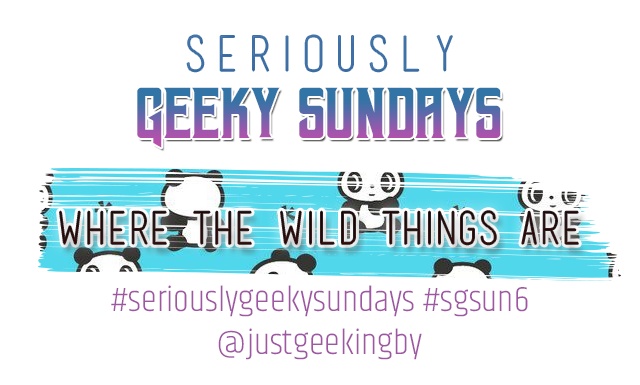 I’m a day late for the first time since Seriously Geeky Sundays started and it took a week of migraines to do it. Sorry for the delay in getting this one up folks, couldn’t be helped 🙁 Anyway, this week is dedicated to one of my favourite topics in fandom; animals and creatures! They come in so many different forms, from pets and loyal companions to side-kicks and quest givers to mystical beings and villains. It’s time to talk about where the wild things are 😉

Where the wild things are

Cats and dogs frequently feature in fandoms, who are your favourites?

Both of these come from DC Comics although from very different places! My favourite fictional dog is the El family’s very own super dog, Krypto. Like his Kryptonian counterparts, Krypto also has superhuman powers due to the yellow sun on earth. He’s a steadfast companion of all the El’s, and one of my favourite fan moments was seeing him brought to life in Titans!

In the feline corner, we have Dex-Starr, a Red Lantern and nothing like the loving and heroic Krypto. As a Red Lantern Dex-Starr is fuelled by rage, and despite looking like he’s an alien from far away planet he’s actually just a normal cat from earth. His human owner was brutally murdered and he was thrown into a river by hoodlums. His rage and sorrow were so great it was felt by the Red Lantern leader, Atrocious, who offered the cat a ring. He’s been sowing fury and destruction across the galaxy ever since.

Who is your favourite wild animal/bird?

I could talk about so many Disney sidekicks for this one, however, this little birb popped into my head and he fits perfectly for this question! Pepe is a bird that appears at random in World of Warcraft. There are achievements to find him and you can unlock an item, a toy, that allows you to call him to join you at any time. He does so by sitting on your head!

You can then find him in other expansions and holidays/events in various costumes, or buy them, and when you call him he’ll appear in costume. In the image above he’s in his Halloween costume dressed up as a costume. He’s gotten a rather large a cult following and at the last few Blizz Cons there have been Pepe meetups where people have brought along their Pepe plushies in their own handmade Pepe cosplays!

I just love how this one little bird started as this random little ‘find him’ game and became so much more to the World of Warcraft community. I talk a lot on twitter about how toxic the WoW community can be at times, but Pepe is an example of how awesome it can be too.

Tell us about a fictional creature that fascinates you.

I’m not quite sure what it is about hippogryphs, but they capture my attention a lot more than other fictional creatures. I mean, dragons are cool, who doesn’t think dragons are cool?! Yet there’s this beauty and grace to hippogryphs, and their connection to nature in the World of Warcraft universe just fascinates me.

Which mythological creature interests you the most?

Again, dragons and a lot of other mythological creatures are amazing, however, it’s the Fae/faerie that really interest me. I first came across them in Laurell K Hamilton’s Merry Gentry series and since then I’ve read so many different versions. My favourites include the Mercy Thompson series by Patricia Briggs, Iron Druid Chronicles by Kevin Hearne,  Dresden Files by Jim Butcher, and The Books of Faerie comics (pictured above), to name a few.

Linked directly to Celtic mythology, there are so many concepts of the Fae that have been explored by writers and so many more versions still to be told. As a creature, they’re both mystifying, wonderful and terrifying all wrapped up into one. They’re beautiful and deadly, and there’s just nothing like them.

If you could have an animal sidekick what would it be?

My animal sidekick would be a lioness. I’ve always been drawn to them and have gone by the online alias jadedlioness. I’ve always appreciated that the lionesses are the members of the pride that hunt and fend for the pride while the males do not. I also found out a few years ago that my Scottish Clan’s motto is actually “Beware the roar of the lion”, so it seems that lions have always been in my blood.

You’ve been given the magical ability to turn into any creature; what do you choose and why?

Despite being an air sign I’ve always had an affinity with water, however, I can’t swim very well at all. I’m also asthmatic so scuba diving isn’t possible. With this in mind, I’d like to turn into a Selkie and have the ability to explore the depths of the ocean while retaining the ability to return to land whenever I wished.

Thank you all for your patience and understanding for the delay, and for reading this week’s Seriously Geeky Sundays!

Who is your favourite fictional animal?