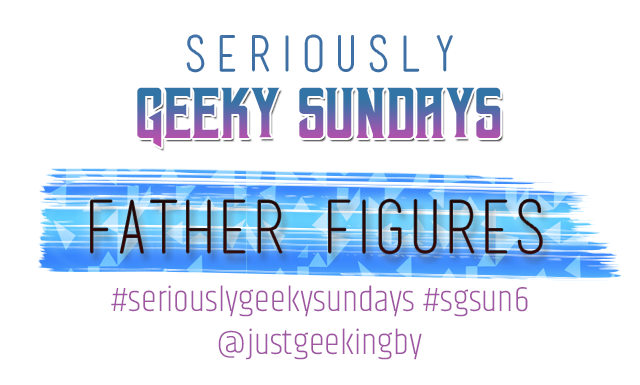 Last week I ended my last Seriously Geeky Sundays post by saying that this week was about celebrating Father’s Day. I want to correct that because when I created the questions for this week I purposely stepped away from the idea of everyone having a father in their life. I have people in my life who don’t, for various reasons, and I’m acutely aware of how they feel when Father’s or Mother’s day comes around.

So while this week is inspired by Father’s Day please don’t feel excluded if you are someone who feels that day isn’t for you. This theme is named Father Figures, not Fathers for a very specific reason. Father figures come in all sorts of shapes and sizes including female ones!

It’s the third Sunday of the month and you know what that means! July’s questions are now available 😀

Please also remember to drop your link in the link-up at the end of the post. This is so other participants and readers can read your answers 🙂 Take a moment to check out the other links listed there too and read some of the fantastic answers by other SGS participants 🙂

Who is your favourite fictional dad?

My favourite fictional dad is Clark Kent. I really love the scenes with him and his son Jon in the recent DC Comics, before and after, his age jump. Clark doesn’t have an easy job being Superman and raising a super son and I think what makes him such a great character to watch as a parent is he’s so genuine in the role. He’s a god damn superhero and yet he’s always second-guessing himself, always worrying about the impression he’s making, or if he’s making the right choice as a parent. There’s no ‘I’m a superhero so of course, I’m doing everything right’ arrogance in his parenting style.

It’s also based on everything he learned from his human parents, the Kents, which is just amazing. Again, this superhuman alien is raising a super-powered child and he uses the lessons and values taught to him by his normal human parents. None of this is surprising if you know Clark Kent at all, it’s just who he is and what he does. I just think it’s truly marvellous, and he doesn’t just keep all that goodness for his own son; he’s brilliant with all kids. He went all the way across the galaxy to save one little girl because that is just who he is. He is Superman.

Who is your favourite evil dad?

I promise I’m not going to answer with all DC characters! I was considering Ra’s al Ghul, and then I remembered this guy; Malcolm Merlyn. I’ve not seen much of Merlyn in the comics so my contact with him has primarily been from Arrow and he is a complete dick.

Solely driven by his own agenda without any care for what his actions would do to his own children, he always expected them to get in line because he told them to. Even when he had a chance of redemption with his daughter he managed to screw that up by drugging her and turning her into a murderer against her will.

Who is your favourite father figure/mentor?

This was an easy one; Sir Myles of Olau from the Song of the Lioness Quartet. Myles is an older knight, a scholar, who takes Alan/Alanna under his wing. He is the pages’ teacher for History and Law of the Realm and at some point, Alanna is assigned to his table at dinner. When she first comes to court he’s known as the court drunk and quite often part of her duty involves helping him back to his rooms after he’s had a bit too much to drink.

Over time their relationship develops and he becomes her mentor, helping her navigate the ways of the Palace, life as a page, then a squire and so on. Alanna’s father was never really in her life and Myles becomes the closest thing to her father that she’s ever had.

Who is your favourite unconventional father/mentor?

Technically this isn’t a DC character because he started in the Sandman Universe! 😛 John Constantine. Yes, you heard me; John bloody Constantine was/is a mentor. And if you’re wondering who on earth in their right mind would want Constantine as a mentor, or who would give him that job? Yep, it’s as bonkers as it sounds!

If you’ve been following my monthly updates for the last few months (including the epically long one for April and May) you’ll have seen me chattering on about Timothy Hunter and the Books of Magic. In the first issue of The Books of Magic Timothy is approached by the Trenchcoat Brigade (you can guess who came up with that name :P); Constantine, Doctor Occult, Mister E, and the Phantom Stranger. This group of magicians approach Tim to begin his magical training, warning him of the dangers of magic just as they show him the wonders.

Over the years Constantine keeps in touch with Tim, as well as keeping an eye on him because Tim’s destiny is to become the most powerful wizard that has ever lived. He will either save the world or destroy it. As you can imagine Constantine is the epitome of an unconventional mentor.

What is your favourite child/father scene?

My favourite child/father scene actually takes place after the father has passed on. It’s in World of Warcraft: Legion and it’s when King Anduin visits the Broken Shore, more specifically the place where his father, Varian Wrynn, was slain by Gul’dan. He finds his father’s sword, and Genn Greymane hands it to him. When he touches the sword he receives a vision of his father. Feeling lost and alone Anduin beseeches his father; “What am I supposed to do now?”

Varian replies; “What a king must do”.

What is your favourite quote from a fandom about fathers/by a father?

“Oh God, I’m a cliché,” he said in despair. “Why do I care? If Dad decides he hates me because I’m not straight, he’s not worth the pain, right?”
“Don’t look at me,” said Jace. “My adoptive father was a mass murderer. And I still worried about what he thought. It’s what we’re programmed to do. Your dad always seemed pretty great by comparison.”
“Sure, he likes you,” said Alec. “You’re heterosexual and have low expectations of father figures.”

Alec and Jace in Heavenly Fire, Book #6 of The Mortal Instruments by Cassandra Clare

I picked this quote because we spend so much of our lives worrying about what our parents think. Even if we have a good relationship with our parents we still constantly worry about it. Then there are extra hurdles if you’re LGBTQ+, or go through trauma, and sometimes it just feels like we always have something to explain even though we’re not children any more. Likewise, we can sometimes feel let down by parents who come from generations that refuse to change with the times.

Thanks for joining me for this week’s Seriously Geeky Sundays! Next week we’re heading into the realm of technology for the final SGS of the month. You can find the full list of questions here.

I just wanted to add a little note for anyone wanting to take part but can’t because Sunday is super busy for them. I had to pick a day so that there was some cohesion, but it’s not a big deal at all if you don’t post on a Sunday! It’s much more important to me that you’re having fun than what day you post on. That’s why the link-up is open until Wednesday midnight (GMT) every week so you can still pop your link in if you’re a few days behind. Even if you’re so late that you post on a Saturday that’s fine too. Or post a day early. Whatever works for you!

I hope to see you there next week 🙂