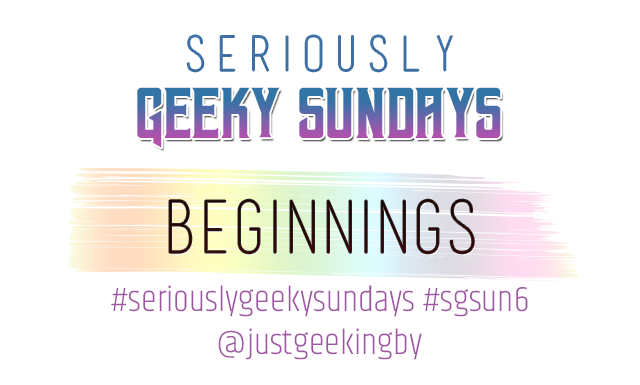 My answers for week #1

Let’s start with the basics; who are you and what do you do?

I’m Heather, 34, originally from London and now residing in Glasgow, Scotland since 2010. I’m a blogger and a freelance content creator. I’ve previously worked for Geek for the Win and you can see my work here. I use the skills gained in my Masters degree in Information and Library Science to help me build my articles.

When did you start blogging?

I originally started blogging way back in the noughties when I was in my teens. My first blog was hosted on my first ever domain artisticchardon.com. Yup, teenage me thought she was being super artsy and clever using a french word and didn’t realise the dire need for a hyphen in that domain name. I’ve used hyphens in my domain names ever since. If you’re curious you can read the angst-filled entries here courtesy of the Wayback archive, although please be warned that some posts may be triggering.

I stopped blogging and swapped to LiveJournal for a long time before eventually getting back into the blogging game with a World of Warcraft blog. Mind-Blast.net (archive here) started in 2009 and lasted for under a year. I reused the domain for multiple things over the years, and didn’t return to blogging until I went back to University in 2011.

2011 had been a rough year for me. I’d been in a job that had pushed me to my limits physically and mentally, working for a boss who not only didn’t care about my chronic illnesses but also emotionally abused me while I worked for her. My employment ended when I went through a massive pain flare up due to my hypermobile EDS and was physically unable to return to work. University represented not just a fresh start, it was a new adventure and a chance for me to experience things I hadn’t the first time.

That’s how this blog started in its original form; Ruby Wings Blog. It was my way of chronically my experiences and I eventually continued doing so through to my Masters. You can read my very first blog post and where it all began right here.

Then in 2017 when I was ill with ME and the blog was reborn as Just Geeking By.

Do you personally identify as a geek or nerd, or both?

You’re probably thinking she’s got a blog called ‘Just Geeking By’ and she’s running a prompt called ‘Seriously Geeky Sundays’, so obviously the answer to this is geek right? Well, you’d be partly right! While I’ve always gravitated towards geek rather than nerd, however, I identify as both in different ways.

To me being a geek is all about enjoying TV shows, movies, books, video games etc. and the stories, universes and characters that fill them. It’s even more fun geeking out with others about the fandoms I love. The nerdy side of me ties in with my academic interests. That part of me that likes to pull things apart, know how things work and always seeks knowledge.

I’m a total lore nerd when it comes to the fandoms I adore and that’s where I transcend from geekdom into full-on nerdiness. I’ve never been the science or math nerd though; humanities are my thing. I couldn’t tell you the technical specs of every Star Wars ship out there (and at one point that made me feel like a failure as a fan), however, I could tell you the history and stories of any character or alien species that owned that ship.

When did you first realise you were a geek/nerd?

Probably in primary school when I was more upset that the reading time at the start of class was over than any of the other kids. We were told to bring in a book and made to read it for 5-10 mins at the start of class every day. It was to encourage children to read, etcetera. The problem was that I didn’t want to stop reading. That’s when I began to realise that I wasn’t “normal” and as I moved into secondary school the boundaries between cliques became even more established, as they do.

When I was a teen the term geek was only just beginning to filter across the pond from the US. Freaks and Geeks aired when I was 13, for example, and we were just beginning to get access to the US shows at that point thanks to satellite TV and the Internet. Gradually geek and nerd would become part of our everyday lingo, but when I was a teen we were called boffins or boffs for short.

I’m not sure when I officially started using geek to express my identity, however, a particular turning point for me was leaving secondary school. I swapped schools to go to 6th form college at 16 and I distinctly remember feeling free of the neat little box I’d been put in since I’d started that school 5 years prior. The bullies were gone, the expectations on how I had to behave were gone and I could finally just be me.

That was the point where I finally excepted that I was different, I wasn’t “normal”, and that was ok. I was a geek and proud.

What was your first geeky interest?

Several things came to mind as I went to write this answer and then I realised every one of them was completely wrong. It wasn’t books filled with adventures, or 80s/90s cartoons such as Teenage Mutant Ninja Turtles, or even my beloved Star Wars.

No, it was Batman.

More specifically it was Batgirl.

I remember being a young girl watching the original Batman TV Show with Adam West and dreaming about being Batgirl. I have memories of watching an episode and then sneaking downstairs to the room with craft supplies, trying to fashion a Batgirl costume without my mum noticing. Naturally, as all mums do, she noticed I was up to something and embarrassed I abandoned the project. But there was something about that show and watching Yvonne Craig as Batgirl that caught my heart. Still to this day Batgirl and the Bat Family are one of my favourite parts of the DC Universe.

What was the first movie you watched this year?

The first movie I watched this year was Venom. It’s been on Chris’ to watch list as soon as he heard about it and I was also interested in watching it. While I grew up with DC, he’s grown up with Marvel so he knew a lot more about Venom than I did.

I watched the 90s Spider-Man cartoons and that’s about all the information I had to go on regarding Venom, so it a pleasant surprise for me to find that movie to be nothing like what I expected. I didn’t expect it to be so funny, nor that I would fall in love with the symbiote as a character. Really curious to see where a second movies goes, although we were both a bit confused regarding what the movie means verses Spider-Man and the normal origins of Venom. It’s beginning to get annoying with all the copyright and licencing laws involved with how things end up changed/reimagined in the movie just because of some legal mess outside of it.

To those of you who have joined me this week in participating in the first-ever Seriously Geeky Sundays; thank you! I can’t wait to read through your answers so expect some comment love coming your way in the next few days.

If you’re just hearing about Seriously Geeky Sundays it’s not too late to take part! The link-up is open for a few days for anyone who isn’t able to post on a Sunday, or finds themself meeting one of life’s hiccups. Next week we’re talking about Easter and Spring and you can find the full list of questions here.