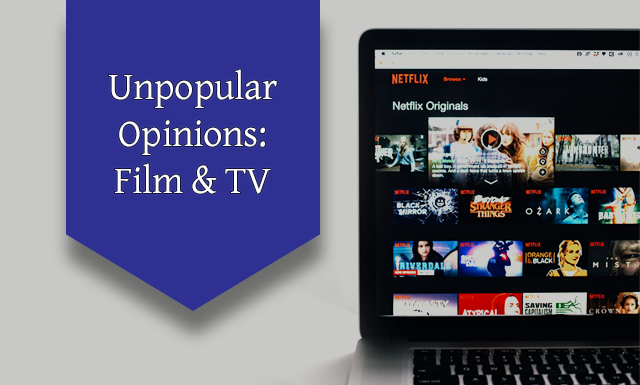 The Unpopular Opinions Film and TV tag was the winner of the fifth Blog Tag Game poll and was created by The Book Archer. Unfortunately, the original video is no longer available and I found the tag on Book Beach Bunny.

If the title isn’t clear enough I’m probably going to say something in this post that you’re not going to like, that is the entire purpose of the Unpopular Opinions Film and TV tag after all. I respect everyone’s opinions and I’m not going to bash anyone’s fandoms; I’m just going to answer the questions and explain my answers.

This tag was voted for by my readers which means they are interested in hearing my answers. I’m not answering this so that people can argue with me about my media consumption. If you don’t agree with me that’s fine; I’m sure you don’t like something I love too and you’re more than welcome to complete this tag to say as much! I just ask that if you choose to leave a comment you do so respectfully. Thanks 🙂

I don’t like Game of Thrones, there, I said it. I got through season 1, and started season 2, then just never went back to it. I know the story, I know what happens and it doesn’t interest me in the slightest. I tried to read the first book and was put off by the fact that it is exactly the same as season 1. I have a photographic memory so I find it incredibly difficult to engage with something if I already know what’s going to happen. The only exceptions being things that I enjoy i.e. screenplays of movies I love, adaptations I enjoyed or re-reading books I adore.

I simply just don’t rate George R.R.Martin as an author, and the way he writes and treats his female characters makes me feel physically sick. There are so many more amazing fantasy series out there and I feel that many Game of Thrones are clueless to their existence. I feel better knowing that two of them are coming to the big screen and I hope they’re done well so people can see what a difference strong, well-rounded female characters make to a fantasy series.

A Popular Show/Film Everyone Else Hates But You Love:

This was a tricky one for me because I really have no clue what is popular, however, I do recall a conversation with friends a few years ago about the Arrowverse DC shows. Apparently I’m in the minority for liking Supergirl. It might be because I was the only woman in the conversation…

Most of the time I’m usually pretty in sync with writers and agree with the character/s’ final choice. One notable exception to that rule was The Hunger Games Trilogy where Katniss picks Peeta instead of Gale. Sorry, Peeta, I was Team Gale the whole time and I think that match was terrible.

A Popular Genre that You Hardly Watch

I don’t really watch comedy on it’s own. It’s not that I don’t like it or that I have no humour, I just prefer my comedy to come along with other genres. I don’t like silly for the sake of silly (I can’t stand Adam Sandler), and if I do watch a comedy show it’s usually because my fiance is watching it.

Let’s be clear here; the question states dislike, not hate. I don’t like Tony Stark. Out of all the MCU characters and all of the Avengers he is the one I like the least. As I said, I don’t hate him. I just think he is a complete ass and an egotistical jerk most of the time. He has proven himself to have good qualities and yes, he’s saved the world a lot, but honestly, I’m not sure if he did that because he cared or just to prove that he was smart enough to do it. So yeah, not a huge fan.

A Popular Show or Series You Can’t Get Into

I just couldn’t get into The Walking Dead. I’ve never really been that interested in zombies in general to be honest and nothing about the first few episodes caught my attention. I’ve seen a few other episodes over the years while Chris was watching and normally I watch a bit of whatever it is over his shoulder, and again, nada.

The bully hunter trope. The sad fact of life is that people (not just kids, it happens to adults too) don’t stand up to bullies because they don’t want to draw attention to themselves. There are very few Captain Americas walking around just waiting for someone to step out of line so they can stand up for the “little guy/girl”. In the last few months the internet has seen so many videos of racially motivated attacks and I can only think of one instance where someone outside their inner circle has stepped up to defend them.

This trope is harmful to bullying victims. Why is no one standing up for them? Why aren’t their friends speaking up? It just leads to more dark thoughts of paranoia, depression and anxiety; I know, I’ve been there.

A Popular Show or Film You Have No Interest in Seeing

Another show that I got through a season and a bit that everyone is always super excited about when a new season is released is Stranger Things. I’ve tried to convince myself to just give it ago, to push past whatever is blocking me and it’s not worked. I think the biggest issue is that I grew up in the 80s. There’s no fun nostalgia for me especially when it’s filled with people smoking cigarettes in every scene. I’m allergic to them and spent my entire childhood extremely ill because my extended family smoked constantly around me. My dad also smoked but as soon as we realised it was making me sick he stopped around me, and when I was 13 he quit completely for my health. Most of my family still smoke.

A Movie or Show Adaptation You Prefer More than the Book

While I’m a big fan of L.J.Smith’s books I never liked the original Vampire Diaries series. When it got adapted for TV I was hesitate to try it an was pleasantly surprised when it turned out to be so much better. I’ve still yet to finish it, and I’ll always be a little irked by the fact that Bonnie was not a redheaded witch with Scottish ancestry, but the TV Show still captivated me way more than the books ever did.

Hopefully, some of you are still talking to me 😉 Did any of my answers surprise you? Let me know in the comments!

I’m tagging Megan, Pix, Winst0lf, GD, Pinkie and Solarayo – and anyone else who wants to take part!

Image Credits: Netflix image is from Unsplash, Blue star pattern is from Rawpixels.