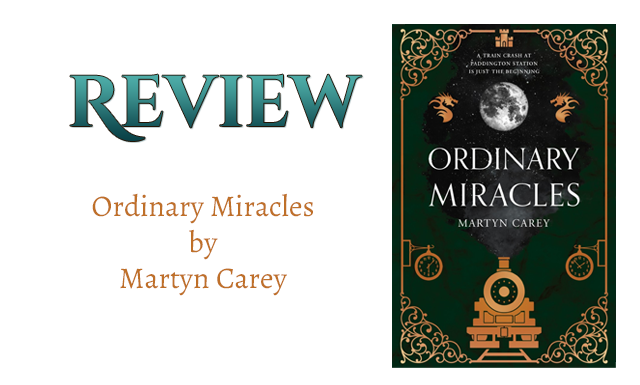 Ordinary Miracles was provided for free by NetGalley in exchange for an honest review. Many thanks to NetGalley and the publisher for the opportunity to read and review this book.

A train crashes at Paddington station. What follows is a series of dangerous and deadly magical incidents that no one could have predicted…
When wizard Mike Frost undergoes an unexpected elevation in his magical skills, he is sent to a training course to cultivate his newfound powers. But it soon becomes apparent that a deadly force is following his every move, using his power to launch devastating attacks across the UK.
Danger mounts, and it seems as though nothing can protect Mike and his friends. Time is running out. Can anyone find and stop those responsible before it’s too late?

I was drawn in by the cover which features a mix of symbols. There’s an old fashioned steam train, clocks, oriental style dragons, the moon and then a castle. Framed by ornate gilding it gives me a sense of magic and fairytales, of something old despite being a novel set in modern-day UK. As I’ve mentioned before UK based novels are always on my radar so that was a big selling point for me too.

What grabbed my attention was the suspense and mystery in the synopsis. It’s just dripping with it. What is going on? Who’s behind the incidents and what does it mean by no one could have predicted them? It’s a whole new magical world which I’m always up for learning about! Then there’s our protagonist, Mike Frost, who sounds like an ordinary guy who’s power level has suddenly jumped. By the sounds of it, that’s not a coincidence and the villain of the piece has involved Mike somehow.

Ordinary Miracles sounds like an exciting start of a new magical series and I just really hope it’s something new, not another Harry Potter or The Magicians style book.

Ordinary Miracles is a refreshing new take on magic that takes place in the UK, and if you’re under any inclination to read this because you loved Harry Potter, let me stop you there; this is most definitely not Harry Potter. It’s a fact that the author, Martyn Carey, weaves into his protagonist’s dry wit with charming ease. Mike Frost is a University student, both an ordinary student and a magical one. In the world, Carey has devised magical schools are connected to higher education institutions worldwide (usually via the archaeology departments, Mike informs the reader).

It’s a very logical system, and that is a common thread throughout Carey’s world-building. That’s not to say there’s no fantasy, magic or anything else fun; it’s a very clever and well-devised magical system which sets Ordinary Miracles apart from other magical novels I’ve read. Magic is based on physics and a mage is someone who has an active part of their brain that can affect the forces of physics in the world. For example, they can bend light, change gravity, and cause tectonic shifts.

Information about the way magic works and how it’s governed throughout the world is spread throughout the novel. While some of it is a bit science chunky in places the easy-going nature of Carey’s protagonist helps the reader to digest the more complex details. Mike is just an ordinary bloke whose life is thrown into complete chaos when he’s out doing one of the most normal everyday things. Sure, he’s a mage, but he’s still just a young man about to finish University and Carey has done a fantastic job embodying that authenticity in his writing.

Part of that authenticity is the strong British voice throughout which was wonderfully familiar for me as a British reader, and something I really miss when reading American writers. It isn’t overdone though. There’s no bloody this, or bloody that thrown in just to catch attention (i.e. Ron Weasley in Harry Potter). It’s a natural voice that feels right at home, and it’s one that touches all of Carey’s British characters. From comments about spell words sounding like “a pissed Glaswegian offering drinks in a Spanish bar” to the traditional clothes of a student from Bethnal Green, Carey’s wit is razor-sharp and always just enough.

I want to talk about diversity in the novel. The novel is set in Nottingham, East Midlands, and London, both of which have diverse populations. Universities in the UK also have thriving international communities. What I really appreciated about Ordinary Miracles was that it recognised this and didn’t make a big fuss. There is a wide range of diversity amongst the characters and it’s all just part of life. Mike’s brother is gay and it’s mentioned because his boyfriend is present in one scene. There’s no big drama, no issues with their parents, it just is.

The most important representation for me as a disabled woman was a disabled character. I’ll admit I had mixed feelings with the character, Amy, for several reasons. The first is that for 50% of the book her condition, hip dislocations so severe that she needed a wheelchair, was referred to as ‘the hip thing’. I have hypermobile EDS (Ehlers-Danlos Syndrome) and regularly sublax (partially dislocate) my hips. While it was amazing to (finally!) have a character who was like me in a book I felt confused and upset that her condition wasn’t named. EDS is just one of several joint conditions that causes dislocation and the dismissive title of ‘hip thing’ given by the protagonist and not by Amy herself was erasing part of her disability.

I became more troubled when I realised that Amy fit into two tropes; disabled girlfriend and miraculously cured. As the book continued I resolved my issues with these respective tropes. Let’s start with the first one; yes, Amy is a disabled girlfriend and yes, it is a trope. That doesn’t necessarily mean that every instance of a character that is disabled is a bad thing. While I have some reservations on how the naming of her condition was handled I don’t hold the same feelings towards how she as a character was written. She wasn’t babied, she wasn’t pitied or desired so someone could play the hero. Quite the opposite in fact. She is seen as a person not a disability throughout the novel, and there are a lot of details given about living with someone with a chronic illness which I, as someone living with 7 of them, really appreciated.

That brings me to the second trope which sounds rather troubling, and it ended up not being as bad as it sounds. Amy has hip dysplasia and what first appeared to be a miracle cure via magic was actually more like magical surgery. It’s made clear multiple times that she’s not clear and she suffers further dislocations after the treatment which shows that her dysplasia is still very much there. Considering there are surgical options available for hip dysplasia what happens in the book is simply just a magical adaptation of reality rather than a trope being played out.

There are two things overshadowing the diversity present in Ordinary Miracles which the more I thought about them the more I couldn’t just put down to me being pedantic. Firstly, the characters of each nationality and race have stereotypical names. You’ve got Patrick the Irish guy, Nadia the Asian woman and Catriona the Scottish woman hailing from, you guessed it, Edinburgh.

Then there’s Sam the Chinese student who is written with an accent that borders on racist; “Sometime spell better, sometime not spell. If thing too heavy, need too much power, can’t lift”. While Carey’s Briish accents are spot on, his non-British accents are terrible. The American teacher Terry-Ann Wicks was particularly painful to read. The difference between them is that they don’t authentic at all, feeling mocking instead, which is a shame. Everything else about this novel doesn’t feel that way. The way diversity and disability have been integrated into the novel, as a part of life, not a plot device, shows an author who is at least aware of the bigger picture.

So, what happened with Sam? I’m not sure. Her strong Chinese accent doesn’t even make sense as she has been working with Mike since the first week of University, and while she is younger than him, they’re both nearing the end of their degrees. That means she’s been in the UK for at least 3-4 years. Considering magical abilities at her disposal she has a much easier way of learning the language than an average student. There is really no reason for her to have such a broken accent.

Overall I really enjoyed Ordinary Miracles and the book ends with the suggestion of this being the first book in a series. I’d be really interested in reading more about the world and Mike and his friends, however, it needs some work first. The published listed on NetGalley is Matador which is a self-publishing service and that doesn’t surprise me. When I looked up the author I found an inactive twitter, a dead website and zero information.

While this novel, and it’s author, has a lot of promise, I feel that several corners were cut in order to rush this to publication. It needs the spit and polish of an experienced editor and the process of beta readers before getting published.

Thanks for reading my review of Ordinary Miracles. I hope you enjoyed it! What do you think of a magical system based on physics; yay or nay?