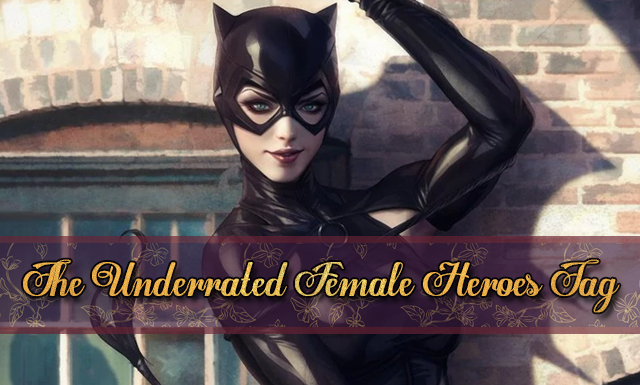 The Underrated Female Heroes Tag was the winner of the sixth Blog Tag Game poll and its one that has been on my radar for a while now. It was created by Melting Pots and Other Calamities.

1. Name a heroine you like, but whom you feel is always overshadowed by the male characters in the story

Kristine Kochanski was added to the main cast of Red Dwarf in series VII and struggled to keep up with the all-male cast until the show ended in series VIII. When it was brought back Kochanski was noticeably missing from the line-up. Whether that’s because she wasn’t well-liked as a character, fans always wanted the original Kochanski played by actress Clare Grogan or they couldn’t get Chloë Annett back to play Kochanski, I don’t know.

But anything can happen in the Red Dwarf universe and not being able to get the original actress back didn’t stop them before. The fact is that Red Dwarf is a boys club, and while I love the show, Kochanski was always overshadowed by the rest of the male cast. She was written to be smarter and more proficient than them, and also to be the brunt of all the jokes as a result. It’s something that the writers could get away with in the 90s, whereas now, I would like to think it would probably be questioned.

2. For that matter, name a heroine whom you feel is always overshadowed by the other female characters in the story

Shandris Feathermoon in World of Warcraft is the epitome of an underused character. The leader of the entire Night Elf military, the Sentinels, she was dumped on Feathermoon Isle for the majority of the game’s history. Finally in Battle for Azeroth she was given a chance to shine and even then she was overshadowed by multiple other female characters.

While she played a large part in the Alliance War Campaign she felt more like a random NPC, a lackey, than the experienced commander that she is. Her role is overshadowed constantly by Jaina, Tyrande, Maiv and even Kelsey Steelspark a much newer character with less combat experience. I like each of these characters and enjoyed their storylines, however, the writers didn’t give Shandris her time to shine. Tyrande even puts Maiev in charge of reclaiming Ashenvale rather than her foster daughter, a move that makes no sense at all.

She’s always seen accompanying someone, supporting them, rather than being the one supported. It could be argued that after the destruction of Teldrassil she is no longer a General of anything, however, Night Elf troops are seen after that tragic event suggesting that she still has some Sentinels to command.

3. Name a character who had potential but was greatly underutilized in her story

Bela Talbot from Supernatural was a short-lived character who fits this description. Such a great character in season 3 who made a deal with a crossroads demon as a teenager to escape an abusive home. She became involved with the Winchester brothers when she stole The Colt from them. Her time on the show was short-lived as she was hunted down and killed by hellhounds. She was a great character who had so much potential and was really underutilized.

As mentioned in the Unpopular Opinions Film and TV Tag I’m not a big fan of the original Vampire Diaries novels. I especially disliked Elena who was basically a blonde bimbo who fell for the Salvatore brothers. She was completely one dimensional and her TV counterpart is a massive improvement.

5. Name a character who you want more backstory on

I want to know more about Selina Kyle aka Catwoman. In recent years there’s been more about her as a teenager (Gotham, Under the Moon: A Catwoman Tale etc.), however, no one seems to have ever asked how she became such an amazing thief. More importantly; where did she get the skill set to be able to give Batman, of all people, a run for his money? Of all of Gotham’s villains, she’s one of the few that has been able to keep up with him physically. Yet it’s never been asked how a street rat from Gotham got to that stage. People only seem to care about her tragic childhood.

6. Name a character with traits you feel are sadly overlooked by everyone

I only recently learned about Miiyahbin Marten aka Equinox from DC comics and when I looked her up I expected to find that she’d been in a bunch of older DC titles I’d just not read yet. I was really surprised to find that she’d literally just been created for Justice League United and then completely ignored. Equinox is a Canadian superhero with Cree ancestry that the Justice League of America meets while on a mission in Canada.

To use the power of the Midayo Miiyahbin speaks the word “Keewatin” and she transforms into the superhero Equinox. As Equinox her powers are formidable. She has a strong elemental connection to the land, especially to her home, although she is able to draw on this connection anywhere including in space. The scope of her powers changes with the seasons meaning that what was seen in Justice League United was only a glimpse of her potential. She’s seen using elemental projection and flight, but as she’s only just become a superhero and is still learning to use these powers who knows how much more she is capable of?

It’s been years since Equinox debuted in Justice League United and she has been completely forgotten about by DC since.

Faye Chamberlain from The Secret Circle, whether it be the original novels or the TV show, is my choice for a morally grey character. Her TV adaptation is pretty accurate to the books, and to be honest, Faye is pretty much a selfish power-hungry bitch at times. Or at least that’s what she likes people to believe. Beneath the uncaring persona is a scared young woman who makes some bad choices and eventually ends up realising where her loyalties really lie.

“Imagine Anna Wintour meets Mata Hari, with a touch of Yoda and Chuck Norris,” was how one of the NCIS: LA team described their boss Henrietta “Hettie” Lang to one of the new recruits in the latest season. Hettie is a legend in the world of spycraft, and I’m surprised that she doesn’t get featured in more articles. Played by the wonderful Linda Hunt, Hettie cares for her team, gets results and is a force to be reckoned with. She also plays things to close to the vest which causes a lot of friction with her team.

9. A character from a piece of fiction you’re amazed isn’t more famous

Phèdre nó Delaunay is well known by fans of Jacqueline Carey, but to those who have never heard of her books or picked one up, she’s just another unknown fantasy character. Those who have an inkling of what the Kushiel Legacy series is about have a tendency to just slap labels on her because she’s a courtesan. There’s a lot more depth to Phèdre and the novels, but they need to be read with an open mind.

I really enjoyed talking about some of my favourite female characters and giving them all some time in the limelight. This tag was a great chance to talk about some characters and fandoms that I don’t normally chat about. That’s one of the things I love about blog tags because, I don’t know about you guys, but I really suck at trying to come up with these things on my own without any prompts to go by. My mind just goes totally blank.

Who is your underrated female hero?

We’re heading towards the end of July and that means that the last Blog Tag poll is now up! Find it below and get voting!

I am tagging Nana, Winstolf, Megan, and Panda and anyone else who is interested 🙂