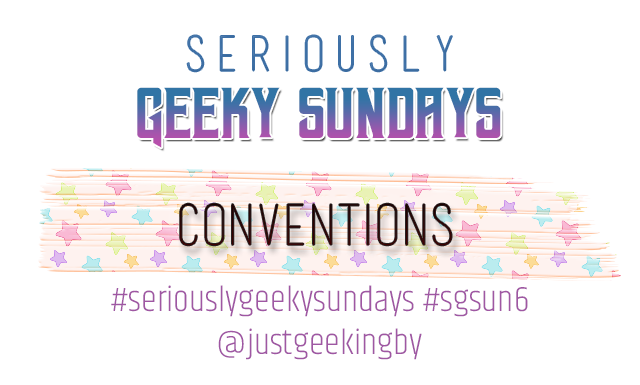 When I created this week’s Seriously Geeky Sundays questions I anticipated there to be a comic con like normal, instead due to COVID-19 SDCC and all the other events this year have been cancelled. While it’s given us the first online comic con that’s free for everyone, a lot of us have missed out on conventions and events we usually go to each year. I personally feel that it makes this week’s topic even more important because right now it can be really difficult to remember the good times, especially when there’s always that one person saying ‘it’s going to be cancelled again next year anyway’ /sigh.

So please join me in sharing your convention memories with everyone and if you’ve not had the chance to go to an event I hope you’ll have fun reading everyone’s posts. As a disabled blogger with anxiety I know how overwhelming large events can be so I wanted to say I’m always available to answer any questions anyone has as well.

It’s the last week of July and Seriously Geeky Sundays will be heading into August next week. so make sure you’re ready to roll for next month by grabbing the new questions here.

Seriously Geeky Sundays is a weekly geeky prompt that started in April 2020. If you’re new then please head over to the SGS information page to find out more!

Have you been to a convention and if so, how many?

What was the last convention you went to?

The last convention I went to was Halloween weekend 2019 and was Sci-Fi Weekender 10 part 2. Due to problems with the previous site the company had to change locations and due to the inconvenience they provided two events instead of one in 2019. We went to the normal one in March and then to the free one at the new location at the end of October. We’d planned to go back there in April 2020 but as with all events this year it was cancelled due to the pandemic.

What is your favourite convention memory?

I’m really fortunate to have quite a few. I previously spoke about meeting Carrie Fisher and Peter Mayhew at London Film and Comic Con and those moments will always be special to me. But my favourite memory happened at Blizzard Entertainment World Wide Invitational in Paris 2008. It’s the only “Blizz Con” style event that Blizzard Entertainment has ever done in Europe, and while there have been other Invitationals they’re usually Esports events. It was also the first convention that Chris and I ever went to together so it was really special to us having met in World of Warcraft.

It got even more special when we were sitting down resting in one of the sitting areas and none other than Mike Morhaime the CEO of Blizzard Entertainment himself comes along and sits down next to us! We were totally gobsmacked as you can expect. He was also taking a break, busy avoiding fans who were hassling him constantly for an autograph. He didn’t say as much, he was far too nice to do that but we saw it in action when one group spotted him while he was chatting to us. He didn’t have a pen, theirs didn’t work, or something and I tried to find one of mine. Of course, all of mine had magically disappeared.

It felt really rude to ask him for one (or a photo) since he’d sat down to chat with us which he really didn’t have to do. While I regret not getting that autograph, I’m honestly just really honoured that he took the time out of his day to ask us how we were doing, what we thought about the event and so on. Everyone rolls their eyes when he does his speeches at Blizz Con, but if you’ve ever met the guy he really is just that down to earth and a gamer at heart. He was just so excited and happy to have people having a good time. That was what was important to him, and if you want to be cynical and say that things have gotten worse at Blizzard, well, I personally would say it’s because this guy is no longer at the helm.

So yep, I’ve had the privilege to meet a lot of lovely people at conventions but that wonderfully random chance meeting still tops the list.

Which convention would you love to go to?

All of them would be my answer if it was possible, but realistically, if I could pick just one it would be Blizz Con. Feeling that buzz of excitement being around so many fellow World of Warcraft nerds in Paris was amazing. Chris and I would play a game where we’d try to guess who played what just by looking at them, and I remember meeting some other players in a resturant too. We’ve been on several meetups with our guild too since then and they are always a blast. There really is nothing like being with your guildies and geeking out with other WoW players.

Unfortunately, going to the US is expensive and it’s a really long journey. Both of those are problematic in different ways so I don’t see us managing it any time soon. Also, with a certain person in power right now I don’t really want to visit the US anyway even for an epic convention.

Who are you hoping to see at a convention next?

So we’ll be heading to Sci Fi Weekender in 2021 hopefully and the line up includes Sophia Myles and Paul McGann which I’m really looking forward to.

Generally speaking, I’d love the chance to chat with George Mann the author of the Newbury and Hobbes series some more. I didn’t get much of a chance to talk to him when I met him last time and I’d just started reading the series. Now I’ve completed it I have a lot more to say!

Other authors I’d love to meet are Tamora Pierce, Marianne Curley, Jacqueline Carey, Kelley Armstong, Kevin Hearne and Timothy Zahn. Celebrities; it’s such a long list. Naturally any Star Wars actors, anyone from any of the TV shows I love, several movie stars. I’m not really one for putting people on pedestals. I’ve learned the hard way not to expect too much from meeting your heroes especially your childhood heroes.

What is your favourite purchase from a convention?

I don’t have a singular purchase that means more to me than anything else yet. But I do love this hat I got from Pam’s Happy Hats at Sci Fi Weekender. Pam makes all sorts of wonderful crochet and knitted geeky goodies. I got this wolf hat and Chris has a BB-8 hat, and we both love them.

Thank you for joining me on my walk down memory lane for this week’s Seriously Geeky Sundays theme. Conventions are an important part of being a geek for me as they’re the one time I get to go out and fully immerse myself in the geek culture. Being disabled means that it takes a lot of energy and planning for me to do the smallest things so going away to an event is great because everything is all in one place. I don’t need to worry about having access to things or finding somewhere to eat because it’s all there.

That’s what I love about the Sci Fi Weekender especially. It’s hosted in a holiday park so if I get tired I can just head off to our rooms and rest then go back to the event. No travelling across a city to the hotel (which I’ve done a few times and absolutely hated).

What event/s were you planning to go to this year and are they rearranged for next year?