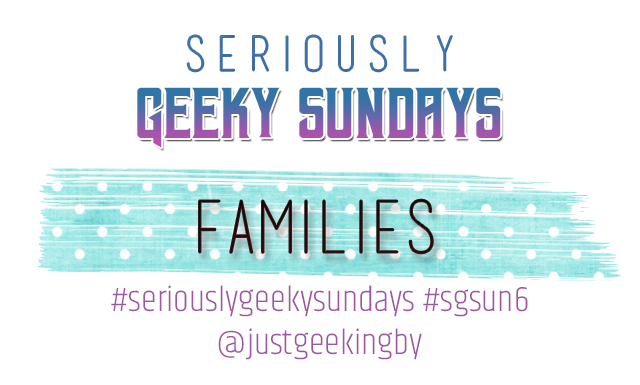 Welcome to week 6 of Seriously Geeky Sundays and I’m honestly super excited for this week’s theme; families! Families are at the core of every fandom I love, whether they’re biological or the ones that characters have made for themselves, and I love seeing where legacies end up. I particularly enjoy fandoms that follow the story of multiple generations of the same family. Read on to find out which families top my list of favourites!

My answers for week #6

Who is your Favourite family?

As an only child and the black sheep of my own family I acutely understood Harry’s pain and loneliness, and have always loved the welcoming Weasley family. To me they are the epitome of what a real family should be. They’re not perfectly by any means, they always have each others back (Percy not included). Once you’re adopted by the Weasleys you’re family for life.

Who is your favourite unconventional family?

Naturally, it’s the Bat Family, proving that blood isn’t always thicker than water. The Bat family has grown to include so many more people than just Batman and the Robins and it’s fantastic. In turn, each of the Robins and Batgirl has their own extended family through the Titans, Teen Titans, Birds of Prey, and the Outlaws.

Which off-screen/non-played family member would you like to learn more about?

Up until the Harry Potter Hogwarts Mystery, Charlie Weasley was top of my list, however, that game fixed that one for me. Since watching Rise of Skywalker Palpatine’s son has been on my mind instead. I’d really like to learn more about him, how he came to be, who his mother was and what the events were that led to him abandoning/hiding his daughter on Jakku. How much about his father’s real nature did he know? Was he always against Palpatine or did he suddenly turn from him? So many questions!

Who are your favourite fictional grandparents?

Frank and Henry are played by the wonderful Tom Selleck and Len Cariou, and they bounce off each other marvellously. They also have some great moments of wisdom with each other, and their respective grandchildren as one of Frank’s sons and his daughter have kids. Every Sunday the Reagan family meet for Sunday dinner without fail and there is such a great genuine dynamic between four generations at the table. It never pretends to be anything other than it is; real family is messy and family doesn’t always agree.

The two grandfather’s love their family, and they butt heads with each other and their family members a lot. They also play tricks on each other, and together against the other members of the family. They’re both widowers and they get on each other’s nerves, but there’s a lot of love too.

What extended family/legacy is your favourite?

I absolutely adore extended families/legacies as I said, but there is always one that wins over any other; the Skywalker/Solo family from the Expanded Universe (now called Legends). Han and Leia married and had twins, Jacen and Jaina, followed by a younger son Anakin. Then Luke married Mara Jade and had a child called Ben.

I always thought it really odd that Leia and Han named their child Ben after Obi-Wan Kenobi when neither of had any real relationship with him. Other than Han sharing a quick trip through space with him, and Leia sending ‘General Obi-Wan Kenobi’ a message there was no actual relationship. In the Expanded Universe the children’s names were much more thought out and explained (Jaina was Han’s mother, Anakin was named after Leia came to terms with her father’s childhood in the events of Tatooine Ghost).

The Skywalker/Solo family continued for another 100 hundred years in the pages of the Legacy comics with Cade Skywalker, Luke’s descendent, and Ania Solo, Han and Leia’s descendent. Sadly the change in canon when Disney took over meant that those series ended.

Take the main character from your last 5 shows/movies/games/books (etc.) and create a family with them.

Ok, so I’ve been reading comics, playing a game and watching a bit of TV so here’s my cast:

Lucifer Morningstar, the devil himself from the Lucifer comic series.

Sara Lance aka the White Canary from DC Legends of Tomorrow.

Bruce Wayne aka Batman from Batman and the Outsiders.

As the father figure, Bruce is a natural fit. It’s what he does already, and as the leader of the Scions of the Seventh Dawn, Minfilia has a tendency to act motherly at times. I can see her working well alongside him as a partner, not being put off by his duty because duty is one of the most important things to her as well.

Lucifer is definitely the rebellious, naughty uncle who turns up randomly to cause trouble. That leaves Sara and Aphra as the children and I can see them being sisters that have completely opposite ways of looking at the world. Sara’s out there trying to save the world and Aphra’s out there wrecking it.

The link-up opens on Sunday 10th May 2020 and will remain open until Wednesday 13th May (GMT time zone).

After a week of migraines, I’m glad this week had some easier questions compared to last week! If you’re interested in hearing more about my Star Wars thoughts I’m taking part in a Star Wars Challenge throughout May. There’s plenty of Skywalker/Solo family goodness (I recommend checking out the Star Wars books I recommend if you want to learn more their family) and I talk about Palpatine too.

Please don’t forget to take the time to check out the other participants in the link-up. There are some fabulous answers every week and it’s a great way to meet new people 🙂