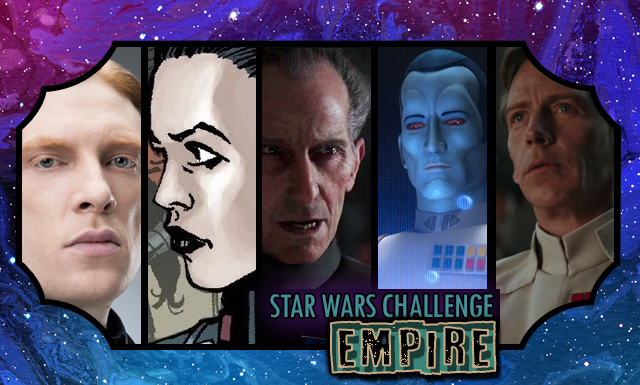 Hello and welcome to day ten of my Star Wars challenge! For the next 31 days, I’ll be posting once a day with a Star Wars themed post. Some days I’ll be talking about just one thing, other days it’ll be about 5 things based on the prompt of the day.

It’s Day 10 and it’s time to look at the men and women who make up the Empire. As you may have guessed from the title of this post I have a love-hate relationship with these characters. I’m a firm believer that darkness, evil, whatever you wish to call it, needs to exist otherwise we would have no comprehension of good. This is especially true in stories and Star Wars is a universe where good and evil is particularly important.

However, things aren’t always that black and white and that’s especially true of the Empire, and one thing the new canon has done really well at is fleshing out many aspects of the Star Wars universe that were originally lacking. The Expanded Universe touched on it previously with the heroes of the rebellion continuously being referred to as murderers of the “innocent” troops aboard the Death Stars when they were destroyed but in the new movies, the stories of Finn and Hux offer a much more personal and psychological experience. Their experiences differ immensely and both respond to them in very different ways, yet unlike the previous Trilogies, their experiences are included. They’re not random personnel who remain nameless or have a name simply for the sake of identification.

I’ll stop there because that is heading into essay territory 😉 Please read on to find out which Imperial characters made it into my shortlist.

Hux is a terribly complicated character who on the surface is a whiny brat second only to Kylo Ren at times. But there was something about him that caught my attention. I think it was in The Last Jedi when he was suddenly forced to accept Kylo as the new Supreme Leader, something he never saw coming, and he did it through gritted teeth. He knew how much power Kylo held and having worked closely with him he knew exactly how unstable he was, so he went along with it. That didn’t stop him from yelling “That’s enough. That’s enough! Do you think you got him?” at Kylo at the Battle of Crait when Kylo hit Luke with a barrage of laser bolts.

When I learned more about Hux’s childhood he became more intriguing and I began to understand him. Constantly abused by a father who was labelled a hero in the Empire, young Armitage could never do anything right. It is no surprise that as an adult he is obsessed with his appearance and proving his worth. In an alternate world if he had been saved by someone outside the Empire Hux may have grown up differently, instead the Empire was all he ever knew and it was the only place he could ever learn to excel in. It doesn’t excuse his behaviour, but it certainly does make you wonder what anyone else would have done in that situation.

His actions in Rise of Skywalker are in character with his abusive childhood. He never got to prove to himself to his father and so Hux could never move on. There would always be a goal he would have to beat, a never-ending unobtainable prize and this time it meant beating Kylo Ren no matter what it took. If he hadn’t been executed for treason Hux would have died some other way, and perhaps, he took the risk because he needed it to end. The influence he had achieved in the First Order had been deliberately undermined by Kylo Ren creating the Supreme Council upon his accession to Supreme Leader, leaving Hux with less power and to answer to a superior. He had nothing left to lose.

Tarkin will forever be one of the most frightening people in the Star Wars universe to me. People often cite Darth Vader as being the villain, however, the cold and calculating Willhuff Tarkin who ordered the destruction of Alderaan is worse to me. That horrifying moment in A New Hope when you realise that he actually means to destroy an entire planet for no reason other than sheer cruelty will forever be etched in my memory.

He isn’t just your basic psychopath though. In The Clone Wars, he discusses the Jedi’s role in the war with Anakin Skywalker showing an intelligence that has thought past a basic need to just cause pain. Throughout the episode (3.19), he displays an aptitude for manipulation using words as a weapon. At the end of the mission, he makes a point of praising Anakin, while subtly insulting the less military-minded Obi-Wan.

Like the Emperor, he seeks order in the Galaxy and is willing to go to any lengths to get it. At one point he came to owe Darth Vader a debt, and as repayment, the Sith asked Tarkin to challenge him to a hunt (Darth Vader comics). Most people would be terrified of such an idea, or at least take it easy in case Vader should take insult. Instead, Tarkin seems to actually relish the challenge and gives it his all, almost besting Vader. After tricking Tarkin into getting close to him, Vader proves the dark side’s superiority and then releases a relieved Tarkin. But Tarkin isn’t relieved that he’s alive. Nope. He’s just glad that Vader is on their side. I think that says it all.

Definitely one for the irritating list, Krennic reminds me of Tarkin yet completely lacks any actual skill to be as bad as he wants to be. While Tarkin has the brains and sharp mind to back up his ambitions, Krennic is a scientist who essentially uses the work of others to further his own agenda. He may have started out as someone who had a gift of his own, but then he realised it was easier just to utilise and bully others. He wants what he can’t have, and he’ll do anything to get it. The problem is what he wants is power and influence, whereas other people on this list have loftier goals. While they may be utterly ruthless in getting there, they have something bigger than themselves in mind. Krennic doesn’t have that and that becomes blatantly obvious when he’s foolish enough to press Darth Vader for a personal audience with the Emperor in Rogue One, only to find himself at the end of a force choke.

While I am behind in the new canon for Thrawn, what I’ve seen in Star Wars Rebels so far seems to correlate to the character I know from the Expanded Universe. A calculating strategical genius, Thrawn has a true love and appreciation for cultures which he uses to analyse his opponents. He is always one step ahead of everyone which makes him a truly formidable opponent and unlike many people in the Empire he doesn’t give in to his emotions. He watches from afar, takes note and lets people destroy themselves through their own actions.

Not much is known about his species, the Chiss, which adds to the mystery surrounding him. He is also one of the few aliens in the Empire, and even fewer to reach a high rank. It’s really interesting to see him in Rebels when the Empire was at the height of its power, whereas in The Thrawn trilogy he was the dominant power player.

I look forward to catching up with Rebels and the new Thrawn novels to learn more about his story.

The only woman on the list, Nyna Calixte had some tough competition to beat. Both Ysanne Isard and Natasi Daala were close behind her. The problem with the Empire and the First Order (I haven’t forgotten Phasma, don’t worry 😉 ) is that women don’t get very far and so there are very few decent characters to pick from. I absolutely cannot stand Arhinda Pryce in Star Wars Rebels; she’s such a weak character.

Nyna Calixte is fabulously intriguing and has a second identity that I’m purposely not naming as the reveal is a big part of The Legacy comics series. The series is set over a hundred years after the events of A New Hope and features the descendants of the Skywalker/Solo family. Calixte is a Grand Moff and Director of Imperial Intelligence. She has her hands in so many delicious pies, is running multiple schemes that you know about and many more that you don’t. Politically ambitious she is dangerous and calculating with the intelligence to make use of what she learns, making her one of the most dangerous players in the Galaxy.

Imperial characters are quite different from other characters, and this was a much darker and more psychological post compared to others in my Star Wars challenge so far. That’s the great things about a challenge like this, you never know what the prompts will pull out of you! Tomorrow is the mirror of this one; Rebellion!

What are your thoughts on the Empire? Do you prefer the Empire or the First Order? Do you like Imperial characters?

Image Credits: Rogue One Screencaps are from Star Wars Screencaps.