Seriously Geeky Sundays #43 – Around the World in 8 Sundays [Australia] 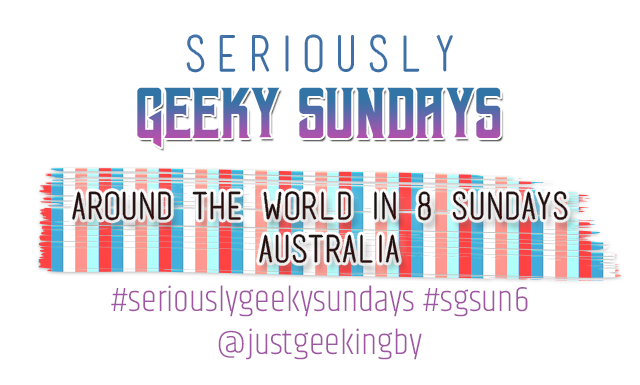 We’re back with another Around the World in 8 Sundays topic this week as Seriously Geeky Sundays heads to the continent of Australia. While researching for this week’s theme I found out something very interesting; New Zealand isn’t actually listed on any continent if you use the 7 continents scheme. It’s actually part of the submerged continent of Zealandia. SGS, however, is more interested in geeky things rather than being geographically accurate so I’ve included New Zealand in my answers. My fellow geeks and nerds, it’s entirely your choice if you wish to do the same, I just thought it was an interesting fact to share 😉

It’s also the third week of the month so you know what that means; next month’s themes and questions reveal! Head over to February’s questions to find out more!

What is your favourite fandom set in Australia?

Harrow starring Ioan Gruffudd came onto my radar pretty quickly because Gruffudd’s previous show Forever had just ended after one season, and I’d really enjoyed it. He had played a medical examiner/coroner in Forever, and he was playing a similar role in this new show. I’m a big fan of the actor anyway and have been since his Hornblower days.

He plays a completely different character in Harrow, and the show is so much darker, boasting a stellar cast of Australian actors. I was immeadiatly drawn in by the mystery in Season 1 and when that one was answered the writers just had an even bigger one ready for Season 2! Can’t wait to see what

Who is your favourite character from the continent of Australia?

Alexa Crowe from My Life is Murder played by Lucy Lawless. Lucy Lawless is fantastic as the main character, a former detective turned private investigator is handed unsolved crimes by someone she used to work with. As a result the cases are interesting, weird and sometimes downright confounding. Alexa herself is one of a kind, and dives right in to all sorts of situations no matter what the requirements.

Throw in her pet cat, who isn’t actually her cat and ends up making itself at home, who she talks to regularly, and you’ve got an awesome show with a really great protagonist. I thought that this show was a one season wonder, however, I’ve just found out that it was actually renewed for a second season 🙂

Do you have any favourite authors/entertainers/celebrities from this continent?

Two spring to mind; Marianne Curley and John Robertson. Marianne Curley is the author of one of my favourite books, Old Magic, a time-travelling fantasy novel and the brilliant Guardians of Time series about the agents of Order who protect history from the goddess of Chaos. John is a comedian and entertainer known for The Dark Room and is a great guy. I had the pleasure of interviewing him a few years ago and you can review the interview here!

Thinking of Australia’s diverse history which part would you like to see featured in a fandom?

I feel that the one part of Australia history that is given the most emphasis is actually the time celebrated by Australia Day itself, the settlement of the country when convicts were transferred to the land. I think I remember reading about a drama series starting this year/last year set in that very time period. In period dramas like this, the emphasis is taken away from country it’s set in and makes it more about the country that is doing the invading.

I’d love to see some fandoms set in the early 1900s such as the 1920s and 1930s, or even later after World War II. I feel as though this part of the world gets forgotten in period dramas and literature set in these periods. They’re always set in Western countries and despite Australia being huge it just seems to be forgotten about. Sometimes it feels like people forget that Australian actually existed between the 18th century and the 21st century.

Although there is a thriving Australian and New Zealand entertainment industry very few productions are picked up outside this continent. What are your thoughts on this?

I grew up watching several Australian shows. My mum watched Neighbours and Home & Away which I ended up watching too, and I also watched Going Round the Twist. Over the years there were a  few more Australia and New Zealand TV Shows here and there that caught my attention, although not as many as I would have liked. I actually had to rewrite these questions when I realised how few productions actually made it outside Australia and New Zealand which I think is a shame. The ones I’ve seen have been such great shows, filled with quirky characters and interesting storylines that I’ve not seen anywhere else.

You’ve been given a chance to set a scene for a fandom of your choice in Australia; do you pick the outback or an urban location?

It’s got to be the outback. While the cities of Australia have their own unique charms there is just something so unique and stunning about the Australian outback. It just feels like mother nature has been left unspoiled and nature is still truly wild.

Thanks for joining me for another Around the World in 8 Sundays post! We’ve only got two more left now!

Do you have a favourite fandom or character from this continent?