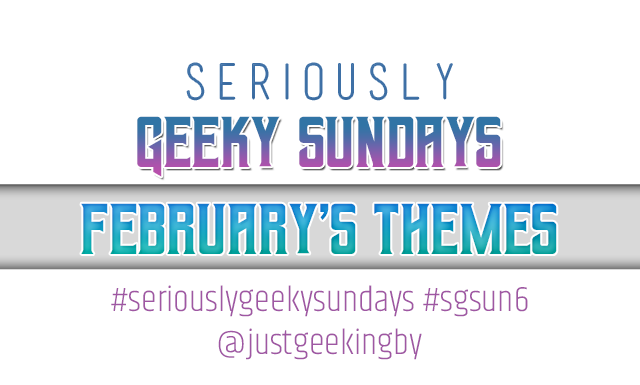 It’s the third week of the month and that means it’s time for Seriously Geeky Sundays February’s questions! This month starts out with a look at a topic that means a lot to me as a disabled woman and one I’ve taken great consideration in including in Seriously Geeky Sundays; representation in pop culture. For those who wish to avoid the valentines day chaos join us as we instead celebrate Chinese New Year by heading to Asia for this month’s Around the World in 8 Sundays theme. The rest of the month is filled with fictional engineering and virtual pets.

Taking place every Sunday there are six questions for bloggers to answer. You can pop over to the Seriously Geeky Sundays page for more information and see the themes for the next four months. You can take part every week or just pop in when a week catches your fancy. Every week I post my own answers and include link-up for you to pop your own link in so others can check them out your post too.

If you’re not able to take part on a Sunday then you’re welcome to post under the alternative title of ‘Seriously Geeky Series’ anytime during the week so you don’t miss out! Check out the new FAQ for more details.

Please Note – The word fandom is used in questions as shorthand for ‘book/TV show/movie/video game/etc.’ Please feel free to replacement ‘fandom’ with whatever term or media that works best for you.

Here are this month’s questions.

I thought long and hard about including this topic, so please know that these questions have been designed with the utmost respect by someone who understands the need for a respectful approach.

14th February – Around the World in 8 Sundays [Asia]

Everyone is going to be sick of lovey-dovey stuff today, so you’ll be glad to hear we’re skipping it as we head Around the World to Asia as February 12th was the Chinese New Year!

This week is Engineers Week, dedicated to the field of engineering and inspiring people to become involved in the field. We’re joining in the celebrations by dedicating this week to everything engineering in fictional worlds.

28th February – Gotta Catch them all!

Way back in 1996 in Japan, a brand new game called Pokemon was released and it took the world by storm. Every year on 27th February fans worldwide celebrate the original release and even if you’re not a Pokemon fan you can’t deny the effect that this game has had on pop culture. This week’s questions are aimed at looking at just that.

Don’t worry if you’re not a Pokemon fan or never played a game in your life because these questions can be answered with Pokemon in mind or any fandom!

What do you think of the Seriously Geeky Sundays February prompts? Let me know in the comments!