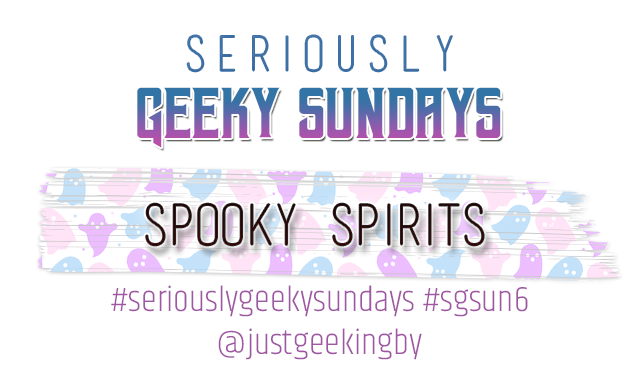 Happy Samhain everyone and a belated Happy Halloween! Today’s Seriously Geeky Sundays is all about celebrating everything spooky, dark and departed in the fandom world as we remember the fandoms no longer with us. We all have fandoms we wish hadn’t been cancelled; what if you had the power to resurrect them? Well for at least today you get that wish!

What is your favourite Halloween episode, event or film?

For me, it’s all about events in video games. I haven’t been able to actively get out and physically be involved with Halloween activities for many years now due to my disabilities, but in-game events in MMORPGs let me immerse myself fully in the Halloween experience. While I have a fondness for Guild Wars 2’s event, it’s World of Warcraft’s Hallow’s End that really captures my heart.

I love the way the entire game embraces Halloween for the period of the event. Everywhere you go there are decorations. Pumpkins dotted about, dark candles littered about and witches hats everywhere including on iconic statues which just looks epic. Then there’s the Headless Horseman himself who visits villages with his menacing voice and rhymes. As a Pagan, I also appreciate the Wickerman link to Samhain traditions. Sure there’s a grinding component to it, let’s face it, it is still a video game. However, the entire spirit of Hallow’s End is fantastic.

Who is your favourite fictional spirit?

He helps Dresden as an assistant and acts as a living encyclopedia of magic. Most of the time he’s either being a smart ass of bantering with Dresden, having picked up personality characteristics from Dresden himself.

What is your go-to for spooky fandom fun at this time of year?

This is going to sound like a shameless plug considering I literally reviewed them the other day, but honestly, I go to horror anthologies. I’m not a big horror scary story fan. I can’t read a full book about gore, ghosts or anything else spooky. However, small doses like short stories I lap up. I want bite-sized segments that just give me that spooky chill down my spine, maybe make me think a tiny bit but not too much. If there is one that gets under my skin, hey presto I’m on to the next one and whisked away into another world of characters and story!

I like urban fantasy and horror anthologies, but I also love Victorian horror too. They were the original pioneers of the macabre and there is nothing quite like an original Victorian gothic tale.

When I wrote this question I didn’t actually think about how I was going to answer this question. I had multiple characters that sprung to mind and narrowing them down was quite difficult! I’m going to go with Mercy Thompson from Patricia Brigg’s series of the same name. Mercy is a coyote shapeshifter raised by werewolves and someone who has never fitted in. So she carves her own life out for her, and she does it with style. When her new werewolf neighbour complains about something she gives it back to him with 100% attitude, knowing full well that it’s like waving a red flag at a bull.

She’s strong, passionate and loyal to those she cares about, and I love that she doesn’t take crap from people, no matter what shape or form they come in. She does what is right and takes the consequences because it’s better to do the right thing than shy away from them. Mercy’s not an all-powerful heroine though; she’s written and shown with vulnerabilities and weaknesses, just like a normal woman. Sure she can change into a coyote, but she’s still a woman. She still worries about things, she still has a business to run, and everyday life things happening on top of supernatural stuff.

If you could resurrect a fandom which would it be?

I have two because one technically isn’t a full fandom, it’s a timeline. I’d love to have the old Star Wars canon back or at the very least have them finish the Star Wars Legacy comic run with Ania Solo. It was in production when they very suddenly decided to stop the canon and reboot it, so Ania’s story is just hanging there forever unfinished.

As for an actual fandom, well, I have a list I made previously. Realistically though I’d pick Marvel’s Agent Carter from that list, especially after seeing Avengers: Endgame and knowing that Steve Rogers went back to live with Peggy. I really think there needs to be a continuation of the series or a new series (even just a one-off special) with the two of them. Really we just need more Peggy on our screen. They didn’t do her justice.

This is a no brainer; Mara Jade Skywalker. There’s been random talk and rumours about her turning up in the new canon, especially as Thrawn has turned up (he was created by the same author). She has topped fans lists of top characters for decades so she would be a big hit. If the old canon still existed she would have appeared as a force ghost without question (she already has several times).

Taking part in this weeks Seriously Geeky Sundays prompt? Pop your link or your answers in the comments below. Be sure to check out some of the other participants too.

Thanks, everyone for reading this week’s spooky version of Seriously Geeky Sundays! I’m always happy to chat about supernatural and urban fantasy topics so this was a joy for me to write. If you’re ever curious about what I’m reading you can check out my currently reading page at any time.

Check back next week for what’s in a name, our first interactive theme!

What fandom related things did you do for Halloween this year?