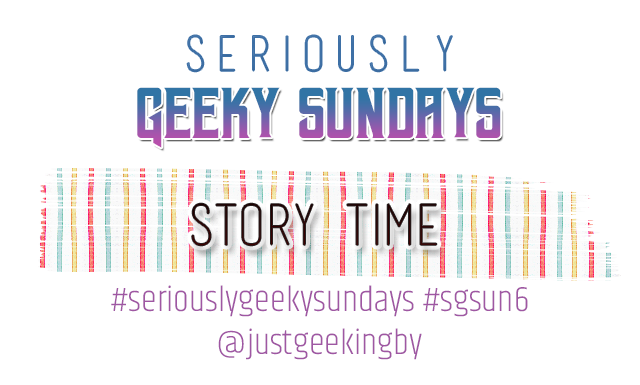 This week’s Seriously Geeky Sundays prompt is inspired by an author that is very near and dear to me. Roald Dahl is an author that was part of many British children’s childhoods, and for those in the 90s, also part of a horrific train safety campaign (you can see it here but I warn you it’s gruesome) which none of us will ever forget. Train safety aside, Roald Dahl’s mix of realism and fantastic elements in his books started me down the path to geekdom.

Today is known as Roald Dahl day, aka Story Day and seemed like just the time to talk about stories. Nostalgia is the undercurrent of this week’s questions as we talk about our first loves and move on to one of the most talked-about subjects in entertainment right now; reboots.

What was your favourite story/ies during your childhood?

I’ve talked a lot about my childhood interests in previous Seriously Geeky Sundays so I’m going even further back to when I was a little girl and my dad used to read with me. We would read Roald Dahl books such as James and the Giant Peach and George’s Marvellous Medicine. They both had a profound effect on me, bridging that gap between the fantastic and the ordinary and merging them into something new and exciting.

The latter also had a not so fun effect for my parents; at bath times I’d secretly start mixing my own ‘marvellous’ potions in a beaker. I thankfully was old enough to know better than to drink them. I just mixed them with the eagerness of a child who had their first taste of alchemy, wanting to see what happened when I mixed that shampoo with that bubble bath. I have no idea if they knew I was doing it if they did they never said anything!

Who was your favourite character/s as a child?

My parents had a selection of 70s British children’s tv shows on video so I grew up on the likes of Andie Pandie, Bill and Ben the Flower Pot Men, and the original The Muppets Show from the mid-70s. We still have those videos. They’re absolute classics. I fell in love with The Muppets and my love for them has not dimmed over the years, not even a tiny bit. When Disney revived the franchise I was a very happy woman.

Sorry, not sorry for this:

What is your favourite fairytale?

I talked a whole lot about my favourite fairytales during The Fairy Tale Tag so do check that out for more fairy tale love. My favourite fairytale is The Twelve Dancing Princesses. A king is mystified when his twelve daughters keep disappearing from their locked rooms every night and reappearing every morning having worn their shoes away from dancing away the night. He offers a reward, the choice of his daughters’ hand in marriage, to whoever can work out how they are escaping their locked rooms. The fairytale tells the story of one man who manages to unravels the mystery.

What are your thoughts on reimagined fairytales?

It really depends on whether they’re done well. I recently talked about world-building and how I love stories, however, it’s important to me that they are done well. There is nothing more disappointing than a story that is half-assed or a world that isn’t fully formed. That’s even more important when it comes to reimagined fairytales because I don’t want to just experience the same thing again and again. The entire point of a reimagined fairytale is that it’s taking something old and changing it.

I’ve watched more reimagined fairytales than I’ve read, although there is a huge amount of them on my TBR list; I’ve just not got to them yet. For me, it’s important that something new is brought to the tale, whether it’s bringing it into the 20th/21st century or involving the supernatural. What I don’t want to read is a Cinderella fairytale where the plot goes exactly the same as the original. After all, if it’s been modernised or transplanted to a new genre and the entire plot remains identical to the original fairytale can we even really call it a reimagination?

Some of my favourite reimagined fairytales include Grimm, 10th Kingdom and the Grimm Fairytale comics each of which have taken the original fairytales and added to them in a unique way.

How do you feel about remakes and reboots?

As you may have guessed from my previous answer I don’t instinctively dislike remakes and reboots. A new story within a fandom/franchise that I love is something to be celebrated – but again, there’s the caveat of if they do it right.

I have a prime example of doing it wrong; Ghostbusters. As someone who is pro-gender equality (I no longer go by feminist due to the radicalisation and over politicisation of the term, but that’s a longer story) I was all for an all-female cast. I’m for any castings of anything that promotes equality whether that’s all-female, LGBTQ+, disabled or POC castings. In short; we need more diversity.

Then I watched the movie… and hated it. The problem wasn’t an all-female cast. It was just a terrible movie that was badly written. It was trying too hard to be too many things rather than just letting loose and being a Ghostbusters movie with women in it. It didn’t need to be a statement because just by existing it was a statement. And the writers completely failed to understand that. The result was something completely cringeworthy that failed to prove the point that an all-female cast was awesome.

I think the important thing with remakes and reboots is going into them with an open mind and not expecting them to be the same. I tend to view them as alternative universes (AU), and I think the Arrowverse handled this concept really well in one of their crossovers. There’s a cameo with one of the DC cinematic universe characters and their Arrowverse (TV) counterparts which basically sets it up that the two are in separate universes. So I basically view any reboots/remakes as AU. They don’t have to exist together, and neither one takes away from the other. The new doesn’t affect my feelings for the old and vice versa.

What is your favourite story right now?

Right now Travelers is my favourite story right now. Without giving too much away it’s a science fiction tv show about people from the future who are sent back to the 21st Century to take over the lives of people who are just about to die. Their aim is to prevent catastropic events from happening that led to devastating problems in the future. As you can imagine this isn’t as simple as it sounds and there’s a fantastic cast of characters each with their own subplots.

As you might have guessed stories are something I’m quite passionate about, however, I fully support everyone having their own opinions when it comes to reboots and remakes.

What is your favourite reboot/remake?