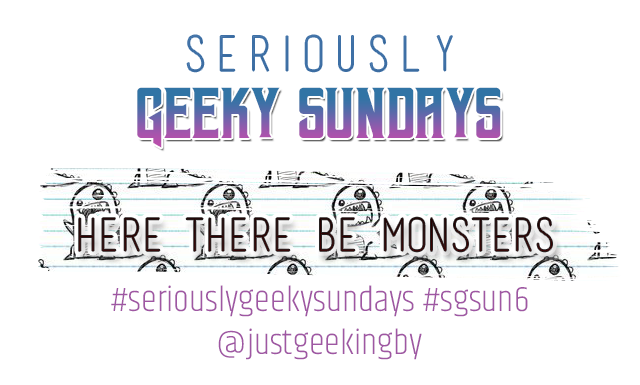 It’s the last week of August and here in the northern hemisphere, that means we’re saying goodbye to summer as we welcome autumn in. For Seriously Geeky Sundays that means brand new questions and themes! September’s questions are right here and if you missed the big theme reveal for the rest of year then go check them out 😉

On this day in 1797, Mary Shelley was born and 26 years later she would write the story of Frankenstein’s monster. One of the most well-known monsters of all time that particular monster continues to feature in stories and franchises today. My personal favourite is the DC Comics version, and he almost featured in this post. You’ll need to read on to find out which other DC character stole the spotlight instead as I take you on a ride through one of my favourite genres.

Here there be monsters

What was your first introduction to the horror genre?

Like all teens I watched my fair share of horror movies, such as I know what you did last summer and Jeepers Creepers. However, it was books that were my gateway drug to horror. I started with Point Horror and Point Horror Unleashed, and then I saw an article in the girls’ magazine Bliss about a series called The Night World by L.J.Smith. I can’t remember for sure if the first book, The Secret Vampire, was a freebie with the magazine or not. Either way, I was hooked; first on that series, then on all L.J.Smith’s books and then on the wider genre of Urban Fantasy – and that leads me neatly on to question two!

Horror comes in all flavours now; what sub-genres do you like/dislike?

Urban Fantasy can basically be summed up as supernatural elements in an urban setting during the 19th, 20th and/or 21st Century. Anything with witches, vampires, shapeshifters and so on living in modern times comes under this genre. It’s the main genre that I read and watch, and you can check out my favourite urban fantasy book series here!

I’m also a big Victorian gothic fan after studying it at University for my English Lit degree, and from that stemmed my interest in the Cthulhu Mythos‎. I’m into quite a few other horror sub-genres that it’s easier to say which ones I dislike. I’m not into gore, zombies, or survival horror, so most modern-day horror movies don’t interest me unless they have an apocalyptic element. I’m a sucker for apocalypse and theology based horror films such as Stigmata and End of Days.

Who is your favourite monster?

I wouldn’t personally categorise Swamp Thing as a monster, although technically he does fit the bill for this question. He’s the avatar of the Green, the elemental force connected to all plant life on earth, and charged with protecting the Earth from harm. He is a complex character and his story arcs are some of the most diverse and interesting in the DC universe. If you’ve not checked out any of the Swamp Thing comics, or any of the other Avatars such as Animal Man, I really suggest doing so as it’s a fantastic side of DC that gets overlooked a lot.

What is your favourite monstrous species?

It always comes back to vampires for me. Not Bram Stoker’s Dracula; I’ve never been a fan of that vampire myth. I love that there are so many variations of the myth and that each author brings their own unique view. That was what interested me about Twilight; Stephanie Meyer’s world-building. While the idea of shining vampires sounds so ridiculous it was a completely radical concept from a world-building perspective and I have to salute her for having the courage to go ahead with it.

Honestly, though, I’m fascinated by any new species I come across if they’re well created. While vampires top the list for me they’re not the only favourite of mine and that list would require a blog post of its own!

Monsters come in all forms including humans; who is your favourite human monster?

This contains major spoilers for the first season of Marvel’s Agents of SHIELD so if you’ve not watched it yet don’t click the spoiler box!

I don’t know about you guys but this was one of the biggest shocks in fandom ever for me. I know this happened so long ago but I feel this is something that everyone who watches the show needs to experience for themselves. It was that much of a shock. I didn’t see this one coming and every season since of SHIELD has been just one massive rollercoaster. I need to finish Season 6 and then watch the finale season. I’m not ashamed to say I’m avoiding it because after 6 seasons of shocks, tears and holy crap Batmans! I’m not sure I’m ready.

Anyway, back to the complete and utter monster that is Grant Ward. I just think of everything he did to people and how sick he was. Even thinking about it, remembering it all, it makes me feel sick. He is one of the most disturbing characters I think I’ve ever known and he was so good at playing the perfect agent, to lying when it suited him. It is actually admirable from a character point of view, and definitely an acting one. Brett Dalton excelled himself throughout his run as Grant.

What is your favourite horror/supernatural fandom?

There are so many book fandoms, most of which you can find on my reading page, that are some of my favourite horror/supernatural fandoms. For my favourite fandom though I’m going to pick the TV show Supernatural because it has personal ties for me. Before Chris and I had formerly started dating and were just starting to get to know one another the topic of Supernatural came up. I’d started to watch it while with my ex who had zero interest in it, and no one else I knew watched it. I was so excited to find someone else who knew what it was, watched it and loved it. Who also loved the unofficial soundtrack, Carry on my Wayward Son by Kansas, and knew what it meant.

Since then we’ve watched every season together. It’s become a slow and steady pace as health conditions have made it more complicated, but it’s the one show we never miss.

So it tops my list of favourites for that and because it’s bloody awesome! There are so many different opinions about the show, but for me, I’ve never been unhappy with it. I don’t feel that it’s lost anything over the years, and I still watch it with the same enthusiasm I did in the past.

I’m curious to know what you guys thought of the genre horror before this week’s prompt; did it surprise you to find some of the fandoms and characters I’ve talked about today come under the umbrella of horror?

Let me know your thoughts in the comments, and remember you can take part at any point during the week not just on Sundays! See the FAQ for more information 🙂