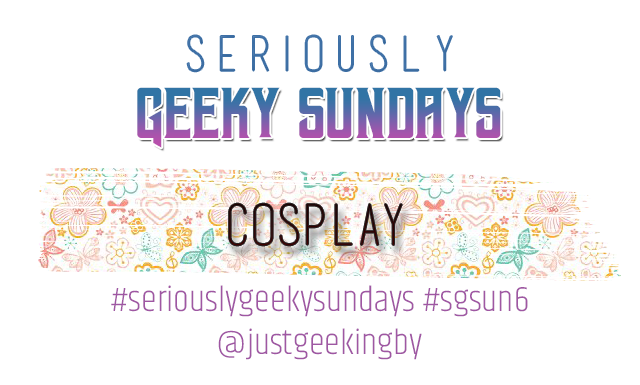 As promised last week the questions for September are now up! You can view them here and the themes for October have also been revealed. I’ve also revamped the Seriously Geeky Sundays section so please check it out and let me know what you think 🙂

Seriously Geeky Sundays is a weekly geeky prompt that started in April 2020. If you’re new then please head over to the SGS information page to find out more!

I’ve yet to cosplay but would like to! I while back I talked about 5 characters I’d like to dress up as for Halloween, and these are also on my cosplay wishlist. I’ve also sort of been planning an easily accessible/disability friendly Moonkin cosplay in my head for about a year now. Something easy to make and super comfortable to wear. I just need to wait until I have the funds to actually do it!

What does cosplay mean to you?

Cosplay is imagination come to life. It’s the world of fantasy brought forth into reality. It has this amazing ability to bring people together and it breaks down so many barriers. It’s a truly amazing thing because at conventions you can drum up the courage to talk to a cosplayer even if you’re super anxious, and you’ll end up talking to them for a good 5 or 10 minutes while normally you’d be terrified to talk to them.

Do you have a favourite cosplayer?

I’ve talked about my favourite cosplayers several times before and I as mentioned previously I only tend to follow people that I know or have met. That means I don’t tend to follow a lot of big-name cosplayers until I’ve actually met them in person at an event. I never actually spoke to Tabitha Lyons at the Sci-Fi Weekender we both attended; it was my first one and I was in full anxiety mode. I did attend one of the Artyfakes panels with her and her dad Nic Samiotis, and I was blown away by both their skill and how down to earth they both were.

I started following Tabby on twitter and eventually started to reply to her tweets. I admitted that I really wanted to approach her at SFW to meet her and get a photo, but was too scared! She told me I should have and I now have a standing ‘date’ with her to get one next time I see her at an event. I’ve been talking with her on and off ever since, and she is such a lovely person. What drew me to her was not just her beautiful and skillfully created cosplays, but also the fact that she engages with the community of her fans every step of the way. She’s not one of those cosplayers who is just in it for the money; this is something she loves, and the fans are important to her.

She also uses her platform to help people. Whether it’s being open about things and starting conversations, sharing things on her feeds or organising a calendar for a disability charity, Tabby is a genuine and caring person. I really urge you to check out her website or her social media channels, especially if you’re interested in some bigger cosplay builds. As part of Artyfakes with her dad, she regularly takes on big build challenges which are absolutely amazing and has her community vote for the next one.

What is the most unique cosplay you have ever seen?

At the convention we go to every year, SFW, unique cosplays are everywhere and I count myself extremely lucky to be able to say that. The creativity of these people is ridiculous and amazing. I wrote up a review of one year’s cosplay competition and that gives you an idea of just how out of this world the cosplays get.

The photo above is of a Gnarr from League of Legends cosplay by my friend Kim of Warp Raven Cosplay & Props. It is the most detailed cosplay I have ever seen in person.

Have you ever done a casual cosplay (aka everyday cosplay) or  Disney bounding?

I have not but I love the idea of casual cosplay especially as a disabled woman. It’s a much more accessible way to cosplay for me and it’s something I’m likely to try in the future.

Pick a group of characters from a fandom and tell us who they would cosplay as!

I’m going to pick the cast of MacGyver because the latest episode (4.04) dropped this epic gem of a scene:

That’s a legendary World of Warcraft meme based on something a player called Leeroy Jenkins did in-game. You may have heard about it somewhere on the internet even if you’ve never played WoW, if not you can read all about it here.

MacGyver – Mac would be Yoda from Star Wars as he always has all the answers.

Riley – Like many of the team Riley has expressed her love for Star Wars so I think that probably extends to other geeky things, especially retro cartoons and games. I can see her going for something a little silly like a onesie/giant bear/dinosaur-style cartoon character from her favourite childhood fandom.

Bozer – He’s a complete nerd, and loves fashion so I’m going to go with Lando Calrissian from Star Wars.

Matty – Matty is a strong, independent woman and loves to kick ass, so I think Wonder Woman for her.

Desi – Desi is the least likely of the team to be interested in cosplay, or at least that’s what I get from the limited information we have on her. She has yet to really open up to the rest of the team and what could have told us more happened off-screen between season 3 and 4. I think she’d end up going for a well-known pop culture warrior like Xena or Mulan and the weapons would most definitely not be fake; she’d be ready for anything, just in case.

Russ Taylor – The World of Warcraft player of the group I can see Russ cosplaying as Leeroy Jenkins or his own character.

Thanks for reading this week’s SGS and if you’re a cosplayer be sure to check out my ultimate gift guide for cosplayers! I’ve added this information to the new FAQ page of the Seriously Geeky Sundays information but wanted to repeat it here; if you’re not able to take part on a Sunday feel free to post on any day you wish under the title ‘Seriously Geeky Series’. Alternatively, if you don’t have a blog feel free to post your answers in the comments 🙂

Who is your favourite cosplayer?