Geeking By in December 2020 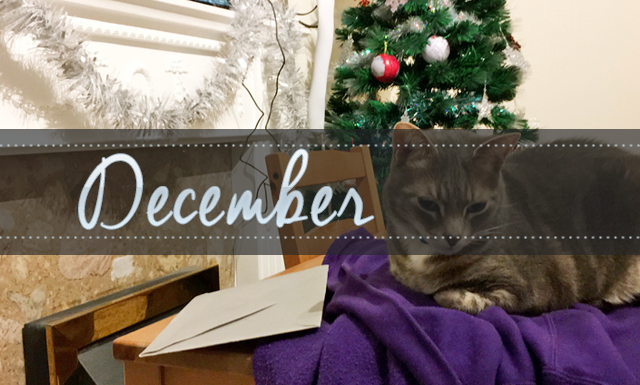 It feels like I was just writing one of these for October and November! December has just flown by, and here is the final monthly update of this wild year.

All throughout the month, I kept wondering if the festive feeling would kick in. If I’d feel like listening to Christmas music or popping on a Christmas film… and nope. Nothing, nada, zilch. I felt my normal excitement and anticipation for the annual gift-giving/hiding/teasing challenge Chris and I have every year, but that was it. Christmas could have just been another day for me this year. As we’ve been self-isolating since March we had one day with Chris’ mum, rather than the usual two days of celebration, and she was only over for a few hours. It just felt like a lot of build-up – and work on the day – for not much at all. It was kind of a relief when it was over.

That wasn’t anyone’s fault. My family did everything to make it a great time, I just wasn’t feeling it this year. I probably would have felt it more if we’d not received news a week or so before of the coronavirus mutating in South East England – where my parents live. I had to have a wonderfully horrible conversation which I’m sure plenty of other people have been faced with this year too.  I’ve been doing a decent job of keeping my mind off things most of the year, but that was a little bit too much for me. I didn’t spiral, however, when faced with that sort of reality the last thing on your mind is celebrating.

The month started with a sinus infection which went away with one dose of antibiotics which makes a change. Other than that the only physical issues (other than the normal) I’ve had to deal with have been wrist issues. My left wrist’s tendonitis has been playing up again, and I gave myself an RSI in my right thumb from working on something for hours (see the ‘Doing’ section below for more details’). My thumb is on the mend, flaring up every so often and just needs rest, while my wrist is probably going to keep flaring up from every now and then until the injury heals or I start doing exercises to strengthen it.

It’s been a pretty quiet month here at Just Geeky By due to recovering from the sinus infection and getting ready for the holidays. I wanted to get more done but chose to put my physical and mental health first.

We had a quiet month for Seriously Geeky Sundays due to the holidays, including a special one-off event for the holidays!

Not much to report on this front! My playthrough of Shadowlands content continued with me working my way through the Bastion Renown campaign on my druid and slowly levelling my mage.

December was the end of many seasons for the shows I’ve been watching over the last few months (FBI: Most Wanted S1, S.W.A.T S3,  FBI S2, Take Two S1, Prodigal Son S1 and NCIS: New Orleans S6). All of them with the exception of Take Two have been renewed for another season. I have so many shows on my Trakt.tv list waiting to restart now or listed as ‘check back next season!’ it’s frustrating!

It has given me a chance to catch up on shows I fell behind on and as I mentioned last month the DC Shows were first on my list. I’ve now finished Swamp Thing S1 and Batwoman S1, and at the very end of December, I started working on finishing Black Lightning S3.

I also finished Silent Witness S23 which I had stopped watching at the time due to an upcoming episode about domestic violence. I was in the middle of therapy working on my own feelings as an abuse survivor and wasn’t in a safe place to watch it back then. Now I was able to do so and finished the season, including the really startling final!!

It wasn’t the only show I caught up. I also finished;

New shows I watched were:

By the end of 2020, I’d managed to complete 7 of the 10 shows on my list of shows I’d hoped to finish by the end of the year. Technically I started in April, so I could give myself until April for a full 12 months. However, I’ve realised there’s not much point. The remaining three shows on the list (Defiance, Merlin, and Once Upon a Time) just aren’t grabbing my attention right now. There are so many other shows I want to watch and I’m working my way through my backlog pretty successfully without a list. I tried to force myself to watch Merlin and every time I just went ‘nope, don’t wanna!’. Maybe one day I will, maybe I won’t. It’s just a TV Show 🙂

I beat my GoodReads challenge 4 times in 2020. I started at 150, then 175, 200, 230 and then I beat the final total of 360! That wasn’t just a major accomplishment as far as numbers, it was a massive one for me personally. I spoke previously about how difficult it’s been for me to read after being diagnosed with ME, so being able to finally start hitting the number of books I was previously managing feels brilliant! The last time I managed anywhere near this amount was in 2017 when I hit 370. Even more important is that while there was still a lot of comics, there were a lot more novels in the mix this year too.

December’s contribution to the reading count was made primarily up of books, with a few comics at the end as I finished a few DC series off. They were:

Books I read in December were:

The first part of December was spent recovering from the infection and plotting, planning and buying Christmas presents. The second half was then all about getting everything ready for Christmas which for us was one day of celebration. I made sure to plan ahead and spread everything out so I didn’t end up with a mad rush right before the day to get everything done or tidied up. For once it actually worked, and while I was still absolutely knackered, I managed to divide everything into managable chunks.

We’ve been in self-imposed isolation since March, with only Chris’ mum having access to us and gradually as time went on even she has kept away from us to be on the safe side. On Christmas day she came over for the first time in months, although we all stuck to distancing and other health and safety stuff. Straight after Christmas Scotland went into tougher lockdown rules and she elected to not join us for New Years. So we made her up a little dinner that she picked up instead 🙂

As you can see I got a lot of lovely gifts for Christmas including books, games, stationery and makeup. Chris gave in and got me a coffee machine, so I can now have yummy coffees every day 😀 He also gave me a “book allowance” rather than buying me books because he saw my kindle book wish list (it’s synced to another website) and said that I could get more books with that than if he bought me them in paperback. He also knows how much I treasure the thought of being able to buy books, so he made me a happy little bookworm 😀

For one of Chris’ gifts, I decided I wanted to be a bit more creative this year. I’ve been wanting to draw him something for a while, but due to being ill and the entire year just generally being a mess, a character drawing wasn’t going to happen. So I thought I’d design his Christmas card instead! I looked up a tutorial for a festive design of his favourite pokemon, found this one, and went with it.

I pulled out my drawing tablet which I’ve never really used because when I originally got it I had an old graphics program (Paint Shop Pro 7) that didn’t work well with it. It threw my confidence completely, as have my other attempts at drawing in recent years. I figured I might as well try it. I ended up really getting into it, really enjoying it… and that’s how I gave myself an RSI… LOL./facepalm

Yup. I spent like 4/5 hours finishing it off after he caught me working on it. I’d been purposely working on it when he wasn’t around, like late at night and it was fine until my card finally arrived in the post. I realised that soon he’d give me my card, and so I had to take a chance and work on it. He walked in to ask me to do something for me and I was like… Ummm, yeah, hold on….surprise stuff….!!!! *shuffle, hide, shuffle*

In the end, I was surprised at the result and I’m really proud of it. The only problem was that we’ve been having issues with our printer. I (stupidly) assumed it was just the cartridges and didn’t check to see if the new ones worked. Went to do a trial print… and it didn’t work. Noooooo. Thankfully I had already planned to do plan B; a wallpaper. So instead of a card, he got a desktop wallpaper for his PC and a massive apology.

I’m going to take it as a compliment that he didn’t realise I’d drawn it at first 🙂 (I forgot to sign it /facepalm). Anyway, here is the finished piece:

I hope you all had a lovely holiday period and New Year! As with the rest of 2020 it wasn’t the one any of us wanted, but I hope you all managed to make it work for you and had a good time 🙂

How was your December 2020? Did you get any nice gifts?