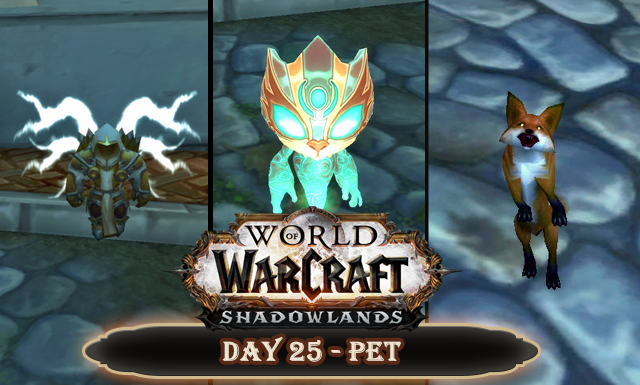 Hello everyone and welcome to day 25 of my 30 Day World of Warcraft Challenge that is counting down the days to the release of Shadowlands! Every day in November I will be posting about World of Warcraft based on the prompt list below. Today’s prompt is ‘pet ‘ and I’m going to tell you about three World of Warcraft pets that mean something special to me.

Remember that week of World of Warcraft posts I did previously? Yep, you guessed it, pets was one of them. So since I’ve already covered my favourite battle pets and I have my pet battle starters guide I thought I’d share some pets that mean something special to me. These three have memories attached, unique situations and in one case I’m just really proud of an achievement. Read on to find out more 🙂

Tyrael is included on my list of favourite pets and I’m talking about him here today for the same reason. He is an exclusive pet given to people who attended a one time only event held in Paris; the 2008 Blizzard World Wide Invitational. It was the last Blizzard WWI and the only one ever held in Europe, essentially giving us our very own Blizz Con for one time.

I’d only been with my fiance Chris for a year and a half when we went to it, but it still remains one of my favourite memories. It was made even more special by a completely chance meeting with then Blizzard CEO Mike Morhaime. He came and sat down next to us, taking a break, and had a little chat with us, asking how we were doing, whether were having a good time etc. We ended up interupted by a group of fans wanting his autograph. I regret not getting one myself, but it also felt disrespectful to ask him since he had sat down to get some peace for a few minutes and didn’t have to do that by talking to us. He’s gotten some flack over the years, so I will say this; most CCEOs wouldn’t even be walking the floor let alone talking to players. He is a really nice guy.

So every time I see someone with Mini Tyrael (item) I’m reminded of all the memories from that event. If I see someone with this pet I know they are part of an exclusive club of people who were (most likely) there that weekend. They were one of the people in the crowd, walking around the exhibition hall, and it’s just a nice feeling of community.

Another pet that reminds me of community is this one, the Jadefire Spirit, although for an entirely different reason. In 2018 I decided to grind out the ‘Going to Need a Bigger Bag’ achievement from the Timeless Isle on my dwarf hunter Arasse. It took me weeks of farming the same rares over and over, and one of the ones that took the longest was the Spirit of Jadefire. It dropped two items I needed, item and item.

I encountered various other players while during my farming, some nice and some not so nice. One that stuck out was a female Tauren who was farming this rare. We started interacting and helping each other get the tag, making sure if one of us was AFK the other one go to it before we killed it and so on. Most players didn’t care about other people, especially if they were the opposite faction. I started to actually look forward to my time sitting and waiting for this one to spawn because of that Tauren. A little kindness goes a long way and everytime I use this pet I remember my Tauren friend and smile 🙂

I said there would be good and bad memories and I can hear my fellow hardcore pet collectors groaning at the thought of this one 😛 I love foxes and I’m a completionist so when I saw there was a red fox pet, item, I had to have it. Of course it had absurdly low drop rate from one mob in one zone, scattered all over the place – and unless you got a portal from a mage it was only accessible if your faction won the battleground.

I don’t know how long it took me, but it was a very long time. I eventually got it.

Then two years later Blizzard decided that the drop rate really was too ridiculously low and decided to put it on the reputation vendor in the zone. You could do daily quest and save up 200 currency to buy it.

And yes, I am still annoyed about that.

However, I am also a little bit proud to have done it the hard way, even if there’s zero proof. I know that I did it. It was an annoyingly hard grind, but I got it in the end and it makes having it even more worth it.

Shadowlands brings with it lots of new pets, and some of them are absolutely adorable! I can’t wait to adopt them all 😀 Thanks for reading all about these special pets, I’m sure some of the new ones will find their own special place along side them too 😉

How about you; do you have a favourite pet?

My challenge continues tomorrow with another post about collections. This time it’s mounts! Want to know what mounts are at the top of my wish list? Come by tomorrow to find out.