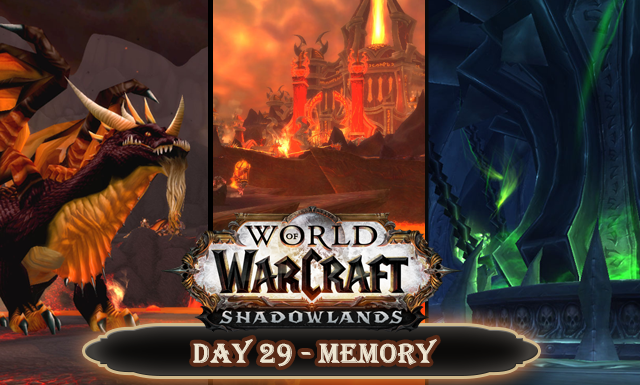 Hello everyone and welcome to day 29 of my 30 Day World of Warcraft Challenge that is counting down the days to the release of Shadowlands! Every day in November I will be posting about World of Warcraft based on the prompt list below. Today’s prompt is ‘memory’ and I’m sharing my favourite World of Warcraft raiding memories with you.

For the topic of ‘instance’, I briefly talked about raid memories when I talked about raid bosses I would never forget. For today’s prompt, I’m going deeper down that rabbit hole to talk about my fondest World of Warcraft raiding memories. I started raiding way back in Vanilla and was forced to stop in Legion when I started to get symptoms for ME. ME is a neurological condition which has had a massive impact on my life and in short, has changed a lot, including how I play video games. I can no longer focus enough to raid with my guild and can just about manage one wing of raid finder before it becomes too much.

But before all that happened I’d spent many years raiding, and as anyone who’s ever raided will tell you there are good and bad times. The good times are the ones that make up for the stressful moments, and thanks to my guild Excited State on Aerie Peak, there’s been some absolute golden ones 😀

I mentioned healing a bear tank when I was talking about Alysrazor and I healed that bear tank a lot back in my healing days. His name is Draconas and he’s the guild master of my current guild. The raid tactic for three drakes with Sartharion in Obsidian Sanctum required one tank to pull Sartharion over to a far corner and tank him while the rest of the raid killed the other drakes. One healer needed to focus on that tank due to the massive damage they took. It required the tank and healer to work together, rotating their cooldowns to cover one of the dragon’s abilities.

As the discipline priest in the guild at the time I was the healer with a cooldown, pain suppression, suitable for this healing duty. So every fight we’d wander off to our little corner while the rest of the fight went on until suddenly everyone would appear and kill the dragon 😀 We had done a similar thing in Black Temple on Illidari Council, so we were old hands at it by the time Obsidian Sanctum rolled around!

Another of my favourite raiding memories also features Draconas, although I’m sure he doesn’t remember this as fondly as I do 😛 In fact, I remember he started to get rather annoyed with us which is fair because we probably cost him quite a lot in repairs. In fairness, this wasn’t my idea; I was led astray by another priest in my guild.

One night in Firelands when we were waiting to start I got a whisper from Glonk, my fellow priest. He asked me to come over to him, and curious I did. He then showed me why; he was using the priest ability leap of faith to pull Draconas, who was AFK eating dinner, across the ground… towards a pool of lava.

So Draconas would return from AFK to find himself in a pool of lava, usually dead. When the item was introduced you can bet he was first in line to grab them, using them in every raid.

It wasn’t the torturing of our guild master ( Sorry Draconas!) that makes this one of my fondest memories. It’s was the camaraderie between myself and my fellow priests (yes, Glonk passed it on to other priests in our guild too).

I almost forgot this one, and I can’t believe I did because it’s the funniest story I always retell. We were doing Icecrown Citadel in Wrath of the Lich King one of the raiders was a mage named Cuggles. Cuggles was a British guy who had gone for a cup of tea. He had left his character sitting in the corridor before Professor Putricide, the one that connects to Festergut and Rotface’s rooms, while the rest of the raid cleared to one of them.

He was only gone for a few minutes, and then suddenly we hear this almightly screech/scream on voice chat.

Someone had triggered the geist trap and they had gone straight for Cuggles, who had just come back to his keyboard only to find a group of geists descending on him 😀 I think the scream was because he spilt tea all over himself /facepalm (he was fine, not hurt – apart from his pride :D).

It is still one of the funniest things I have ever had happen during a raid.

And then there was one… tomorrow is the final day of my 30 day World of Warcraft challenge and as voted by my readers on Twitter it’s Shadowlands glow-up reveal time! Yey!! I’ve purposely been keeping myself from giving anything away and only been sharing one character in screencaps. I’m so excited (and relieved) to be able to FINALLY share these with you!

How about you; what is your favourite raiding memory?