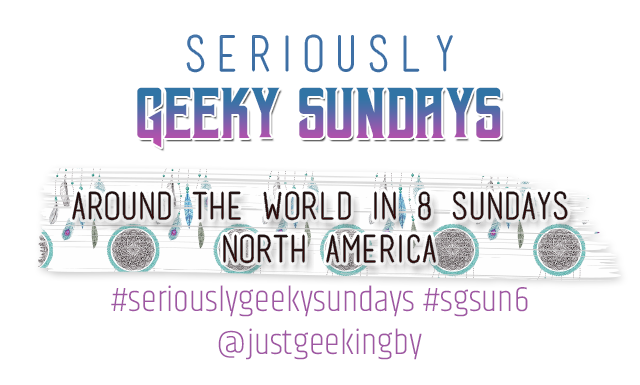 I was going to start this post with the words ‘I can’t believe it’s the end of November’ and it occurred to me that I’ve started a lot of these posts out talking about my disbelief. This year has been hard, and SGS has helped the time pass by that bit easier and faster. Next month I start writing prompts for the second year of Seriously Geeky Sundays, how amazing is that?!

Anyway, back to this year, and we’ve reached the Around the World in 8 Sundays post of this month. To coincide with the US Thanksgiving (the Canadian one is at the start of October) we’re looking at fandoms set in North America, which includes the USA, Canada, Central America and the Caribbean (which I didn’t know was actually part of North America until now!).

Who is your favourite Northern American character?

There are so many and I auto reached for a DC/Arrowverse character before making myself find another. I do watch/read other things, I swear! 😀 Case in point, the lovely Bo Dennis from Lost Girl. I’ve talked about Lost Girl a few times here and there, and I’m about to catch up with the final season so it seemed fitting to highlight her. At the start of the show, she’s lost, confused and alone, in hiding because she has no idea who or what she is. It’s great watching her blossom as a person over the course of the show as she grows into her powers and herself.

Despite being lost at the start of the show, Bo always knew her own mind. She was never a weak-willed character and as she found herself in a world that wanted to make her pick a side she fought it time and time again. She’s a badass fighter, a loving heart and adorably awkward as well.

What is your favourite film set in North America?

I was surprised by how much I had to think about this one. It turns out that most of my favourite films are set in fantasy words or far off planets, not North America! Then as soon as I thought of one I ended up thinking of too many /facepalm

I’m going to go with the first one that popped into my head which is RED and RED 2. Two awesome films with a great cast of veteran actors, including Bruce Willis who I grew up watching. The first film involves a bit of travelling around the US which also fits nicely with this week’s theme.

North American history features frequently in pop culture, which part do you feel is overdone and which do you wish was covered more?

The American Revolution is overdone. Sorry, but it is. We get that it’s a major part of your history but it’s the same thing every single time. Time travel shows such as Timeless make a point of showing more specific parts that were important, but generally, it’s just the same parts of the war over and over again.

As for covered more; the history before the puritans arrived. The land had an entire history before white people settled there and the heritage of N+ative Americans has been completely erased.

What I wish was covered more accurately was the role Americans had in World War II. They sat out of the War until the tragedy of Pearl Harbour but if you look at any media version they’re seen as the big heroes of it. There were thousands of people dying across Europe while the American president sat on his ass.

I realised while I was writing this answer that everything I said was based on US history. That’s a massive issue in itself. How much non-US history actually features in pop culture? I only know some Hawaiian history and culture from watching Hawaii Five-0 and Magnum PI, but again, that’s a US state. I watch a lot of Canadian shows and other than a bit about the Inuit in Due South, I can’t think of any other North American history.

North America tends to be seen as mainly just the US and Canada, which other countries do you recognise in fandoms?

The only one I can think of that is set completely in another country in Northern America is Death in Paradise which is a crime drama set on the fictional Caribbean island of Saint Marie. Other TV shows and movies will visit countries such as Cuba, Mexico, Jamaica etc. but I can’t think of any that use those countries as their primary setting.

Although Hollywood is at the center of the entertainmen industry, the Canadian entertainment industry is blooming. What is your favourite Canadian production?

As I mentioned I watch quite a few Canadian shows and I love them. I find their humour and style much more akin to British shows than American. My current favourite is Private Eyes starring Jason Priestley and Cindy Sampson. Priestley plays a former Hockey player who starts working with private investigator Sampson. That’s the very basic storyline, and there’s a lot more to it. The characters are diverse, fully-formed and quirky. There’s crime, mystery, and humour in equal measures. If you like shows with a good dollop of sarcasm then this is one for you.

Broadway musicals are a national treasure in the US; do you like musicals?

I’m not a huge musical fan. I tend to like the ones I like, rather than seeking them out and loving them all. I can enjoy a musical and appreciate it, but I can also find them incredibly dull if they don’t catch my attention.

I hope you enjoyed reading the answers to this month’s Around the world in 8 Sundays post. I’ll see you next week for more Seriously Geeky Sundays fun!

What is your favourite North American based fandom?