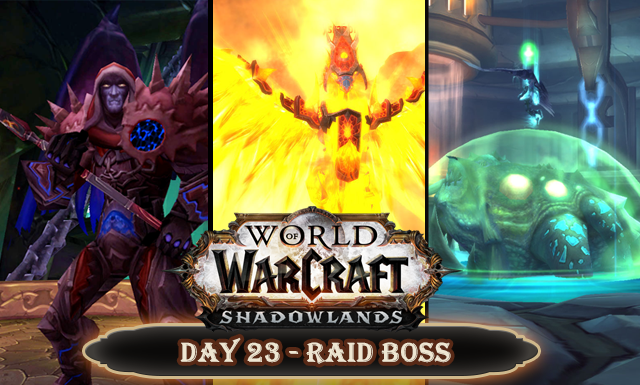 Hello everyone and welcome to day 23 of my 30 Day World of Warcraft Challenge that is counting down the days to the release of Shadowlands! Every day in November I will be posting about World of Warcraft based on the prompt list below. Today’s prompt is ‘raid boss’ and I’m talking about raid bosses I will never forget.

I started raiding in Vanilla as a very new gamer and I remember the first time I joined a 40 man raid to kill a boss. I had absolutely no idea what I was doing. As time went on I got more experienced, I changed, my main changed and the years passed by. I’ve experienced  many raid bosses as current content. I’ve cursed at them, I’ve told them to ‘just bloody die already!’ and I’ve felt that amazing feeling when you finally triumph over the sodding thing after weeks of wiping on it. Today I’m sharing with you three raid bosses who I will never forget for various different reasons, some highs and some lows.

This bastard is most definetely one of the lows! I could not get on with the ghost mechanics of this fight and spent every single one of these fights praying that I didn’t get picked for it. I even did my best to sit out for this fight as much as possible, that’s how much I despised it. When I did end up getting the ghost debuff I had to get my fiance Chris to take over, which was rather awkward when we were both in the same raid! Thankfully he was a healer at the time and playing a priest too so I could just swap to his character. One time “I” (in otherwords Chris) did a really good job and one of my guildmates commended me. I had to confess that it wasn’t actually me!

There have been many bosses over the years that I remember wiping on for a long long time, to the point that victory seemed so far away. One that I remember feeling really sweet was finally defeating the final boss in Ulduar; Yogg Saron. Ulduar is one of my favourite raids and it’s also a long one, so it had been a long road to get to Yogg Saron and then it took a while to get the kill. It was a sweet victory.

This boss is filed under raid chaos and general fun times for me. It was another period in our lives when both Chris and I were healing. In this fight the raid splits at one point, with each of the tanks going to either side of the field. As we were sitting in the same room and could communicate easily we would be focusing on the tanks. The problem was that the tanks did a lot of running about, so we were constantly running back and forth, back and forth. What our guild never heard was us cursing the tanks and shouting at one another ‘where has that bloody bear gone now?!’ ‘I don’t know! Wait, I’ve got him, he’s over here!’. Then there was a mad dash for feathers in the middle of it all.

While it was frustrating and stressful at times, it was also hilarious and I think of it fondly. It was the good type of stress, the type that challenges you and keeps you on your toes. It definetely meant that Alysrazor became a boss I wouldn’t forget easily.

If you liked reading about some of my raiding memories then keep an eye out for day 29’s prompt memory where I’m going to be returning to the subject in more detail!

How about you; do you have a favourite raid boss?

Next up tomorrow’s prompt is about all those random minor NPCs that we interact with briefly and then never give another thought to… or do we? Find out what I mean tomorrow 😉