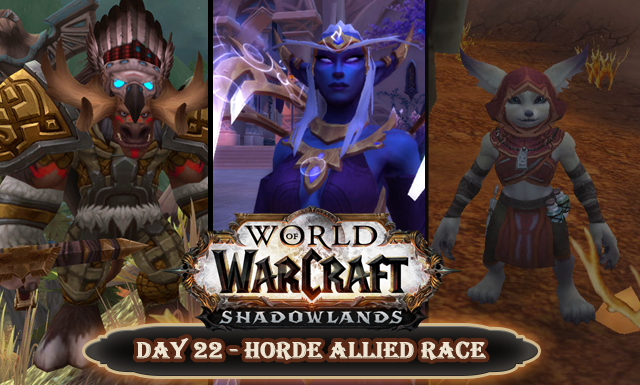 The final character post is here and I’m both sad and excited. I like talking about characters and lore, but I’m also looking forward to talking about some new things too! While working on this post I noticed that we, as players, have interacted with a lot more Horde allied race characters than we have Alliance ones. In Legion, both highmountain tauren and nightborne played a large part of the storyline, whereas lightforged draenei and void elves only appeared at the last part of the expansion. The latter barely at all.

It meant that I didn’t run into any of the issues I had yesterday with a lack of characters to choose from. Quite the opposite in fact, so let me share with you my favourite Horde allied race characters.

“Remember, most enemies forget… to look up!”

I already talked about my favourite highmountain tauren, Mayla, on day 8 and it’s another of the chieftains that comes in second place. Lasan won be over with his booming charisma, confidence and sense of humour. He shows an abundance of care for his people’s welfare, and his relationship with the War Eagles is beautiful to behold.

“Come down and face me, “Iron Wolf”. I’ll show you how a true wolf fights!”

I actually made a mistake when I talked about my favourite orcs on day 17. I included Aggra who is technically not an orc, she’s a mag’har orc. Whoops. My mistake did give me a chance to talk about another awesome female orc, who I mentioned in that post; Draka.

Things get a bit confusing with Draka because there are two versions of her; the normal timeline where she dies trying to protect her infant son Thrall, and the alternate timeline where those events never happen. The Draka of the alternate timeline is a life that never was, that never got the chance to become a warrior, to live her full potential. She is a strong character who stands side by side with her mate in both timelines, leaving him only to save their son.

“Fine! We can do it your way. But if this entire cave ends up exploding with arcane energy, it will be on your head.”

From the first moment we met Valtrois I loved her sassiness. When we first meet her she’s doing her own thing, looking for a way to fight against the demons inhabiting her home because she’s worked out a way to do something about it. That’s Valtrois all over. She knows she’s smarter than most people and she doesn’t need anyone’s permission to act on it. Once she gets to know people the attitude starts to mellow a bit, but she never quite loses the fierceness that makes her who she is.

“Kiro! I’m so happy you’re back! Was it scary out there? How’d you get one of their krolusks? Did you name it? Can I name it? Is it nice?”

Normally perky characters annoy me, yet Meera seems to just stop short of getting into that zone for me. Instead, I find her quite endearing especially as she’s a really caring individual who is putting herself in danger to help others. She knows she’s not a fighter like Nisha or Kiro, but she recognises what they’re doing is important and wants to be a part of it. I don’t think she quite realises just how important she is as well, and one of the Zandalari trolls emphasises to her that without her help they wouldn’t have been able to find their friends.

She is completely in love with her llamas, even singing to them on caravan journies – but let’s be fair, who doesn’t love those adorable little faces? Meera is just a happy lass who has seen the dark side of the world and keeps on singing because she’s also seen the good in it too.

“They seek to kill us. They seek to break us. All they have done is unite us in what will be the greatest hunt the Zandalari have ever known.”

It was so hard to pick between Loti and Hexlord Raal and then I found out they were married! I have no idea how I missed that part! I love their relationship, it’s brilliant. As a druid player since Vanilla I love the way druids are such an integral part of Zandalari society and their military, it is such a stark difference to the Cenarion Circle. Watching Loti shapeshift into bear form and go at the bad guys was wonderful to see.

I liked that she was a straight speaking character who spoke her mind but still had a sense of humour. Loti is tough on those she sees as the enemy and extremely loyal to those she feels duty-bound to.

Thanks for joining me for the second allied race post and the last character post of this prompt. From here on out the prompts start to get a bit random and look at various other aspects of the game. If you want to take a peek ahead you can see the full list here.

How about you; who is your favourite Horde allied race character?

Next up tomorrow is raid boss and I’m going to be taking a trip down memory lane for this one. Join me tomorrow to find out more 🙂