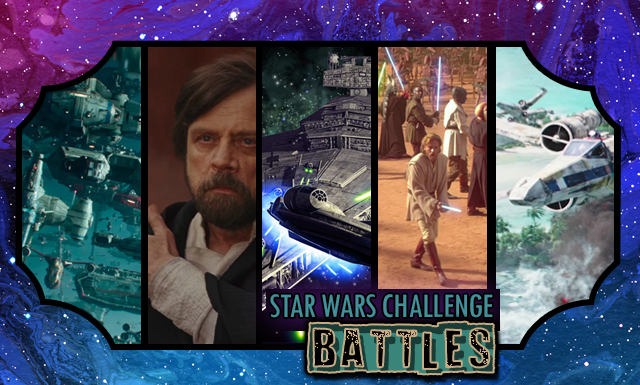 Hello and welcome to day twenty-five of my Star Wars challenge! For the next 31 days, I’ll be posting once a day with a Star Wars themed post. Some days I’ll be talking about just one thing, other days it’ll be about 5 things based on the prompt of the day.

The battle of good versus evil is at the heart of the entire Star Wars universe and as a result we get to witness some of the greatest battles in science fiction. What I love about battles in Star Wars is how multi-dimensional they are; while a battle wages on in space there are people on the ground and a lightsaber duel happening all at the same time. The magic of George Lucas and other directors has always been to merge all the scenes together to make it feel like you’re right there alongside the heroes as they fight for freedom against the forces of darkness.

There are so many amazing battles, and today I want to share with you my 5 Favourite Star Wars Battles:

The Battle of Geonosis

What caught my attention about the Battle of Geonosis in Attack of the Clones was that it was the first time we saw the Jedi together as a fighting force. Throughout the Clone Wars Tv Show that would become a normal occurrence, however, until this moment it was something we’d only thought/heard about. It was a truly amazing sight to behold.

The Kessel Run Chase in Solo: A Star Wars Story led to Han Solo accidentally breaking the record for the fastest Kessel Run as he and his crew tried to outrun the Imperials. This movie got a lot of criticism and honestly, I have no idea why because this scene was absolutely epic. This is what space battles and manoeuvres are supposed to be like. Everything I’d ever read in the expanded universe novels was suddenly right there in live-action and it was amazing. Suddenly the Millennium Falcon was doing what she was born to do.

The Battle of Scarif in Rogue One is bittersweet, and probably one of the few examples of a space battle where the good guys won but the cost was far too high. The battle is absolutely incredible, taking place in the air and the sky as the Rebel forces try to bring down the shield and send up the plans of the Death Star. We’re forced to watch as one by one the Rogue One team is eliminated by the enemy, and the battle concludes with the destruction of the planet.

I almost didn’t put this one on here because I have many reservations about The Last Jedi. One thing I did love about The Last Jedi was Luke’s showdown with Kylo Ren as part of the Battle of Crait. That was finally the Luke I knew and loved. The sarcastic, mischievous Jedi Master who looked his opponents in the eye and said ‘Is that all you’ve got?’. He played Kylo so well, just as Master Jedi should do and in that moment he was my Luke Skywalker.

There were so many tears, shocks, shouts of joy and wow, just so many emotions for this one. The Battle of Exegol in Rise of Skywalker was the battle of all battles for me. Seeing all those ships turn up, noting characters such as Wedge Antilles, and then identifying all the voices of the different Jedi as Rey channelled them… honestly, I’m not sure how this could have been more epic (other than the storyline being totally different, i.e. expanded universe, I mean).

I felt my heartbreak and then soar a thousand times over and I don’t think I’ll ever get sick of watching this one.

There are a lot of epic battle scenes in the expanded universe, video games, Clone Wars and Star Wars Rebels, however, for me, the cinematic ones have the most impact. They stay with me longer, there’s a particular magic to them.

How about you; what is your favourite Star Wars battle?

Image Credits: Geonosis and Kessel Run Images are from Wookiepedia, All screencaps are from Star Wars Screencaps.