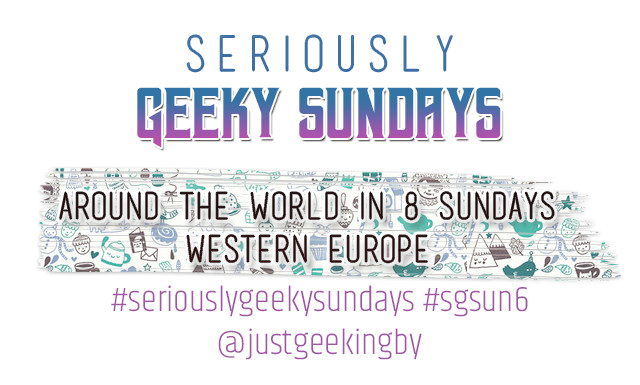 Hi everyone and welcome to week 26 of Seriously Geeky Sundays! It’s the first of our multi-week theme Around the World in 8 Sundays where we focus on fandoms and characters in a specific continent for that week’s prompts. As there are only 7 continents Europe has been divided into West and East, and Western Europe is where we start this week. It’s the place I call home so I’m really looking forward to hearing everyone’s thoughts this week!

I also want to offer my apologies for not being able to get around to comment on people’s posts as much as I used to. The last few months have been difficult, first with a wrist injury and now with some personal things happening. I still read them, I’m just struggling right now. I hope to be back interacting with you all soon <3

Who is your favourite British character?

As a brit myself there are a huge amount of contenders for this title, and the one that holds it is someone who I feel is not only worthy of what it means to be British but actually portrays Brits accurately in fandom. Too many times Brits end up being portrayed as posh, snobby, and a perfect Queen’s English accent. They always hail from England and it’s always the South, usually the South East, or London.

John Constantine is an exception to all of those stereotypes, save for being from England (he’s from North England). No one would ever accuse him of being stuck up or posh, and he says what he feels and does what he likes which personally I feel is a British quality which often gets overlooked. And let’s not forget the overabundance of sarcasm and cynicism. The Constantine comics have never shied away from saying it like it is and the most recent run has looked current politics in the eye and given it the Constantine name and shame treatment. The only thing I dislike about him is his smoking habit, but I also believe that no one is perfect so we can’t have everything, can we?

Who is your favourite character from the Western European mainland?

This was a surprisingly difficult question to answer! I was sure there were a few that I could name and if I was still feeling the love for the Anita Blake series then I would have multiple to pick from. Instead, I’ve ended up going for one that at first surprised me and then made perfect sense; D’Artagnan from The Three Musketeers.

I first fell in love with this character in the 1993 movie featuring Chris O’Donnell in the role of the young man who joins the three musketeers to save France. I then fell in love with the character all over again in 1998 when Gabriel Byrne played a much older D’Artagnan in The Man in the Iron Mask. I read the original The Three Musketeers by Alexandre Dumas the same year.

D’Artagnan is one of the first heroes I fell in love with. His story is set in a time before the French Revolution when France is at its peak, filled with luxury and romance. It’s a time of fantasy where anything can happen.

Who is your favourite Western European celebrity/author/entertainment professional?

I was going to answer with an author until I realised I couldn’t pick just one. Instead, I’m going with an actor and my favourite actor for a long time now has been Gerard Butler who hails from Scotland, and not too far from where I now live coincidently. He first came to my attention playing bad boy Terry Sheridan opposite Angelina Jolie in Tomb Raider: The Cradle Of Life. I’ll admit that the sexy accent and cheeky grin do play a part in the attraction but I also like his style as an actor and have followed his career ever since.

There are so many, but the first one that came to mind was Timeline. It’s a film about time travel starring Paul Walker, Frances O’Connor, Gerard Butler, Billy Connolly, David Thewlis, and Anna Friel. I love the actors and the story, however, it’s the way it connects European history to the present that made me think of instantly for this question.

There’s a part in the film where a European character is questioned by English because at that point in history they are at war with that particular country. The character, being from the future, is completely innocent of the allegations they are charged with, and I see it as a significant commentary on racism. In Timeline the literal disbelief the accuser would have expressed at being told they were time travellers is used as a metaphor. It doesn’t matter how innocent a person is, or how much evidence you have to prove someone’s innocence, it is automatically inadmissible in the eyes of a racist.

It’s moments like that which marks this movie out amongst my other favourites set in this region as well as making it enjoyable from a historical and fantasy perspective.

Western Europe is filled with history; which historical event, era or character to be featured in fandom has been your favourite?

I love most historical periods (world wars being the big exception) and as an Art History grad, I particularly enjoy films featuring European history as I recognise the visual elements. My favourite historical periods portrayed in fandoms are the Early modern period (1453 – 1789) and the Long nineteenth century (1789–1914). They’re a time of exploration, not just in terms of geography but also ideas and academics, with the nineteenth century giving birth to horror, science fiction and fantasy genres. They make the perfect setting for so many good stories. Plus the costumes from these periods are absolutely gorgeous.

Choose one of your favourite fandoms to go on a trip to Western Europe; where do they go? What do they get up to? Is it business, pleasure or not by choice at all?

I’ve been binge watching Veronia Mars and I’m now up to Season 4. It’s mentioned that Mac is in Istanbul (as a way of excusing the actress Tina Majorino who didn’t return with the rest of the cast in 2019). The gang are all grown up now with adult responsibilities and in some cases families, but they’re still the same old characters we know and love. I can totally see Veronica getting a panicked phone call from Mac needing her help which reuslts in her heading to Istanbul, and a wild road trip across Western Europe on the trail of some mystery or some bad guys.

And now I really want this to happen…

Thanks for reading this week’s Seriously Geeky Sundays and I hope you enjoyed the change of pace with this new type of prompt! Join me next week for the first October prompt as we talk about the topic of celebration!

Who is your favourite Western European character?

Don’t forget to share your links in the link-up or join in the fun in the comments! <3

Image Credits: John Constantine image is from DC Database, Man in the Iron Mask screencap is from Byrneholics Online, Tomb Raider screencap is from fan caps, Timeline still is from Remembering Paul Walker, Still from the Duchess is from Kiera Knightley Fans, Veronica Mars movie screencap is from Cap to it Gallery.