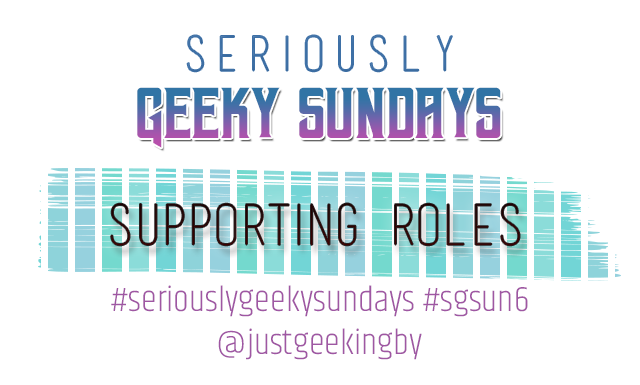 Hello everyone and welcome to the first Seriously Geeky Sundays week of August! In case you missed them August’s questions can be found here. There are a few things happening this month so please check out the announcements below!

Up until now, we’ve talked about all sorts of characters and this week we’re giving some love to the supporting roles in fandoms, the minor characters, the NPCs and the sidekicks. The smaller parts that are necessary for the whole thing to work. I always see prompts and tags talking about the main characters, the protagonists, the heroes, and the main cast, but no one ever seems to think about the smaller roles in fandoms. That is what inspired this week’s questions and I’m intrigued to see what answers you guys come up with!

August represents the final month of currently written questions which means I’ll be releasing new themes over the next few weeks. Keep an eye out for a suggestions and feedback post later this week where I’ll be asking for your input about theme ideas.

The second announcement is something I’ve been planning from the start of Seriously Geeky Sundays; hosting. Every so often other SGS participants will be offered the opportunity to host that week’s theme. What does that entail exactly? It’s really easy; you answer the prompt as normal and then invite people to comment leaving a link to their own post. In comparison, my own post will just be my answers without a link up as I won’t be hosting that week.

You’ll be able to see this in action next week as Megan of A Geeky Gal will be our first host! SGS wouldn’t have happened if it wasn’t for Megan helping me behind the scenes, talking me through my fears and helping to boost my confidence. Megan will be hosting week #19 Animation.

Once the new themes are up I’ll be looking for people to host upcoming weeks. The only requirement is that you must have participated in at least one SGS previously.

Who is your favourite sidekick?

When I think sidekicks I think of Disney sidekicks and I could probably list every single one for as my favourite. It’s The Lion King‘s Timon and Pumba that top the list though. There’s just something about that duo that always warms my heart.

Who is your favourite minor character or NPC?

Brann Bronzebeard from World of Warcraft is my favourite NPC. One of a trio of dwarven brothers, one of which is King, Brann is an explorer and like the infamous Indiana Jones (or Harrison Jones, his Azerothian counterpart) Brann gets up to all sorts of hijinks. He does it with a typical dwarven attitude and in Battle for Azeroth especially has some of the best one-liners. You always know when Brann’s around that something is going to go wrong but you can’t help but be curious and excited to find out what while you’re facepalming at the inevitability of it all.

Which minor character do you wish had more ‘screen’ time?

I’m pretty sure I’ve said this before somewhere, and quite possibly in a previous SGS, but I need more information about Rey’s parents. I really wish we knew more about them, how they got together, when Palpatine’s son realised who/what his father was and that he needed to protect his family, and so on. Did he ever find out that he was a clone? Even just knowing something as simple as that would be useful to know.

What is your favourite scene with a minor character?

There’s a scene in Tamora Pierce’s Protector of the Small series where Kel is talking with her mentor and Knight master, Raoul of Goldenlake and as usual, Raoul is his normal frank self. Kel is preparing to take her Ordeal of Knighthood in Squire and during one of their many conversations Raoul says this to her:

“When people say a knight’s job is all glory, I laugh and laugh and laugh. Often I can stop laughing before they edge away and talk about soothing drinks.”

What has been your favourite cameo role?

Most of my favourite cameos have been from Crisis on Infinite Earths, however, the best one for me was Will Wheaton’s one. It was just such a surprise to see him there at the start in such a random roll, and it was such a Will Wheaton thing to do that it made me laugh. It really set the whole thing for me because I was like, yep, this is going to be awesome.

If you could have someone play a cameo role in anything what would it be?

Following on from my last answer, I really love how previous actors who have played DC characters in older shows have popped up in Arrowverse shows. One that hasn’t happened yet is Chris O’Donnell who played Dick Grayson in the movies, Batman Forever and Batman and Robin. I’ve always been a big fan of Chris O’Donnell and I think he’d make a fantastic addition to the Arrowverse, although as he’s busy with NCIS: LA I suspect he’d only have time for a cameo.

It would also be great to see cameos from some of the other Smallville alum (the ones who aren’t in jail…) such as Michael Shanks who played Hawkman. He could pop up in Stargirl, for example, with a connection to the old Justice League of America.

Thanks for reading my answers for this week’s Seriously Geeky Sundays prompt and I hoped you enjoyed finding out who my favourite minor characters are!

Who is your favourite minor character?

Don’t forget that next week Seriously Geeky Sundays is heading over to A Geeky Gal!

Image Credits: Image of Rey's parents is from Star Wars Screencaps.com, Crisis on Infinite Earths screencap is from Genre Caps.