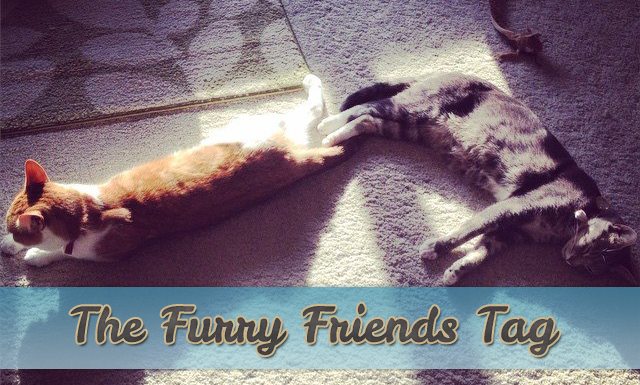 The Furry Friends tag came second place twice before it was finally crowned the winner of the penultimate Blog Tag Game poll. As I love animals and talking about my cats this one is going to be fun! 😀 I found the Furry Friends Tag on Youtube Society which has a great number of tags you can do on your blog or youtube channel if you’re ever stuck for post ideas!

There was a longer version with 30 questions of the Furry Friends Tag, however, all the tags I’ve been doing have been about this length so I picked the short version. If there was a question on the longer version you wanted me to answer feel free to ask me in the comments! As I have two pets I’ve also adapted the questions slightly to mirror that.

1. What are your pets name?

2. What kind of pet are they and what breed?

Both are cats, and Milo is a British shorthair silver tabby. George is a bit more of a mystery because while he appears to be an ordinary British shorthair red tabby (a ginger cat) he is super fluffy. He’s short-haired, but he has the fluff of a long-haired cat. We also witnessed some ragdoll-esque behaviour when he was a kitten and he is the most mild-mannered cat we have ever known. He has never attacked anyone, only ever clawing us by accident when scrabbling away and only “biting” us to nibble our fingers while cleaning them.

3. How long have you had your pet friends?

In both instances we got them from friends of the family who’s cat had given birth to kittens.

6. What is your favourite memory with your pets?

My favourite memory with Milo is when he was a kitten he did a few naughty things. One was stealing the feather duster and running down the stairs with it which you can see in the blurry photo above. He was moving so fast that was the best photo I could get. The other one was that he would sit at the top of the ladder leading into the loft. At the time we were living with Chris’ mum and gran and he would jump down at Chris’ gran from the top of the ladder. While he gave her a fright it was something she still laughed about years later.

As for George, honestly he’s such an adorable little goof ball he makes new memories that I cherish every day.

7. What are some quirky things about your pets’ personality?

I’ll start with George because it leads on from what I was just saying. George never fully developed mentally. He’s absolutely fine, fit and healthy otherwise and we checked with a vet who agreed that if he appears healthy there’s no reason stressing him out (he’s a high strung cat) with unnecessary tests. He’s just a very special cat. What it means is he’s a kitten in a mature cat’s body. While that sounds really cute and adorable – and it is sometimes – it can also cause a lot of problems when you’ve got another cat in the house. Poor Milo takes the brunt of it because George doesn’t understand any cat social cues.

He does a lot of goofy silly things and what normal cats learn in their first few years, such as water comes out of a tap, it’s taken him 2-3 times as long /facepalm. He also has this really weird habit of falling asleep on his head. We were pretty freaked out the first time he did it especially when we learned about head pressing which is a serious sign of several neurological disorders. But nope, it’s just George being George 😀 Now we just have to watch out for where he does it because he has a habit of doing it on top of their scratching post, and we’re worried one day he’s going to fall off.

In general, George does just like to sleep in the weirdest sleeping positions ever. As long as he has a steady base beneath him he’ll sleep anywhere in any way. There have been many head-shaking moments in our house where we’ve just gone ‘right, ok, not even going to ask’ 😀 I do share many of these on Twitter and Instagram so if you love kitty snaps and adventures give me a follow!

As for Milo; he’s a professional escape artist. He can get into any room, into anywhere and it’s so bad that he’s broken several door handles.  To thwart him we have had to swap some handles to doorknobs or turn the handles upside down so he can’t jump on them.

He has a patch of itchy skin on his tummy and when it was really bad we tried to get him to wear one of those all-over bodysuits, the ones you get when a pet has surgery and you want to prevent them getting to the stitches. He got out of it in less than 10 minutes. So we got safety pins. Again, he got out of it. We admitted defeat at that point and bought a cat-safe spray so that if he did lick it he didn’t make himself sick. So far so good.

He also likes to sleep with his toys. Shhh, he’ll totally deny it if you asked him 😉 I do have several photos catching him in the act, however:

8. What does your relationship with your pets mean to you?

I have a symbiotic relationship with my cats which is built on love and trust. I know that sounds wonderfully cliche, but it’s the best way I can describe it. I look after them and in turn they look after me. You’re probably thinking, wow, she’s so naive, they’re cats; they’re just after the food!

While Milo often is the asshole cat stereotype he’s also my emotional support kitty and that’s not a term I use lightly. He has this uncanny knack for knowing when I’m not feeling well, and especially when I’ve forgotten to take my meds. He’ll headbutt the medication box on my desk to bring it to my attention, reminding me that I’ve not taken them. It’s happened too many times to be a coincidence and it’s earned him the title ‘Nurse Milo’.

George came into our lives when I was a really dark place. I’d just left a job in a horrible way and had to have therapy to get back on my feet due to an emotionally abusive manager. George has been a light in my life ever since. He’s named after my grandad and he’s my little bundle of adorable fluff that always reminds me there’s some good in the world. He’s a happy little fellow who’s never unhappy.

9. What are some of your favourite past times with your pets?

This is a bit of an odd question when your pets are cats because anyone who has cats will know that cats sleep 80% of the day 😛 Cats tend to hang out with you rather than you hang out with them, especially Milo who is very much a do things on his terms type of cat.

There are lots of cuddles involved, and both boys like to be close to us so we have space on our desk where they can sleep. Milo’s favourite hobbies are getting into places he shouldn’t and causing general mischief and destruction. Play wise Milo is a string kitty; he loves old shoelaces and long dangling snake-style toys. He also likes my old hair bands, plastic bottle lids and the plastic covers you get on plugs when you buy new appliances.

George’s favourite hobbies are sunbathing and hunting down any boxes he can find. Compared to his brother he’s more a fan of mouses and balls, although will also play with anything that is shiny and moves. They’re both magpies so anything shiny, especially coins, get stolen if left lying about. He also sleeps with us in our bedroom and loves to cuddle up with me every night for some cuddles while I read before bedding down for the night.

10. What are nicknames do you call your pets?

Milo gets called everything under the sun usually with profanity involved because he is literally a little asshole. He does things just to be naughty and we know this for a fact because we’ve caught him doing it. It’s not attention-seeking or a need for anything, he is just a naughty little menace especially if he hasn’t got his own way. So his nicknames include; fuzzball, munchkin, pest, horror, monster, menace, dickhead.

And if you’re worried about me verbally abusing him; don’t be. He sits and defiantly purrs at me (with the occasional headbutt) as I call him these things 😛

George usually gets called Georgie or squeak/squeaks/squeaker because he’s never developed an adult cat meow. He still squeak-meows like a kitten and he does it constantly, so he’s also called a whiner too. He’s most definitely a chatterbox! He also gets called; McSqueaker, Ginger One, pumpkin, munchkin, doofus, dumbass, lambchop, horror, pest, numpty, fuzzball.

I was a bit late getting this one up due to some nasty fatigue so thank you all for your patience. I hope all the kitty spam in the Furry Friends Tag and that the cute photos were worth the wait 😉

Are you Team Milo or Team George? Don’t forget to join me on Twitter and Instagram for regular cat adventures and picture spam!