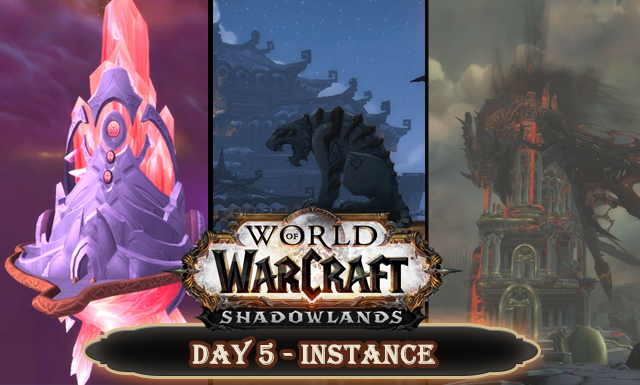 Hello everyone and welcome to day 5 of my 30 Day World of Warcraft Challenge that is counting down the days to the release of Shadowlands! Every day in November I will be posting about World of Warcraft based on the prompt list below. Today’s prompt is instance and I’m discussing the World of Warcraft instances that had an impact on the wider game universe and future expansions.

We’ve finally made it into the territory of topics that I haven’t talked about in my previous week dedicated to World of Warcraft! Rather than just list three of my favourite instances I’ve decided to talk about three World of Warcraft instances that I feel had a wider impact on the game universe and future expansions. Sure, there are the big raids like Icecrown Citadel, Firelands and most recently Ny’alotha where we champions saved the world (again) from the big bad/s. However, there are other ones where I feel important events and moments happened that had an impact on the universe we know and love. It’s those World of Warcraft instances I’m going to be talking about today.

The Arcatraz, a prison used by the naruu to hold the most dangerous creatures in existence, and who do we find there? Millhouse Manastorm.

Way back in The Burning Crusade we didn’t realise just how much trouble this little gnome was going to be. Him popping out of that cell was a little giggle, and now we have him popping up all over the place as people use item to turn into him. He’s also popped up in several expansions since his initial appearance, and he’s usually up to no good. In Cataclysm we find him working with the Twilight Hammer as a supplier. He then returned after his setback in Mists of Pandaria as a member of the Brawlers guild, and then he joins players in Warlords of Draenor as a follower, claiming to have changed. The last we see of him is in Legion when Mages stumble across him in their Order Hall Campaign and he joins them as a companion.

So, for good or bad, Millhouse always seems to surface with some sort of mischief up his sleeve. And just think, what if he hadn’t have popped out of that cell way back in TBC? 😉

End Time was one of three World of Warcraft dungeons introduced together in Cataclysm as part of the progression to the fight against Deathwing. Set in the Caverns of Time, players are led by Nozdormu, the leader of the Bronze Dragonflight, who first shows them what will happen if Deathwing is victorious. The bosses are random, and players may encounter three Echos of leaders of the Horde and Alliance. They are; Baine Bloodhoof, Jaina Proudmoore, Sylvanas Windrunner and Tyrande Whisperwind. The final boss is then Murozond, the fallen Nozdormu.

The impact of this particular World of Warcraft dungeon is two-fold, and I’m going to start by talking about Murozond. Nozdormu becomes his fallen self after being shown a vision of his death by the Titans, and then being manipulated by the Old Gods. These are the same entities that have already driven another Dragon Aspect to insanity (Deathwing) and indirectly, Malygos as well (Deathwing killed his entire flight). The Old Gods are a very real threat, and also by this expansion players have already seen two of them attempt to rise again (C’Thun and Yogg Saron).

Moving on to the Echos, each one reacts to Deathwing’s victory and the events that transpire in different ways. Baine is riddled with guilt and self-loathing as a result of failing to save his people, while his fellow horde leader Sylvanas having lost everything cannot find peace and aches to unleash her fury on the living. Tyrande is described as being “enveloped in a perpetual midnight” and sees nothing but death and sorrow.  In comparison, Jaina has been completely divided by her magic and the destruction of her staff, prepared to defend the Azure Dragonshrine with her life.

Yet none of this came to pass, players beat Deathwing and this future didn’t actually happen – or did it?

Going back through each of those descriptions of the Echoes I can’t help but notice how every single character except for Baine has gone down a similar path. Sylvanas has unleashed her fury on the living (the burning of Teldrassil, among other things), and continues to do so in Shadowlands. While Tyrande has not completely lost sight of the light of Elune like her End Time version did she has become the Night Warrior, a much darker aspect that could be described as being cloaked in midnight. And Jaina… Jaina went through the horrific loss of Theramoore and was prepared to defend it with her life, an act that resulted in the death of the Archmage Rhonin.

Similarly, another old god has appeared and tried to manipulate a dragon. For now, Nozdormu seems unaffected, but for how long? Or has he already been affected? Players saw how distressed  the revelation that the infinite Dragonflight was caused by his own actions made him. Was that the beginning of the dominoes falling?

Whatever happened, is happening or may happen, it’s clear that End Time was more than just any other World of Warcraft instance and had a huge impact on events to come.

In Mists of Pandaria it quickly became obvious that the Horde and Alliance, the outsiders, were bringing a lot of change and trouble to the Pandaren way of life. Yet without the aid of their champions, one of most serious and dangerous threats to their land would have gone unchecked. Aiding Ban Bearheart in his investigations in Kun-Lai Summit, players accompany him as he becomes aware that something is not quite right with the ancient order dedicated to protecting the Pandaren people from any threat.

When players try to gain an audience with the Master of the Shado-Pan, Taran Zhu, they’re heavily rebuffed and Ban plans to do the unthinkable; break into the heavily fortified Shadow-Pan Monastery. No problem right, it’s not like they’re elite ninjas?!

It soon becomes clear that things are even worse than Ban could have imagined. Not one but two Sha have taken over the Monastery, including one very important inhabitant of the Monastery; Taran Zhu himself! With the champions help Ban is able to succeed in his mission and Taran Zhu is freed from the influence of the Sha.

Shado-Pan Monastery is just one of the instances in Mists of Pandaria, but the events of this World of Warcraft dungeon had a significant impact on the rest of the expansion. Without Taran Zhu and the rest of the Shado-Pan Pandaria would have been undefended against many enemies; mantid, yaungol, Sha, and the mogu-Zandalari threat on the Isle of Thunder. In the wider worldc Shado-Pan warriors were instrumental in helping fight the Iron Horde, the Burning Legion and most recently the Horde and N’Zoth’s invasion in the Vale of Eternal Blossoms.

This one was a lot more subjective and dependent on my own opinions with a tad bit of theory work thrown in there. Let me know what you think about this type of post and whether you want to see more like this!

How about you; what is your favourite World of Warcraft instance?

Next up tomorrow is creature where I get to squee about some of the amazing creatures in the World of Warcraft universe and somehow have to keep it down to just three… eep!

Day 30 is a freebie and my choice of topic, however, I can’t decide! I need your help narrowing down my options so I’m putting my four options up for a vote in polls over on Twitter. The first two options are up this week, the other two will be up next week and the winners of both will go head to head in one final showdown in week 3.