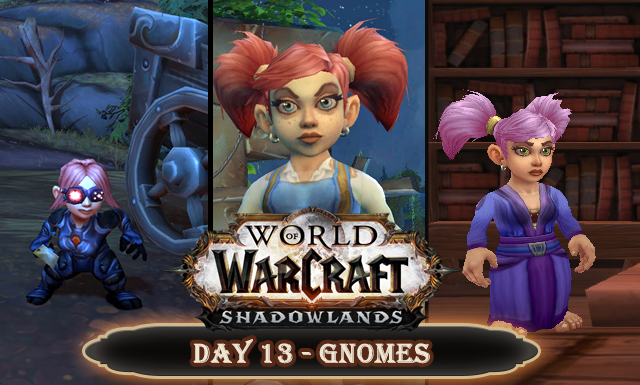 Hello everyone and welcome to day 13 of my 30 Day World of Warcraft Challenge that is counting down the days to the release of Shadowlands! Every day in November I will be posting about World of Warcraft based on the prompt list below. Today’s prompt is ‘gnome’ and I’m telling you all about three kickass female gnomes from the game.

My lack of being able to use the alphabet continues and ends with today’s post (although it is Friday the 13th, so I’ve probably just jinxed myself even more!). While gnomes come in only one shape and size, their range of talents and passion for their work is so diverse. Today I’m going to be talking about three wonderfully kickass female gnomes from World of Warcraft (sorry boys!) who each represent a completely different field. What unites them is their devotion to being the best in their field and to use that knowledge to help others. Read on to find out who these badass gnome ladies are!

“A? No no no. I have SEVERAL knife collections.”

This quick-thinking covert ops agent is known for her love of weapons and blowing things up. Kelsey’s also the woman you send when you want a job done well. She’s got a multitude of talents that range from spycraft to mechanical engineering and sabotage. If she has to she’ll resort to disguises, but she’ll much rather show people “how gnomes get things done”.

She’s not above breaking some rules to get things done if she has to, and she has the brass to do something as bold as arranging for Mekkatorque’s escape pod to be secretly delivered to Mechagon Island so that she could request help from the Rustbolt Resistance – without asking for approval first. Kelsey knew she wouldn’t get it, and went with the whole idea of ‘ask forgiveness not permission’  as she was sure the mechagnomes held the key to helping save Mekkatorque’s life.

Hopefully, we’ll continue to see more of this kickass female gnome in Shadowlands!

“While I cannot approve of your methods, I’m glad we’re working to- gether on this. You were right. You knew I’d want to be involved. I may have come here kicking and screaming—literally—but I stayed because I wanted to. And be- cause—Because I’m glad that we found each other again. This Azerite is powerful stuff. Its natural state is toward growth and healing. Maybe even Gallywix will understand that it’s much better to put it to those kinds of uses.”

The first time I met Sapphronetta ‘Saffy’ Flivvers she blew me away. There was something real about her, she was genuine and honest, connecting with her night elf guard Cordressa while her fellow Explorer’s League colleagues found them odd and offputting. Despite feeling more at home in a lab and nervous about being on her first expedition (especially with so many goblins nearby) she still managed to see the beauty in the outside world.

That is Saffy all over though; seeing in the marvel in everything. In Before the Storm she ends up kidnapped by the goblins and forced to work with azerite alongside her ex-husband Grizzek. She’s not happy about it, especially not the kidnapping part, but chooses to make the most of it – not before making a demand of her; she gets Feathers the mechanical parrot Grizzek made her for their anniversary. Even then, completely out of her depth and surrounded by the animal, Saffy holds onto her beliefs and tries to convince the weaselly penny-pinching Trade Prince Gallywix that he can use azerite for something profitable other than weapons. Naturally, he laughs in her face, yet she gets the last laugh when she destroys all their notes leaving Gallywix with nothing.

Alliance players finally get to meet Saffy and Grizzek in-game when Kelsey sends them to look for her friend. They’re found to be still hiding from Gallywix’s goons, and the pair disappear again only to reappear sometime later in Boralus. They’re recruited for the mission to Mechagon with Saffy stating clearly that she’ll only go if Grizzek goes too. On the way to the island, she’s reunited with her old mentor Tinkmaster Overspark who she thanks for inviting them along. Overspark promptly remarks on her lack of patience is why she ended up a member of the Explorer’s League as opposed to being a member of the Engineering Guild. Saffy chooses to ignore him as he alludes to them being useful only due to their expendability. Instead, she bides her time and when the moment is right, she steps in and speaks over Overspark when he is making a blubbering fool of himself to Prince Erazmin.

If it were any other it might have been a power-grab, however, when Saffy commits the Alliance group to the cause of the Rustbolt Rebellion it’s because she cares. Unlike Overspark she isn’t thinking about the technology they might uncover on the island, she’s thinking about her mechagnome cousins. She found joy not just in the wonders of what mechagnome technology could create, but also fun things it could be used for, such as the Azeroth minis created by Jepetto Joybuzz.

Saffy is one of a kind who sees the world as a wondrous place rather than something to be conquered and analysed. With her talents, she could easily sit back and make some gold, but she would rather be out in the world helping make it a better place.

“People don’t take me seriously. This often  denies me opportunities to be useful. I find it rather frustrating. So, no. I don’t  enjoy being perky.”

As Kinndy only appeared in the novel Tides of War I’m popping this under a spoiler tag for those who haven’t read it.

What Garrosh did to Theramore is one of the biggest tragedies in World of Warcraft history, and it’s made even more so by the loss of characters that players got to know over the years in-game. From Jaina’s night elf bodyguard Pained, to Archmage Tervosh and so many other quest givers and NPCs in the city. One character that wasn’t in-game was Jaina’s apprentice Kinndy, and while we only knew her for a short period of time in the pages of Tides of War, it felt like we knew her for a lifetime.

The extremely perky little gnome was Jaina’s equal; an intelligent self-assured apprentice who stood up to the leader of the Blue Dragonflight without any qualms and had a heart as big as her mentor. After being taught to play a board game by Tervosh Kinndy quickly found herself lacking in partners having mastered the game so well. When she challenged the unknowing Kalec to a game he was rather relieved when their game was disrupted and he could escape from it.

She joined the battle of Theramore and alongside the Kirin Tor mage, Thoder Windermere helped to keep the western gate magically protected. Kinndy did a fantastic job and the gate didn’t fall during the battle, something that Jaina noted with pride. Despite her courage in battle the young gnome was deeply disturbed by the horrors of war she was seeing for the first time and confiding in her mentor she stated, “I don’t think I’ll ever be able to laugh again. Why me, lady? Why did I survive and all of them didn’t?”

Those words sound bittersweet to me now as I write this as Kinndy did not survive the mana bomb Garrosh dropped on Theramore. She was decimated along with Pained, Tervosh and all the other Theramore citizens I mentioned. She had so much promise, was filled with so much joy, hope and love for everyone and everything. She could have become the greatest mage of her lifetime, and she never got that chance.

She never did get to laugh again, but she will be remembered as one of the best gnome and most kickass female gnomes from World of Warcraft.

I hope you enjoyed reading all about these three kickass female gnomes! Maybe one day I’ll get a chance to write about their male counterparts and share what makes them special.

How about you; who is your favourite gnome?

Next up tomorrow we’re back on track alphabetically as I talk about my three favourite humans. Check back tomorrow to see who they are!