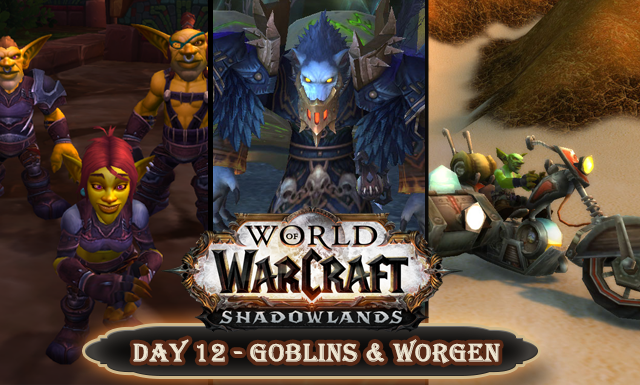 As mentioned yesterday worgen were missed off the original prompt which left me with a problem. The easiest solution was to make today a double feature of goblins and worgen from World of Warcraft as both races were introduced together in the same expansion. Rather than try to fit six characters into one post I’ll be talking about two of each.

I have a confession to make; I’ve never been a big fan of goblins. They stand for everything I detest and their sense of humour just doesn’t match up with my own at all. It isn’t an Alliance vs. Horde thing; I just don’t get them. However, there are a few that managed to break down that barrier and have become some of my favourite characters. Here are the goblins who were just too memorable to forget.

At the Dragonmaw Gate, Twilight Highlands.

Ok, technically this is more than one goblin, but how can you talk about just one member of the Gob Squad without talking about all of them? They come together and cause mayhem together. I’ll admit, when I first met them I groaned, a lot. I was like, here we go again more goblin chaos. Then bit by bit they grew on me.

This elite goblin squadron may get things done unconventionally and with lots of explosions (completely conventional for goblins, of course), but they do get the job done one way or another. While it’s silly it’s not too ridiculous and the banter as they go is always fantastic to follow.

“And uh, thank Gazlowe for me? I owe him one, so I’m gonna pay it with some advice for you to pass along. Never get involved in political engineering! Never!”

I was prepared to hate Grizzek when I first met him in Before the Storm. Not because he was a goblin, but due to how he had treated Saffy. Then we actually met him and it became obvious that it was a couple thing and neither of them was perfect. Grizzek is a heartwarming goblin who just wants to make inventions, what’s so wrong with that? He hates it when Trade Prince Gallywix bullies him into using his inventions to make weapons out of azerite and dreams of all the wondrous things he could be doing instead. He’s a dreamer, and a hopeless romantic, proposing with a stunning azerite ring just as he and Saffy are about to make a run for it.

When it came to picking worgen characters the problem I faced was finding characters that were actually worgen and not human. There are plenty of Gilneans that I love but not all of them were affected by the worgen curse and they remain human. /facepalm Many worgen characters we see are unnamed NPCs, and while I like Crowley I don’t really consider him a favourite. As for Genn… from a writer’s perspective he’s a great character, from a personal perspective he’s a prejudicial ass who needs to get over himself.

So let’s talk about some lesser-known worgen characters who have left a mark on my heart.

<Zinnin’s gaze meets yours while standing in quiet contemplation. His stare remains steady as he places a fisted hand over his chest, making an unspoken oath.>

Zinnin is proof that a character doesn’t need to say a word to have an impact. He has not spoken since the day he was present at the Maelstrom and beheld the raw chaos energies when the other Dragons unmade Deathwing. Zinnin is a quiet yet steady warlock companion who alludes power and attitude through looks and snarls. At the start of the class campaign, Ritssyn Flamescowl is wounded and Shinfel Blightsworn suggests leaving the orc warlock behind and focusing on controlling the pit lord who controlled Dreadscar Rift instead. It only takes one look from Zinnin for Shinfel to mutter “Fine, stubborn worgen!” and forgo power and agree to find a way to escape first and foremost.

Celestine of the Harvest

“But such things pass, as shall we. Only the earth and her secrets will remain.”

Celestine appears in several places and quests in-game from Cataclysm onwards, helping with the restoration of Western Plaguelands and Mount Hyjal as well as playing a role in Hallows End each year. She plays a more active role in Legion where she joined the fight against the Burning Legion, first when the Temple of Elune was attacked in Val’Sharah and later as a member of the Dreamgrove.

Prior to becoming a worgen, Celestine considered herself to be a harvest witch, an old Gilnean faith which she would later recognise as druidism. During the Battle of Gilneas, she passed on what she knew to adventurers, most likely so that they could help during the battle. She survived the battle albeit as one of the infected and found that her druidism helped her maintain balance within herself, enabling her to control her bestial side. Helping others and sharing what she has learned is important to Celestine, and while isn’t always in the thick of things she can be found on the sidelines doing what needs to be done. She is delighted that she has been able to share the tradition of the Wickerman Festival with the Alliance and help revive it as part of their Hallow’s End celebrations.

How about you; do you have a favourite goblin or worgen from World of Warcraft?

Next up tomorrow we head to the other engineering race of World of Warcraft; gnomes! Sorry, dear Horde readers, I’m afraid there are a few Alliance days coming up until we get to day 16 (Orcs)! Then it swings the opposite way after pandaren and it’s Horde races for several days.

Image Credits: Gobsquad image is from Wowpedia, all others are from my personal collection.