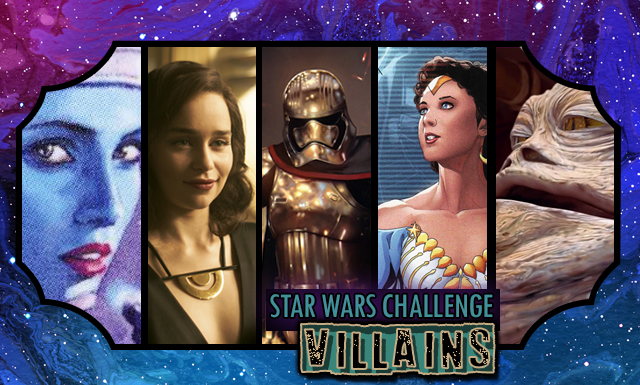 Hello and welcome to day thirteen of my Star Wars challenge! For the next 31 days, I’ll be posting once a day with a Star Wars themed post. Some days I’ll be talking about just one thing, other days it’ll be about 5 things based on the prompt of the day.

Every story needs a villain, and Star Wars has a huge variety of them. Many, if not all, of the Imperial characters I talked about also fit the bill. There’s just something else about these characters thought that caught my attention. They’re just so good at being bad.

Time to share with you 5 badass Star Wars villains that caught my attention.

You’re probably wondering why one of the most disgusting characters in the Star Wars universe is at the top of this list. Not only is Jabba essentially a giant slimy slug his personally matches his physiology. He’s a misogynist who enslaves beautiful women of other races and parades them around in skimpy outfits for his own pleasure, forcing them to feed him and bathe him. When they fail to please him, as Oola did in Return of the Jedi, he has them killed for sport so that even in death they continue to give him some form of entertainment. In short, he’s a despicable being who lives a life of luxury and abuses his power.

It’s the fact that he got that power and retained it that caught my attention. The Hutts are a cut-throat bunch and rising to power in their world is no easy feat, neither is holding onto it once you do. While Jabba ultimately met his demise at the hands of Leia Organa after failing to recognise Luke Skywalker’s true threat value, his instincts were usually good and he was a savvy businessman. He made deals with the right people, ensuring he and the Hutts survived the political changes of the galaxy and remained on top despite being major players in the criminal underworld.

Like all major power players, Jabba became complacent, and when Luke Skywalker strode into his Palace he believed he was untouchable. Although Obi-Wan Kenobi had been a thorn in his side for many years, he had always struck from the shadows of the desert and never as boldly as Luke. Jabba definitely didn’t expect one his own slaves, Leia, to turn against him and use the shackles of her slavery as her weapon. And so for all his planning, deals and manipulation His Excellency Jabba Desilijic Tiure of Nal Hutta, Eminence of Tatooine was no more.

There was something about Qi’ra from the moment we met her again on Dryden Vos’ yacht. Gone was the idealistic young woman who was going to leave Correlia with Han Solo, and in her place was someone with secrets. I list her as a villain because of how Solo: A Star Wars Story ended. Rather than walk away from the life she had been forced into by slavery she chooses to take over Crimson Dawn, and honestly, I’m not sure if that was her intention all along or it was just a happy accident.

There’s no denying that she has had a difficult life and had to make some tough decisions to survive, however, she had a chance to walk away from it and she didn’t take it. I honestly think that if her goals had not aligned with Han’s she could have happily shot him in the back. I don’t necessarily consider Qi’ra a bad person, however, as the new leader of a crime syndicate that answers directly to Maul she’s hardly innocent. Some may perhaps consider her an anti-hero, but anti-heroes usually need to do something heroic and I’m not sure I feel comfortable calling her actions heroic. Everything we see her do in Solo is to ensure that Vos gets his coaxium shipment.

At the moment we know nothing else about Qi’ra. She’s mentioned briefly in one of the comics when Han tells Leia about his past, referring to her only as ‘a girl’. As to who or what she became after the end of Solo, it’s currently a mystery and one I hope Disney intends to fill in at some point as she’s a fantastic character with so much potential.

A spoiled brat if there ever was one, Queen Trios grew up in privilege on Shu-Toran, a mining planet under Imperial rule. When Imperial quotas began to grow larger the planet’s rulers began to resist and her father decided to assassinate Darth Vader when he next visited. As you can imagine this went as well as can be expected, resulting in the death of her entire family. Sparing Trios’ life, Vader kept her as a servant and informant, and she became Queen.

As Queen Trios staged a large scale con with the Rebellion, pretending to leak Imperial plans and approaching Leia with a plan to betray the Empire. In truth, it was all a ruse and Trios was working with Vader to trap the Rebels. That in itself is not so bad, after all, she had been forced to work with Vader after her father’s failed assassination attempt. She was just doing what she needed to do to survive, right? That would be true if not sure the total lack of empathy she shared for anyone else, including her own people. To keep her secrets she stood by as her own personal guard was massacred. When asked by the Empire to mine Jedha for kyber crystals she showed no remorse for the damage it would do, commenting only that “If anyone can bleed Jedha’s husk dry of kyber, it’s us.“.

In the end, her own treachery resulted in her downfall, and where Trios could have made an important ally in Leia Organa she ended up making an enemy.

The unrelenting Captain Phasma was a much needed female villain in the new trilogy. In the Galactic Empire and even in the First Order there are very few women, and it was a relief to find that she wasn’t just a token role. I’ve yet to read Phasma: Journey to Star Wars: The Last Jedi, but I know that it goes into great detail about her past and fleshes the character out. While it would have been nice to have learned more about her on-screen, we do get to see a strong woman who is willing to do anything to survive and keep the life she has carved out for her. She’s worked hard to get to where she is and her loyalty to the First Order is based on that not on its core believes.  Phasma is a survivor, and first and foremost she will always be loyal to herself.

The lengths she will go to in order to protect herself are seen in the Captain Phasma comic. After being forced to deactivate the shields of Starkiller base by Finn and Han in The Force Awakens she invents a traitor and sets out with a pilot and droid to hunt down an innocent member of the First Order. Identifying him as the perpetrator of her own crimes, she hunts him down and assassinates him. Then to ensure that there are no loose ends she murders the droid and pilot, leaving no witnesses to her actions. Returning to General Hux she tells him she has hunted down the traitor responsible for the destruction of Starkiller base. When he questions her lack of procedure, Phasma assures him she has a full report waiting for him.

Hux accepts that answer and Phasma has managed to successfully tidy up her mess and emerge from it with her reputation untarnished. The deaths of her comrades are listed as losses during her mission, and no one is any the wiser as to the true nature of their demise. Phasma’s next meeting with Finn in The Last Jedi is fuelled with vengeance and shame. The former stormtrooper is a living embodiment of her failure, as a leader, as a trainer, as a member of The First Order. Everything she worked so hard for was compromised by a ‘bug in the system’ as she calls him. Survival, not just her orders, dictate that she eradicate him. In the end though, it is Finn that walks away from their duel alive, leaving Phasma to die in the rubble.

Alema didn’t start out bad, and her tale is one of pain and darkness. However, what she did with her pain and the twisted thing she became afterwards despite the many attempts to help her was all on her. She was someone who revelled in her own suffering, not wanting to do the difficult task of trying to heal. Feeling pain, spreading it to others and making them feel how she did was much easier. She blamed others for the loss of her sister and everything she had lost since when in truth her own actions had led her down that path.

She finds a place on this list because she was a truly difficult adversary for the New Jedi Order, and while she was mentally unstable, twisted and cruel she featured in some of the best storylines.

What catches my attention in a villain can be quite different to other people. Most people tend to name Darth Vader as their favourite Star Wars villain, and I’ll be honest, I’ve never been a huge fan. Other than his essential role in the entire fandom and his exceptional use of the Force I simply don’t find him that interesting as a villain.

What about you guys? Who is your favourite Star Wars villain?

Pop your answer in the comments!

Image Credits: Qi'ra image is from the Adoring Emilia Clarke Gallery, All other images are from Wookieepedia, Alema Rar image is from The Force.net.