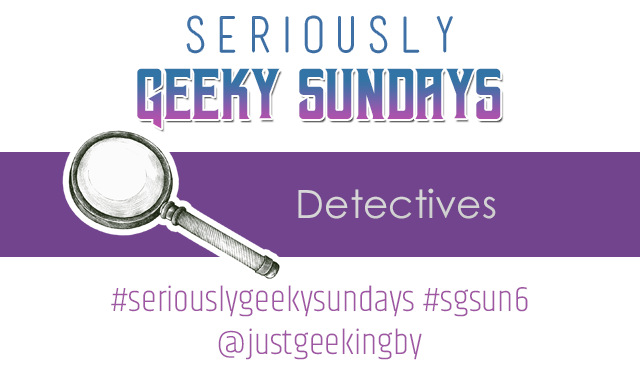 Detectives are one of those wonderful character types that you find in almost every fandom, or they can exist entirely alone in their very own genre. They mix things up, putting people on edge or colluding with them to work a problem. I tend to meet a lot of detective characters in my fandoms. Some of them are actual detectives or law enforcement of some type, others are licenced private investigators. Then there are the characters who just love solving mysteries, or know what goes bump in the night and do what they can to help the people who accidentally stray into those unknown waters. I love how much variety there can be with detective characters and you can read on to find out more about some of my favourites 🙂

My answers for week #7

When you think of fictional detectives, who is the first one that springs to mind?

As I watch a lot of crime dramas there’s a lot of detectives to choose from, but the first that sprang to mind while I was writing this post (other than the legendary Sherlock Holmes) was Leroy Jethro Gibbs from NCIS. NCIS is one of the few shows that is actually showing a new season in the UK right now so I’ve been watching the new season recently. There’s a very Gibbs central storyline happening this season so he was at the forefront of my mind, plus he is just a fantastic character and legendary detective in his own right.

Do you have a favourite fictional detective?

This was a tough one for me because a lot of my fandoms have a fictional detective in them, whether it’s a crime TV show or an urban fantasy series, there’s usually someone who fits this role. I think right now my favourite fictional detective is actually a PI from the show Private Eyes. It’s a Canadian show, and she’s one of the two main characters; Angie Everett played by the wonderful Cindy Sampson. She agrees to take ex-hockey player Matt Shade under her wing and teach him the ways of being a PI after he and his sports connections prove useful on a case. Gradually Shade grows on her, and their partnership grows as the show progresses.

The reason I really love Angie as a character is that she is completely natural and genuine. There are many moments on the TV when she makes mistakes or makes these adorable ‘oh crap’ faces where she’s forgotten something, or something doesn’t go to plan rather than remaining a stoic aura. She’s also one of the few female investigators on screen right now that isn’t a cop, a medical professional or an investigative reporter. She learned everything she knew from her dad, who was in the force before becoming a PI, but after he died she continued his PI business on her own. Shade joining her was something that helped him out and not the other way around, which I really appreciated. That’s not to say that she has everything worked out in her life, because, who does? But she’s not portrayed as a flighty woman who had a struggling PI business that needed to be saved by a man or anything like that. She has so many talents and hidden depths, and it’s a delight as new ones are revealed each season.

What fandom featuring a detective do you enjoy the most?

I think it’s got to be Supernatural for me. The Winchesters may not be bonafide detectives, despite how many law enforcement officers they impersonate, however, they are certainly qualified when it comes to investigating the paranormal. While the series calls them hunters what they do is much more complicated than that in my opinion, and they use a vast array of investigative skills to find creatures and solve the problem, just like any normal detective would. The reason why I enjoy this fandom more than others is probably the vast scope of it; it covers everything from heaven, hell, in between and so on (I’m on series 14, please do not spoil the rest of the show for me).

Which fictional detective would you like to shadow for a day?

I was going to choose Harry Dresden from Jim Butcher’s Dresden Files, but on second thought I’d actually pick a character that is much newer to me; Al MacBharrais. He’s the protagonist of Kevin Hearne’s Iron Druid Chronicles spin-off series, Ink & Sigil (read my review here) and based in Glasgow. I’d love to follow one of the three druids themselves for a day but as they’re not detectives they don’t count 😛 So shadowing Al would give me access to the incredible world of magic and myth that Kevin Hearne has created while also offering me the chance to spend time with an incredible detective that works directly with the Fey and Celtics god/goddesses!

The infamous Sherlock Holmes by Arthur Conan Doyle has been adapted many times now and in many formats; do you have a favourite?

I remember when I first started my English Lit degree back in 2011 all my classmates were obsessed with Sherlock. I didn’t mind it, I watched it and liked it, but it wasn’t the best thing since sliced bread as these 18-year-olds seemed to think it was. I much preferred the other adaptation that was out at the time and it’s still my favourite one to date; Elementary starring Jonny Lee Miller and Lucy Liu. Normally transplanting something British from Britain to the US would get under my skin and annoy me, yet for Elementary it just seemed to work. I think it’s because it didn’t try to Americanise the idea of Sherlock Holmes. Sherlock was still very much British, and unlike Sherlock and the movie adaptations starring Robert Downey Jr. Jonny Lee Miller captured the raw chaos of a genius ex-addict who saw the world differently and didn’t play by anyone’s rules.

The best example I can give for this is the way Sherlock utilised the hacker collective ‘everyone’. He would use the collective to gather information for cases and pay the often ridiculous price they demanded as payment for their services. Their currency was not in the form of money though; it required Sherlock to do something bizarre and usually humiliating which they would observe through surveillance cameras. Later in the show, everyone began to require Joan Watson to take part as well, and at first, she refused, not understanding why Sherlock did it every time without argument. To Sherlock no price was too great, even his own humiliation, to solve a case. In other adaptations his ruthless pursual of the truth is shown, as is his anti-social personality, however, only Elementary showed him doing random (and often destructive or dangerous) experiments in the home he shared with Watson. These weren’t even pertaining to the case at hand, it was just something that he didn’t know and wanted to learn.

I also absolutely loved the version of Moriarty in Elementary and felt like the character actually embodied the villain of the original novels.

Bloggers have started to go missing and you have been given the task of putting together the greatest detectives in the world to find them! Who do you pick?

I would probably choose all the ones I’ve mentioned in this post, but that’s a total cop-out so here’s a new list 😉

I really enjoyed this week’s topic and I hope you had as much fun reading as I did writing my answers!

Who is your favourite fictional detective?