Seriously Geeky Sundays #50 – The World Wide Web of Us 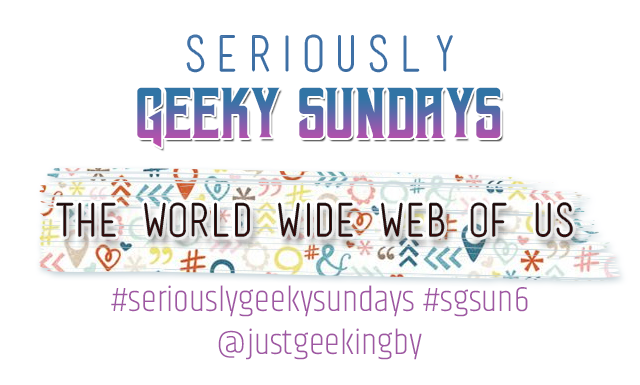 Welcome everyone to the nostalgia-fest that is Seriously Geeky Sundays week 50. In 1989 on March 12th Sir Timothy Berners-Lee invented the internet and it’s that amazing invention that lets us connect to each other today as we take part in another week of Seriously Geeky Sundays. It’s been an invaluable resource in the last year, and as someone who has been in self-isolation for those 12 months, it’s been a lifeline to the outside world. Today we’re celebrating the thing that has allowed us to stay connected with our loved ones during this difficult time and also connected us with likeminded people throughout the world for many years.

The World Wide Web of Us

When did you first start using the internet?

Although the internet was first invented in 1989 when I was just a child it didn’t reach households until I was 13. I remember my dad, like many other adults, being tentative about trying out this ‘internet thing’ and it was really me who used it the most. For me it was a portal to everything that was missing from my life, and it came at a point where I was being bullied heavily at school. It didn’t take me long to find people like me online, geeks, who were welcoming and the internet quickly become a place to escape when I got home from school.

What nostalgic things do you remember from your early days of the internet?

I remember yahoo chat rooms, especially the roleplay rooms which were one of the first places I called home. This was back before they stopped user created rooms and then closed the chat rooms altogether. I also remember blogging back when it wasn’t always about money, and people recycling the same content that other people had already posted somewhere else. Back when it was something that only people who could code and design did. While I’m glad that it’s become more available to people (many bloggers I love would not blog if it wasn’t), I miss the community and the time when the idea of a blogger having a lawyer was ridiculous. It’s the same way I miss there being web cliques for everything under the sun.

I remember ‘The Palace’ where you could go into rooms/servers and collect items to make dolls and get lost in there for hours. I had a massive collection of items that I was quite proud of, and while it was pointless, it was fun. A lot of the internet used to be fun and while there are more games than ever so many of them are behind a paywall. The world caught up and realised that there was money to be made from it. I recently returned to Neopets (I finally got my old account unlocked) and I was dismayed to see that even it has fallen into that trap.

How long have you been blogging?

I originally started blogging way back in 2003/2004, and then stopped. I resumed some years later with a World of Warcraft blog detailing my exploits in Azeroth but that didn’t last long. Eventually, I started this blog in 2011 to document my time at University and it expanded into its current version over time.

Did you ever belong to any online fan clubs or message boards?

Plenty, I think I’ve been in every type of online club and message board since I started on the internet. I started in yahoo clubs, then topica and yahoo groups, before moving onto message boards and then when social media came along I moved onto Facebook groups etc. I’ve been on LiveJournal and all of the other journal offshoots. Most of them were roleplaying or roleplay support groups, whereas others were fan clubs usually for authors such as L.J.Smith or Tamora Pierce. I was a member of Sheroes board for a while, and also the Star Wars site Theforce.net. I’ve also been a member of some graphics design communities on Livejournal.

Basically, I’ve been around, a lot.

What are your favourite sites on the internet?

My favourite part about the internet is that it allows me to learn new things and see things that I normally wouldn’t. There are a lot of cool and interesting sites out there, fun games and so on, however, for me, my favourite sites are those that give me access to information and beautiful things or are sites that I find useful. Here are some of my favourites:

Do you have any geeky online stores to share with us?

One of my all-time favourite geeky stores is Truffle Shuffle because it is one of the only places that sells awesome retro 80s and 90s fashion, including Care Bears, She-Ra, Teenage Mutant Ninja Turtles and so much more. Their stuff is also fantastic quality as well.

If you’re more of a fan of more modern fandoms then EMP has got you covered. With everything from Disney to anime, Marvel and everything in between. It’s also a haven for gothic and rock fans too so you get a lot of great darker products which is great if you’re a Disney fan and fed up with everything being bright and cheery all the time.

Another favourite of mine is Wild Bangarang which started with World of Warcraft products and has since expanded to include several other brands including Dungeons and Dragons, Magic the Gathering, Moomins, My Little Pony and many more. As you can see it’s an eclectic selection. They are known for their extremely detailed graphic designed leggings – for men and women – wunics (tunics with hoods), dresses, hoodies and t-shirts. I’ve never bought anything from these guys but I’ve seen their work and it’s as impressive as it looks online as it does in person.

Thanks for joining me today for some internet themed nostalgia, I hope you enjoyed the ride through these memories!

What are some of your memories from your early days on the internet?