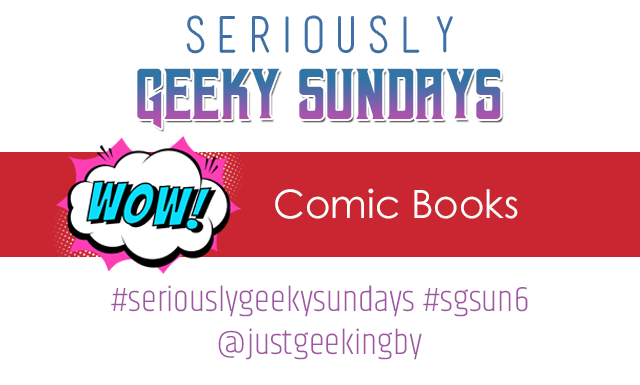 Normally the 1st of May is Free Comic Book Day, however, due to the pandemic, the organisers have chosen to move it to August with the hope of being able to celebrate it when stores are open again. I considered changing this week’s Seriously Geeky Sundays theme and then chose not to; it might not be Free Comic Book Day but we can still celebrate our love of comics today 🙂

My answers for week #5

Let’s start at the beginning; what was your first comic book?

I didn’t go the usual route into comic books that most people went. I had no one in my life to introduce me to them. Most of the geeky boys I knew were into science, video games or Warhammer, there weren’t any comic book geeks and if there were they never shared their passion with me. Instead, it was my own curiosity that brought me to comic books. Instead of reading DC or Marvel, I reached for ones in fandoms I was already familiar with; Star Wars and Buffy the Vampire Slayer. One of the first comic books, I remember reading was Star Wars: Mara Jade by the Emperor’s Hand, the only way to read Mara Jade’s origin story by Timothy Zahn. I’d fallen in love with the character in the Thrawn Trilogy and wanted to know more, so I hunted down the comic books on eBay. That was the only way to find them back then.

Which comic did you read recently?

The most recent comic I read was one of the latest issues of Dejah Thoris (2019). While I’ve yet to read the original books that the comics are based on, I’ve thoroughly enjoyed all the Dejah Thoris comics and was drawn to them by the gorgeous artwork. I found that the story was as intriguing as the art, and Dejah was a fierce warrior that quickly captured my attention. The latest series has a brilliant storyline and cast of characters and I’m really enjoying it.

Which comic series would you recommend to someone just starting to read comics?

For people unsure about whether they’ll enjoy the format of comics, or be able to process images and pictures at the same time (there’s no shame in either, we’re all different) I would advise doing what I did and start with a fandom you’re already familiar with. Almost every movie, video game, TV series and even some books have a graphic novel version or comic book spin-off available. Your familiarity with the characters and your curiosity will help ease you over any unease at the format.

If you’re wanting to dive straight into comics then some of the ones I recommend are:

** A lot of people recommend The Sandman and Lucifer, however, to people new to comics I wouldn’t recommend these as first time reads. They are very dense reading and the first volume of The Sandman also uses a terrible font rather than the normal font that is now universally used across all comic books. The Books of Magic and the House of Whispers exist in the same universe and are both much easier reads, which will give readers an introduction to the Endless (the core cast of The Sandman) without overwhelming them.

As for DC Comics, I found that when it comes to DC and Marvel if you ask for recommendations as to where to start everyone will line up with suggestions as to which series they think is the best because that is their personal favourite. When I started I didn’t want to read X, I wanted to start at a chronological point where I could read everything. Where I could read Batman issue 1, Wonder Woman Issue 1 and Superman Issue 1 and so on. Luckily, DC has been rebooted multiple times and I found a place to start that works really well for new readers; The New 52.

The New 52 doesn’t require knowledge of prior events (you’ll eventually learn why) and you can always go back to read the large events like Infinite Crisis or Blackest Night when you’re ready.

For Star Wars comics, please check out the list of recommendations I wrote over at Geek for the Win a few years ago.

What comic series do you have on your TBR (to be read) list?

I have quite a few random ones on my TBR, but the two “big names” are Hellboy and Fables. I’ve been meaning to dive into them for a while and I’ve just never got around to it. I’m not sure what’s holding me back, I’ve just not felt the urge to read them yet. One day I will get to them; I’ve learned not to push and just wait until it’s the right time for that particular itch to be scratched 🙂

What are some of your favourite comic book series/titles?

One of my favourite comic book series is Saga and the reason I didn’t list this as a recommendation is that at present it ends of one of the nastiest cliff hangers of all time and no one warned me about it before I started reading it. The writer and illustrator creator duo ended on a cliffhanger in 2018 and said they would be taking a year’s break for personal reasons, which is fair enough. The way they ended it was cruel and unnecessary; they didn’t need the hype or the sales, it’s been a bestseller. That was 2018. While the pandemic could not be helped, the year’s break clearly went on longer than a year even before the pandemic started. There’s now a date for a return but I’m not holding my breath, to be honest. So while I love this series and I really do recommend it, I don’t recommend reading it until it’s back being actively published because it will eat at your heart.

I wasn’t a big fan of the original Lucifer series, however, the Holly Black 2015 series is brilliant. It was everything I expected from a series about the devil. In general, I wasn’t that enamoured with a whole lot of The Sandman series. There were some of it here and there that was brilliant, but I much prefer the Books of Magic, the Books of Faerie, the Dead Boy Detectives and of course, Hellblazer.

Who are your favourite comic book artists?

I was always going to be drawn to comic books eventually because they are the perfect mixture of two of my favourite things; art and stories. I can’t always name the artist, but I’m beginning to recognise styles and a few that I can name on sight are:

Many of the comics I’ve talked about today are available to read with Kindle Unlimited. Using my referral you can get three months free. Sign up today!

Which comic book do you recommend that I add to my TBR?