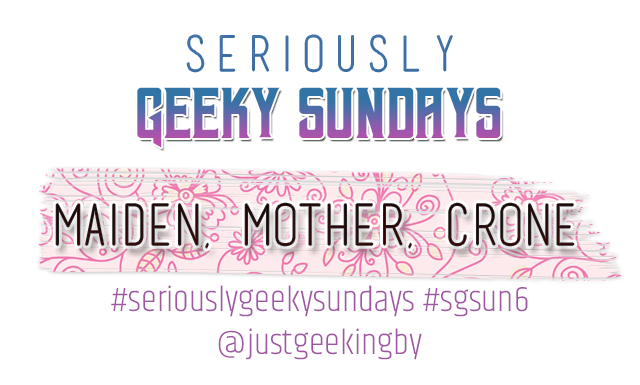 This week’s Seriously Geeky Sundays’ topic is dedicated to female characters. Tomorrow is International Women’s Day (IDW), a worldwide celebration of women and coming up in the UK is Mother’s Day. Pagans may recognise the name for this week’s theme; Maiden, Mother, Crone is the name given to the Triple Goddess in Paganism. It is a way in which we honour the triple Goddess and femininity. Women come in all shapes and sizes, and that is something I wanted to emphasise with this week’s theme.

Join me as I take you on a journey through my fandoms and talk about the women in fiction that have made an impression on me over the years.

The answer to my final question briefly discusses abuse and the amazing women who have talked openly about it. Please skip that question if reading it will be triggering for you <3

Who is your favourite leading lady?

When I wrote these questions I didn’t think about how I’d narrow down my answers. In truth, I have a lot of favourite leading ladies, and I could talk about them all for years if you let me. The one that stands out above the rest though is Phèdre nó Delaunay the protagonist of Jacqueline Carey’s Kushiel Legacy series.

Sold into service as a courtesan at a young age, her marque is bought by a nobleman who trains her to be a spy and a scholar when he recognises the scarlet mote in her eye that marks her as chosen by one of the gods. Her life never promised to be easy, but when it’s turned completely upside down Phèdre‘s entire world changes and she goes from a simple spy to something even more. She becomes embroiled in plots that threaten to tear down kingdoms, meets people that are supposed to be just myths and becomes a legend in her own right.

All the while she remains just a woman, she never gains any magical powers save for one ability bestowed upon her by the god. Without the training of her mentor, that ability isn’t remarkable, but in the hands of a courtesan who is also a spy and a scholar, it’s a powerful thing that can bring people to their knees.

Which kickass female fighter do you admire?

I couldn’t pick just one so let’s start with two kickass ladies who fight side by side; Sara Lance and Nyssa al Ghul from Arrowverse. Both are trained assassins skilled in multiple martial arts and with a variety of weapons. Alone they are competent fighters who can take down the strongest of foes, together they are a formidable team that I love to watch.

The other kickass female fighter I had to include is MacGyver’s Desi Nguyen played by Levy Tran. Desi joins the team in season 3, taking over as Overwatch from Jack. While I was sad to see Jack go I quickly fell in love with the amazing Desi who proved to not just be a brilliant fighter, but also smart and adaptable to every situation. While Jack was brute force Desi is skilled perfection and watching her fight is a joy.

It’s even more impressive when you learn that the actor who plays her, Levy Tran, is trained in multiple martial arts including eskrima, muay thai boxing, and jiu-jitsu. She’s a complete badass in her own right, which makes it even more delightful to watch when she takes down bad guys twice her size.

Who is the most badass female villain in your opinion?

When most people hear the name Melisande they associate it with Game of Thrones, for me it will always be the name of another villain. This Melisande hails from Jacqueline Carey’s Kushiel Legacy and is the villain to Phédre’s heroine. This badass female villain has no need for magic, her weapons are words and seduction and she’s an absolute master of them. I’ll say no more because I don’t want to spoil the fun for you, but seriously, you should check out Kushiel’s Dart to meet Melisande for yourself.

Do you have a favourite fictional mother or grandmother?

It’s been a while since I picked up a House of Night novel, however, Zoey Redbird’s grandmother Sylvia Redbird always stood out to me as an amazing woman and loving grandmother. Whenever I think of fictional grandmother’s she is one of the first that comes to mind. Despite her granddaughter’s unusual journey and growing powers, she is supportive from day one, offering advice and wisdom not just for Zoey but for her friends as well.

IDW is about celebrating women’s equality and inclusivity in all fields; what characters have championed this cause?

I watch a lot of crime shows and even though there’s a growing amount of female characters in these shows, especially in leading roles within the police force, the majority of them follow the same physical profile. They’re all young, pretty, thin, the majority of them are white and an awful lot of them are blonde. As much as I like Olivia Benson in Law & Order: SVU, she still falls down some of these traps. Her hands are always immaculately manicured, for example, her clothes and hair perfect.

Let me introduce you to DCI Vera Stanhope played by Brenda Blethyn, from the show Vera, based on novels by Ann Cleeves. I’ve not read the books (I watch crime, I don’t read it) so I can’t say how accurate the portrayal is, however, I’ve watched Vera for years and love it. DCI Stanhope would soon as laugh at you about a manicure than get one done. She wears dishevelled country clothing beneath a raincoat and doesn’t have time for pleasantries. However, with victims, she is the most caring individual you’ll ever meet. She puts her time and effort into the things and people that are important, like solving crimes, and catching killers, not fluffing about with small talk.

In a lot of ways, she’s very similar to Olivia Benson, and as I said, I’m a big fan of Olivia, but Vera feels more genuine as a character. More real. Perhaps in a way, Olivia is real too, just in a different setting; New York is completely different from Yorkshire. Olivia can’t do what Vera does for inclusivity and equality because of the setting she’s in, because she has to look the part constantly. Whereas Vera is able to rise above it and just be who she is because that’s enough.

Which women in pop culture inspire you?

The first that came to mind was Felicia Day, however, I was upset to find that in light of new allegations against Joss Whedon she has not said anything against him. So instead I’m going to talk about Charisma Carpenter and Melissa Benoist who have both opened up about the abuse they have suffered. Any woman who has the strength to step up and openly name their abuser is an inspiration to me, not just celebrities, although I appreciate them doing it because their voice reaches many more people.

Melissa’s video was so raw with emotion that I was crying along with her, and it was so important for people to see her, the woman that plays Supergirl, speak about what happened to her. To know that they can become a survivor too not just a victim. Charisma has stepped up to support Ray Fisher by telling her story, and in doing so she’s receiving a backlash as people don’t want to believe that the iconic Buffy the Vampire Slayer was created by an abuser. I remember learning about Whedon’s true nature years ago and the sick feeling whenever I think of Buffy still doesn’t go away. I used to rewatch the show all the time, now I don’t know if I ever will. But that doesn’t change how important it is for the truth to come out, and as someone who knows how hard that it is for these women and others like them will always be an inspiration to me.

Thank you for joining me today to support and celebrate International Women’s Day!

Who is your favourite female character?