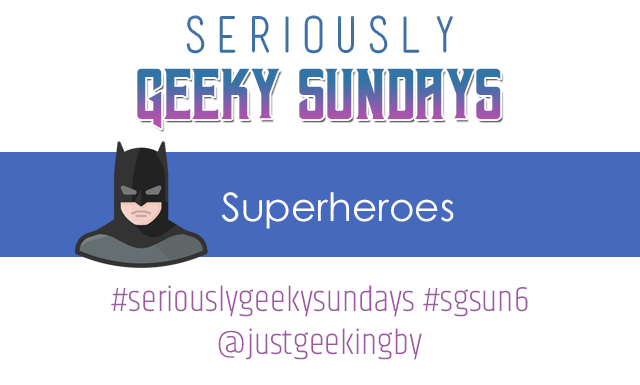 It’s superhero day on April 28th and we’re well overdue for a Seriously Geeky Sundays theme dedicated to superheroes. Don your capes, check your utility belts and grab your sidekicks as we head into the world of superheroes this week!

Also, a week delayed, but better late than never are May’s themes and questions! You can find them here.

My answers for week #4

Who are your favourite superheroes?

I’ve mentioned some of my favourites quite often (Batgirl, and Nightwing) so today I want to mention some that I’ve probably not mentioned before. I absolutely love Jason Todd aka Red Hodd, he is a wonderful anti-hero who never gets enough credit for what he does and he has a fascinating backstory after his time as Robin. Black Lightning is another firm favourite, as is Katana and the two of them together in Batman and the Outsiders is amazing. A couple of others I love are Artemis, Zatanna, Princess Amethyst, Green Arrow, Black Canary, Starfire, the Green Lanterns, and I’m probably missing a few more. There’s a lot.

Do you have a favourite sidekick?

I honestly couldn’t pick just one. I really love the Titans, Teen Titans and the Young Justice teams. They have such amazing characters with wonderful personalities, and they’re all still growing into their own roles as heroes.

Who is the most underrated superhero in your eyes?

I already mentioned him in question number 1; Red Hood. He’s always surrounded by amazing heroes, and he’s the black sheep of the Bat Family (although Damian is sure giving him a run for his money). No matter how many times he actually does the right thing, and has just tricked everyone into thinking he’s “gone bad”, his friends and family always believe he has finally done it for real. He’s taken massive beatings from Batman because the guy just can’t put his belief into him for one second, and Jason just shoulders it and keeps on going. He just does what’s needed to get the job done.

Marvel, DC or another superhero franchise?

As you might have guessed; DC. I do like Marvel, however, I’ve not broken into the comics yet and DC was my first link to comics in the form of the 1960s Batman tv show with Adam West.

Who is the scariest supervillain of all time?

There are a lot of scary supervillains in DC and a lot of people would say the Joker, but actually the one that scared the crap out of me is one that was introduced last year. Punchline aka Alexis Kaye swept onto the scene in 2020 as The Joker’s new right hand and partner in crime – in more ways than one. After being held hostage by the Joker she became obessed with him, believing his crimes served a greater purpose. This led to her beginning to poison people and eventually the dean of her college to show her devotion to the Joker and get his attention, which she did successfully.

That’s not what makes her scary. After the Joker was eventually defeated again, Punchline faced a trial for her actions during the ‘Joker War‘. Suddenly the supervillain is gone and poor Alexis Kaye is back, a young teenager who was led astray. The thing is that it’s a massive act, so is the podcast that gets leaked which she apparently recorded before she joined the Joker. As a result of the podcast and her performance, she gets away with everything and that is what was terrifying. She leaked the podcast, she manipulated the media, social media and the public magnifcently. No one wanted to believe that a tiny little woman could be a brutal, sadistic murderer or followed the Joker willingly. So she used the podcast to plant doubt, to play on their worries and fears left over from the Joker War and she played them like a fiddle.

And that scares me more than any of the blood, murder and mayhem that any of the other villains have caused.

What is your favourite superhero movie and/or TV show?

I love all the DC TV shows, and if I have to pick a favourite it would be either The Flash or DC’s Legends of Tomorrow. I can’t pick between the two of them because they’re both fabulous and make me laugh and cry in equal measure.

Thanks for reading all about my favourite superheroes and supervillains!

Who is your favourite hero?