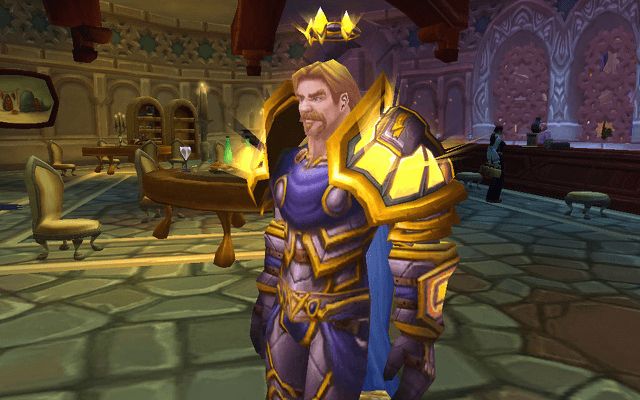 Alongside this week’s #TransmogTuesday I wanted to share with you my favourite Raid Tiers. I’ve been raiding since the start of the game, and have seen loads of tiers come and go now. One of the reasons I love transmoging is that it means old raid tiers are no longer useless, or forgotten. Sure, re-grinding them is a pain but it’s so worth it in the end! Here is my favourite raid tier for each class in the game, excluding Demon Hunters because they only have one tier (and one coming in a week) right now.

Once again, thank you to Wowhead dressing room for helping out because my Wow Model Viewer has issues, including a strong dislike for Pandarens 🙁

I was torn between this version (blue) and the purple version because both look great. There’s something about this tier that screams Death Knight to me more than any other. I really love the Death Knight starting area set and this one has the similar feel. I just can’t really see Death Knight’s in other colours, and prefer to stick to the cool shades of blue and purple.

This was such a hard choice to make! There are so many gorgeous druid tiers, and even the one’s that aren’t quite so beautiful are still exquisite. I just love the shoulders and head piece of this one though, and combined with the green and brown earthy tones I feel it really captures the feeling of a druid.

I was browsing through the hunter raid tiers from 1-20, trying to decide on one that jumped out and grabbed my attention above all others. It was only when I got to the most recent Tier, 19, and saw this set that I found that special one. I’d not seen this set yet and I love the mesmerising gold and green, as well as the details in the hood and shoulders. It reminds me a lot of my current wallpaper of Alleria Windrunner from Hearthstone.

It was a close call between this one and Tier 18 Raiment of the Arcanic Conclave. I think that it is pure nostalgia with this set, along with the traditional red colouring and details on the robe and hood. It also helps that I love the look of these types of hoods on my Night Elf Mage 😀 This one in particular makes her look so powerful and mysterious.

Ok, so I totally cheated for this one. I was good with all the others! This set is not out for another week or so when Tomb of Sargeras opens, but just look at it… it’s so pretty! I love the contrasting colours of yellow and purple, and just the whole style of it screams Pandaren monk to me.

Hands up who guessed this one correctly? I honestly don’t know many people who don’t count this as one of their favourite Paladin tiers, or tiers full stop. There’s just something so powerful about it, and yet, looking at the vibrant colours it shouldn’t work. It should feel too brazen, too overpowering and instead it just works. There’s so much careful detail worked into this design that the more you look at it the more you notice.

I’m very fortunate that my main character for many expansions now has been a priest and has had some absolutely gorgeous sets ( for the most part anyway, we won’t talk about the green nipple one …). However, unlike the Druid tiers this choice wasn’t hard. Tier 3 is the top of the list for me and of course, it’s the only one you can’t farm. I’m really glad that it is possible to get it again even if it is from the Black Market Auction house and will eventually cost me an arm and a leg. One day it will be mine! For now, I at least have loads of other gorgeous tier sets I can use to feel the void.

This was a difficult one for me to pick and not because there were so many I liked. Quite the opposite in fact! I very rarely play my rogue so don’t have much of a feel for her or the class, and aesthetically most rogue sets just don’t appeal to me. This one has a touch of elegance, a beautiful corset with stunning gold details on a lovely blue.

So, I’ve noticed two things when it comes to Shaman Tiers. There’s an awful lot I don’t like, and most of the ones I do like are blue! This wasn’t an easy choice, and I’m kinda glad I haven’t raided as a shaman (sorry shaman’s!).

I have to admit, Blizzard did a good job with the fire theme for this tier. However, for most sets it just feels so over the top and over done. I like that this one is more subtle, there’s some fire and there’s the spider homage to one of the bosses. The webbing details on all the pieces stands out and the whole set just has a great effect.

I found it hard to distinguish between the warrior tiers, after a while they all sort of look the same to me – I’m sure plate users will say the same about cloth robes! This one stood out in two ways; the runic details and the helm. There’s just something very unique, and I like the ancient vykrul vibe.

I actually found that easier than I expected. There were a few classes that proved difficult because there were so many I liked, however, in the classes I play less it was either really hard to connect with them or only one or two actually stood out.

How about you? Could you choose just 1 tier for your class? Do you find that certain tiers you prefer over others – for example, I am drawn to tiers 2, 3 and 5 a lot.