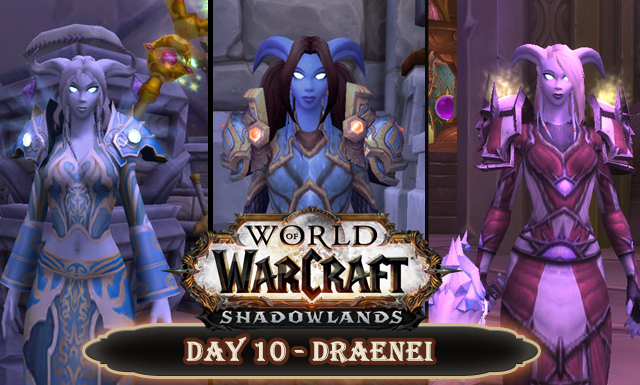 Hello everyone and welcome to day 10 of my 30 Day World of Warcraft Challenge that is counting down the days to the release of Shadowlands! Every day in November I will be posting about World of Warcraft based on the prompt list below. Today’s prompt is ‘draenei’ and I’m focusing on three World of Warcraft Draenei that I wish we knew more about.

I struggled more with this prompt than I expected, failing to find three draenei characters that I could list as being my favourites. I think part of the problem is that Warlords of Draenor and the subsequent expansions have shown many of the characters to be a bit too perfect and bordering on zealous. The Maghar Orc allied race quest, in particular, changed the entire way I view many Draenei characters that I liked and made me think way too hard about them. To be blunt; it made my head hurt.

So instead I’ve decided to talk about three draenei characters that I really like but realised that I don’t really know enough about them to label them as favourites just yet. These lovely ladies, because that’s just how it worked out, have something special about them and I want to know more. So please join me as I tell you more about them!

Ishanah caught my eye back in The Burning Crusade (TBC) when we were sent to see her if we picked The Aldor faction. There was something mysterious about this High Priestess that sat atop the platform in Shattrath, and then in the fight against Socrethar, she faced him alongside us. She perished in that fight only to be brought back to life by the disgraced paladin Kaylaan. Other than that one quest players only ever interact with her to be welcomed to the faction and hand in currency for reputation gain during TBC.

In later expansions, Ishanah still doesn’t play a big role despite being the head of a powerful faction. Other than a brief appearance in Wolfheart where she stood in for Velen as representative of the draenei people at the final vote to decide whether Gilneas should be allowed to rejoin the Alliance, we did not see her again until Legion. There she plays a slightly more active role as a champion in the Priest Order Hall campaign, although still taking a back seat compared to other characters, many of which were unknown until that expansion.

When the time came to take the battle to Argus Ishanah accompanied Velen and the other draenei on the Vindicaar where she served as an… innkeeper?! It still baffles me how Blizzard decided to use such a powerful and significant character as an innkeeper. It almost feels like she had to beg to be taken along;

“Well… we do need an innkeeper…”

As a priestess of the Light, I’m sure Ishanah considers nothing to be beneath her as long as she is helping someone in need, yet it is just another reminder of how underused she is as a character and how underdeveloped her character is. She was certainly considered important enough to be present at Antorus despite being a mere Innkeeper, so hopefully, this isn’t the last we’ve heard of the High Priestess and maybe next time she’ll get some actual character development.

As a protege of Exarch Maladaar, Tuulani pretty much exists as a quest giver in Warlords of Draenor. She’s there for players to bounce off of and eventually becomes a follower for Alliance players. Maladaar took her in as a child after she lost her family and he explains that she’s just coming into her abilities.

What attracted me to Tuulani is that she’s bright, eager and seems to realise that something’s going on at Auchindoun even before anyone else does. She’s smart enough and young enough to start to question Soulbinder Nyami’s actions rather than just accept them without question, especially when her focus seems to be on the wrong thing. In Auchindoun she doesn’t shy away from trying to stop the much older and experienced Soulbinder, thinking on her feet and rallying her allies to support the Alliance commander.

Once she becomes the Alliance player’s follower she’s seen during Yrel’s trial to become Exarch and that’s it. Like all the Draenei from that expansion, she’s been left behind. I’d like to hope that her ability to see things clearly and smart thinking means she didn’t head down the disturbing path revealed in Maghar Orc allied race quest. I think her experiences with Nyami will have made her see things differently, and I hope we get to find out what happened to her.

Another Draenei from Warlords of Draenor, Defender Illona was an Alliance follower who we only got the barest of information about. We know that she dreamt of joining the Auchenai and answered Exarch Maladaar’s call for aid. She grabbed her grandfather’s armour and set off to meet her destiny. Not long after that, we meet her battling two ancient spirits while trying to gain entrance to Auchindoun. After helping her win, and thus prove her worth, Illona pledges her loyalty to the Alliance Commander.

From there we only learn a little of her story through a couple of follower quests, such as how she got her armour. She seems like such an interesting character and it appears that we abandoned her on Draenor when we left. Did she join the Auchanei Order? Or did she leave with us and is wandering Azeroth? What was she doing before we met her battling spirits? I just feel like she had a lot more potential than a random follower.

I’m really looking forward to talking about Light-Forged draenei on day 21 because I kept thinking of a character and realising, nope, that’s a LF! Bugger!

How about you; do you have a favourite draenei from World of Warcraft ?

Next up tomorrow is ‘blood elf’, the other race added in The Burning Crusade expansion. Unlike the draenei, I had fewer problems identifying characters my favourite blood elf characters so pop back tomorrow to find out who they are!