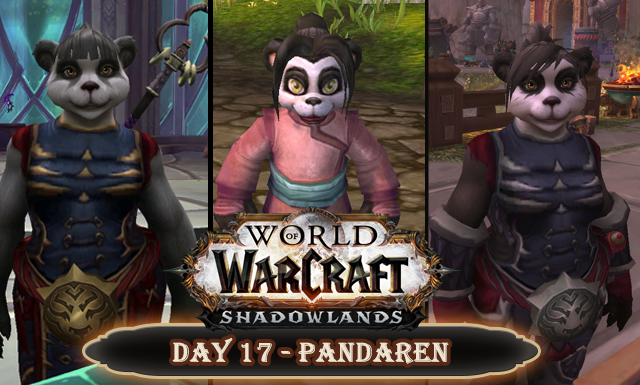 Hello everyone and welcome to day 17 of my 30 Day World of Warcraft Challenge that is counting down the days to the release of Shadowlands! Every day in November I will be posting about World of Warcraft based on the prompt list below. Today’s prompt is ‘pandaren’ and I’m talking to you about three fascinating pandaren ladies.

To answer yesterday’s question; I like pandaren. I’m not obsessed with them as I’ve known some players to be, however, I’ve grown up with a parent who appreciates Japanese culture and follows Shintoism so when Mists of Pandaria launched I really appreciated all the effort that went into the little nuances. I’m quite fond of a lot of pandaren characters, although when it came to whittling it down to just three it was these three pandaren ladies that stood out among their male peers. Let me tell you why 🙂

“Dear Chen, the monastery is my home. I am fond of Zouchin—and fonder now that you like it as well. But you, as a wanderer, must know that a true sense of home must be carried within. If one cannot spend a silent evening sipping tea and feel at peace, there is no geographical place that will confer that peace. We seek a place because it amplifies that peace. It shows us another face of it and reflects it back on us.”

Vol’jin: Shadows of the Horde

Until I read Vol’jin: Shadows of the Horde I didn’t really know much about Yalia. She was just another random quest giver, a member of the Shado-Pan who we met in Pandaria. In that novel, Yalia really got to shine, and I learned a lot more about the pandaren priestess. I found her to be a fascinating character filled with gentle wisdom that touches everyone she meets.

I learned even more about her past in the short story Trial of the Red Blossoms which tells the tale of how Yalia became a member of the Shado-Pan at the tender age of 5 years old. Even at such a young age she was wise and was very much aware that as the daughter of a fisherman her future held only marriage and children – unless she chose to do something about it. Her decision to make her own destiny was fuelled further when she realised that the two candidates for her hand in marriage had already begun to fight over her. It was a rivalry that wouldn’t end even after she married one of them Yalia realised. With the support of her grandmother, Yalia chose to leave the only home she had ever known and sought out the Shado-Pan Monastery. There she was taken in by Taran Zhu who gave her the name Yalia Sagewhisper.

It takes an incredible amount of courage to leave your home and walk a different path, especially one that goes against what your family expects you. To have the self-realisation and self-assurance to do it at such a young age shows such a deep level of wisdom and empathy for others. It is something that Yalia doesn’t lose, her kindness towards others never wavering and in Legion, she joins the Conclave at Netherlight Temple to help fight the Burning Legion.

“I hate this. When I was traveling, before Bo and I ran into trouble, it just felt right. I can’t accomplish anything, stuck here. Er, no offense, of course, Shen-zin Su.” Li Li patted the edge of the turtle’s shell comfortingly. “But there’s so much more out there!”

It’s not that I dislike Chen, it’s just that I find him just a little too boisterous for my liking. To begin with, Li Li drove me bonkers. She was this annoying hyperactive child who was everywhere and just didn’t shut up. Then I read the free short story Li Li’s Travel Journal, The Pearl of Pandaria and the novella Quest for Pandaria by Sarah Pine. I found Li Li not to be an annoying child but a young woman who wanted to do more, to see more and chaffed at the restrictions placed on her by life and her father. She felt invisible, ignored and overshadowed by everyone, especially her uncle Chen even though she loves him dearly. She was inspired by his adventures and started her own travel journal of the Wandering Isle, finding her own adventures, yet everyone always wanted to hear what Chen was doing, what Chen was brewing.

What most people don’t realise is that we wouldn’t have found Pandaria again if it wasn’t due to Li Li being herself. She was upset that her uncle Chen wouldn’t go adventuring with her (he claimed it was because he wanted a break when really it was because his brother was upset about the idea) and she started talking out loud, partly to herself and partly to the great turtle Shen-zin Su. Li Li never expected a response; she was just letting off some steam. What she got was an answer to her question; Is there a place somewhere that I could ever call home?

Shen-zin Su revealed a long lost fisherman who was clutching a mysterious pearl. Believing she knew what it was, Li Li snuck into the Great Library where it was being kept to see it for herself and while holding it she asked it could show her. The pearl showed her a vision of a place with architecture similar to The Wandering Isle yet geographically different; Pandaria. She had been right; it was indeed the legendary Pearl of Pandaria which had the power to grant visions. It had shown the fisherman visions of fishing spots and it had given Li Li the vision of Pandaria.

Believing it was her destiny to rediscover Pandaria, she took the pearl and headed off to find it. And as they say, the rest is history 😉

“Through you, is it? I think we can manage that. Would you prefer we go through the belly, or the ribcage?”

A dedicated and formidable fighter, Taoshi is considered to be the second in command of the Shado-Pan and has been referred to as ‘my best’ by the Shado-Pan Master Taran Zhu. There is no job too big or too small for her, with her skills lying in subterfuge and stealth. Those skills apply not only to battle and when Taran Zhu considered a mission on the Isle of Thunder too dangerous Taoshi sought support from the Horde and the Alliance to convince him. It was a plan that put her in the line of fire, however, as she predicted, it went off without a problem and gave them access to the mogu palace shipyard.

What fascinates me about Taoshi is her commitment to her work. She is relentless in her pursuit of the truth, constantly throwing herself into danger to ensure that she gets to the bottom of it. As a member of the Uncrowned in Legion, it is Taoshi that hunts for the real Matthias Shaw so that they could expose the dreadlord that is masquerading as him. In Battle for Azeroth, she’s in the thick of it again when the Vale of Eternal Blossom is under attack, leading another investigation to find out what is going on, this time in the Dreadwastes.

Thanks for reading today’s post and I hope you enjoyed hearing me waffle on about these fascinating panadren ladies!

How about you; who is your favourite pandaren character?

Next up tomorrow is I’m returning to Horde races as I talk about the honourable Tauren. See you then!