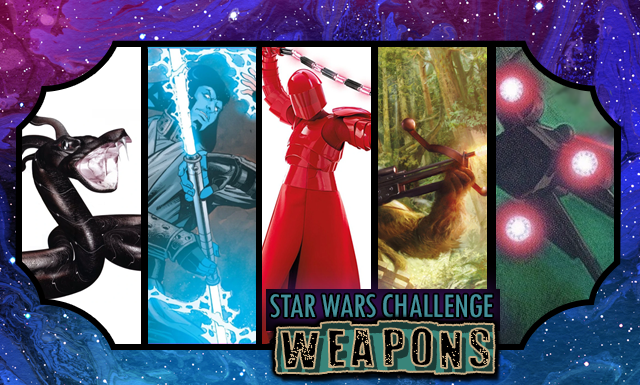 Hello and welcome to day eighteen of my Star Wars challenge! For the next 31 days, I’ll be posting once a day with a Star Wars themed post. Some days I’ll be talking about just one thing, other days it’ll be about 5 things based on the prompt of the day.

We all know I’m a big lightsaber fan; what other weapons do I like? I’ll be honest today’s prompt took me by surprise and it took me over a week to come up with 5. There are so many blasters in the Star Wars universe and guns just aren’t my thing. I almost ended up writing ‘5 Star Wars weapons perfect for the zombie apocalypse’, I kid you not.

In the end, I managed to find five and here are 5 unique weapons from the Star Wars universe.

This legendary weapon seen in the hands of Chewbacca in the Original Trilogy is based on the historical weapons of the Wookies. It is essentially the science fiction version of a crossbow, however, it packs one hell of a punch compared to a normal blaster through the use of magnetic acceleration. Other than being the Wookies tradition weapon it tends to be used more by them than other species due to the strength needed to heft and balance the weapon. A few non-Wookies have managed to handle a bowcaster, notably Han Solo in The Force Awakens.

A double-bladed lightsaber isn’t the same as a normal lightsaber. Special training was required by those who wielded this particular weapon, and it wasn’t an easy one to master. It came with as many strengths as it did weaknesses. While the weapon itself often served as a distraction or deterrent to foes who had never encountered one before, the length of the weapon prevented the user from executing certain movements that were easily done with a single blade lightsaber.

During the Yuuzhan Vong War the New Jedi Order developed a countermeasure for their enemies ability to detect and intercept normal proton torpedoes. The result was Jedi Shadow Bombs, a type of proton torpedoes that Jedi pilots would guide and detonate using the force.

One of the most terrifying things about the Yuuzhan Vong was that they were a type of enemy that the galaxy had never know, and in part, this was due to their use of biotechnology. Their weapons and their ships were made of biotechnology, and it gave them an unprecedented advantage against the New Republic’s weaponry during the first stages of the war. The amphistaffs were genetically engineered serpentine creatures that were not just weapons, they were a Vong warrior’s closest ally. They bonded with an amphistaff from its birth and using hand motions the warrior would instruct the amphistaff to change form in battle.

The amphistaff was poisonous and had three forms; a quarterstaff, a spear, or a whip. It was also able to withstand multiple blows from a lightsaber when in quarterstaff or spear form, and as a whip, it was capable of wrapping around a lightsaber blade without taking damage. This made it one of the most formidable weapons against Jedi, and they were extremely tough to destroy too.

I mentioned my admiration for the dynamic weapon of the Praetorian Guards in my post about lightsaber battles, so naturally, this one made the list. The versatility of the Bilari electro-chain whip made it perfectly suited to the Praetorian Guards, allowing them to attack or subdue as seen in The Last Jedi. The weapon locks into place to form a rapier, releases into a whip to enable them to bind someone or snare a weapon, and the electro-plasma current running through it provides an opportunity for torture if needed. The weapon was also lightsaber resistant, meaning it was likely to hold up to most other weapons too.

Thanks for reading about my thoughts on 5 unique weapons from the Star Wars universe. Tomorrow I’m going to be taking you on a guided tour of my favourite planets of the galaxy!

What did you think; are there any other unique weapons you can think of?