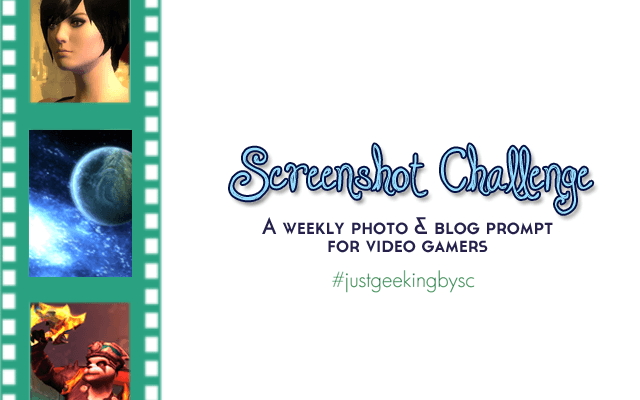 The first month of Screenshot Challenge has now finished and it’s time to wrap up! If you’ve been following me on social media then you’ve probably seen all this, but I wanted to document it all here too. You’ll also find April’s prompt at the end of the post. Enjoy!

I’m currently playing Guild Wars 2 with my fiancé. I’ve played most of it including the Heart of Thorns expansion, and this is his first time playing it. We’ve just finished the Living World seasons set before Heart of Thorns, and just heading into the expansion.⠀
⠀
This is a screenshot from the cinematic trailer for Heart of Thorns featuring members of Destiny’s Edge and Trehearne.⠀

The most beautiful city in a game I have ever seen is the floating city of Columbia in Bioshock Infinite and I’ve seen a lot of pretty cities. This one just stands out from the rest; probably due to the amazing quality of graphics in the game itself.⠀
⠀
What is your favourite city in a video game?⠀

There’s a lot of game stuff I associate with green; dragons, druids, hunters, necromancers – but the one that always sticks out? Dragon Age: Inquisition. If you’ve played the game, even a little bit, then you know what I’m taking about!

This screenshot from World of Warcraft is such an epitome of my luck in the game that I laughed out loud when I found it. ⠀
⠀
I have a history of being lucky with some mounts, and I was one of the first on my server to get this mount, the Headless Horseman’s mount. The gear my main is wearing also has it’s own story of luck attached to it. I had just joined a guild when this staff, Staff of Immaculate Recovery, dropped. I think it was literally my first run and due to some rule, or some technicality related to DKP, it went to me. Instead of the other priest in the raid who had been waiting for it for ages… it was pure luck that it happened that way. It sucked for the other player, and I’ve been in a worse situation so I feel for them, but people still remember that this happened 😛 ⠀
⠀
How about you? What does luck mean to you in a video game? Are you lucky with gear and rolls? Tell me your stories and don’t forget to share your screenshots!⠀

I took some inspiration from April’s calendar and events to put together this months prompts. It’s National library week in the US from 2nd – 8th, so that prompt is asking you to represent your favourite lore. The 12th is National Pink day, so pink is the colour of choice this month. You guessed it, rabbit is for Easter and the Brits among you might recognise the significance of Dragon on the 23rd. It’s St George’s Day and St George slew the dragon. And finally, Pay it Forward Day is at the end of the month (28th) so the final Sunday is dedicated to friends! I can’t wait to see what people come up with and hope you’ll enjoy following me along on social media, especially instagram with the hash tag #justgeekingbysc.